A bowl of lettuce, edamame beans, cheese, carrots and tomatoes with a drizzle of olive oil awaits freshman Christine Hensley every day for every meal in the dining hall.

She’s not trying to be healthy.

She’s not afraid of variety.

On campus dining options are frequently gluten heavy items such as pizza, pasta, and sandwiches.

Although eating gluten-free can be difficult in any living situation, Hensley said it is much harder in the dining halls.

“Everything in my house was always gluten-free, so I never really had to think about it,” Hensley said. “Now I have to be mindful of it.”

One tool SMU Dining offers to help students be more conscious about their food choices is posting the daily menu, along with each items nutritional facts, on their website.

There are different icons such as Eat Well, Fat Free, Low Sodium, Vegetarian, and Vegan, but there is not a Gluten-Free icon.

According to Beyond Celiac, only about 1% of the American population has Celiac disease, a condition that has no medical cure other than eating a 100% gluten-free diet. However, according to a Gallup poll, one in five Americans tries to incorporate gluten-free foods into their diets.

The rising numbers of Americans eating gluten-free diets or trying to minimize gluten makes the lack of gluten-free options in the dining halls difficult for many incoming students.

The majority of people who eat gluten-free do so by choice, often due to sensitivity, and such is the case for sophomore Davis Wells.

Wells said he feels better when he eats gluten-free and thinks it is possible to eat gluten-free in the dining halls if you aren’t picky.

“They always have eggs, gluten-free bread for sandwiches, and a gluten-free or vegan station,” Wells said. “Most people complain about diversity in that category.”

For sophomore Piper Hamill, her freshman year experience with the eating gluten-free on campus was so frustrating and expensive that she was able to get out of having a meal plan and now lives in an upperclassmen dorm with a kitchen.

“I had to prove to the university that the dining hall did not provide me with enough options to maintain my diet,” Hamill said.

After reviewing Hamill’s case and being in constant communication with her doctor, the university decided upperclassmen housing was the best option for her circumstances.

Hamill is one of the 1% who has celiac disease, so she has been on a completely gluten-free diet for the past two years.

“I believe the dining hall has adequate gluten-free options for students who choose this diet, but not for those who have to eat gluten-free,” Hamill said.

SMU tries to provide options for gluten-free students such as the gluten-free pantry in Umphrey Lee, but to Christine Hensley, this option falls short.

Hensley said that the majority of the options available inside the gluten-free pantry are frozen meals.

“Microwavable food is just not very good,” Hensley said with a grimace.

Hamill and Hensley both had suggestions for how the dining hall can improve the experience for gluten-free students.

“They just need to incorporate,” Hensley said. “For whatever meal they’re providing that day, have a gluten-free option.”

Hamill said it was particularly hard to eat in Arnold, where there is not a designate gluten-free meal every day.

“The dining hall should extend the times during the day that the gluten-free meals are offered and there should be more than one option for each meal,” Hamill said.

One resource SMU does have in place for students is access to an on campus dietitian who can help them figure out how to eat a balanced diet on campus and grant them access to the gluten-free pantry or help in special cases like Hamills.

All three students met with the dietitian, but for Hensley it did not make eating gluten-free on campus seem easier.

“Meeting with the dietitian made me feel confident about the gluten-free environment on campus,” Hensley said. “But in reality, I was let down by the gluten-free options provided.”

Posted on November 30th, 2016 by Guest Column
ShareTweetShare on Google+Pin on PinterestSend with WhatsApp

UPDATED: All Classes CANCELED Wednesday; Faculty Urged “to be Flexible”

In case you missed one of Hollywood’s most notorious nights, here’s a look back at what you missed at the 90th Oscars Sunday. END_OF_DOCUMENT_TOKEN_TO_BE_REPLACED 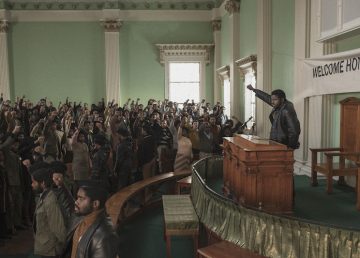