In the Temerlin Advertising Institute, creativity isn’t hard to come by, and what better way to fuel student creativity than in Willie Baronet’s “Intro to Creativity” class.

“We are mainly taught that anyone can be creative,” said advertising student Erin Robinson. “A lot of people feel like they have creative limitations and we are taught to adapt to those and overcome them by different creative techniques.”

Baronet’s creative influence stretches beyond the classroom. A look inside his office reveals walls covered with past student projects.

“I pull stuff that people leave behind that I like and just put it on the wall,” Baronet said. “There are some hats from a project I assigned from a previous intro to creativity class…there are mind maps which is another assignment that happens…”

In his personal life, Baronet has put his creativity to a unique project. For the past 25 years, he has been collecting homless signs for a project he calls, “We Are All Homeless.”

“It really just started with a way to deal with, I didn’t like that I was ignoring them,” Baronet said. “This was one of those weird ideas, and I started to do it and once I started I couldn’t stop.”As humans it’s easy for us to want to put people in a box, there is a human being on the other side of this sign, you truly don’t know anyones story until you know their story.”

Baronet’s work has been featured in various exhibits across the country and even inspired multiple Ted Talks and a documentary called “Signs of Humanity.”

“I had no idea that we would get that kind of media attention, what it tells me is that everybody cares at some level,” Baronet said.

“Maybe there’s some part of all of us that feels homeless, Baronet said. “Even if we have a place to sleep and and so forth, there may be some piece of all of us that connects to what it means to miss some essential part of home.”

Posted on December 4th, 2018 by Cassidy Najarian
ShareTweetShare on Google+Pin on PinterestSend with WhatsApp
52 recommended

Posted on December 4th, 2018 by Cassidy Najarian
#advertising, We are All Homeless, Willie Baronet

Meet Brandon Cohanim: The SMU student who turned his dreams into reality before graduating college

How Advertisers Find You Online

After being recalled from her London study abroad program, Pooja Tewari reflects on her memories at SMU. END_OF_DOCUMENT_TOKEN_TO_BE_REPLACED 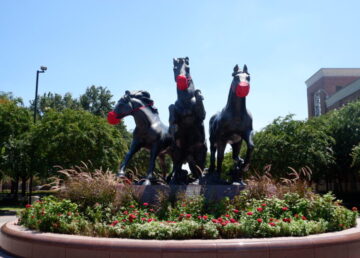 SMU lifted its mask requirement on campus Tuesday, May 18, according to a university announcement. END_OF_DOCUMENT_TOKEN_TO_BE_REPLACED