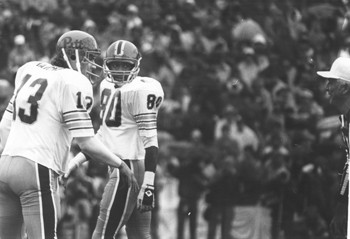 Pitt quarterback Dan Marino (13) argues the spot of a ball with the referee while Julius Dawkins (80) looks on.

This article was originally published in the Wednesday, January 19, 1983 edition of The Daily Campus – the first issue after the 1983 Cotton Bowl.

The Pitt Panthers should have realized that it wasn’t going to be their day when they drove to the SMU one of the game’s opening drive and fumbled. When Eric Schubert missed a chip-shot field goal from 24 yards out one quarter later, that should have driven the point home.

After all, they were playing the Team of Destiny and it was the Mustangs’ destiny to win the Cotton Bowl.

They did. The SMU defense, whose outstanding performance all year was overshadowed by Eric Dickerson and Craig James, shut out Pitt’s All-America quarterback Dan Marino and Lance McIlhenny provided the winning touchdown with the same option run that put the Mustangs in the Cotton Bowl.

It was a day that had many distractions. Several senior players, like James, Dickerson and Marino, were playing the last game of their college careers – they wanted to go out winners to springboard them into the NFL. For most of the other senior players, however, like Sterling Wilson, Lott McIlhenny, Jeff Courtwright and Charles Drayton, this would be their last football game – ever.

And, of course, in the minds of SMU players and fans, a national championship was on the line.

The weather was more suited for Buffalo or New England with the rain, sleet and cold keeping 11,118 of the sellout crowd of 71,477 at home to watch the game on television. Those same miserable football conditions slickened the field and ball, numbed some hands and turned what was hyped to be an offensive showdown between the Pony Express and Marino into a game of defense. And character. And desire to win.

It was a day that pitted two teams with new coaches – one, coach Foge Fazio of Pitt, who began the year with the monkey on his back after his Panthers were the preseason pick to be No. 1. The other, Bobby Collins, a country coach who came to the big city from Mississippi to help SMU meet some goals. Both felt the pressure New Year’s Day.

Operating under the philosophy of bend but not break, the SMU defense executed its game plan perfectly. Marino threw deep only once, an incompletion to Dwight Collins, and was forced to move the Panther offense with shot passes to backs Bryan Thomas and Joe McCall coming out of the backfield. The Mustang defense bent a little, 285 yards, but kept the Panthers out of the end zone.

I can’t say enough about our defense,” Collins said. “They have played well all year. The offense has gotten most of the publicity but when we really needed a lift, the defense has always risen to the occasion.

Pitt put a lot of pressure on us, with the one-back backfield, but they were never able to go deep on us.”

SMU challenged Marino’s arm and the notorious speed of his two favorite receivers, Collins and Julius Dawkins, with man-to-man coverage. The game plan worked – Dawkins didn’t catch a pass and Collins caught only two. And they kept the receivers covered long enough to enable noseguard Michael Carter to penetrate and sack Marino for a nine-yard loss. It was the first time Marino had been sacked since early in the season.

After a scoreless first half, the first in the Cotton Bowl since 1961, Pitt finally got on the board first with a 43-yard field goal by Schubert late in the third quarter.

The game was like a boxing match between two heavyweights, both with enough power to knock the other one out with the right punch. Pitt, with 4:34 left in the third quarter, had managed to land a light jab to the jaw of SMU.

But the patient Mustangs kept stalking, waiting for the right time to make the K.O. punch.

The fourth quarter had been one of SMU’s best all year; it had seen them come from behind to beat Baylor, Texas, Texas Tech and TCU and to tie Arkansas. Perhaps this day it would see them beat Pitt and bring home a Cotton victory.

Both teams had traded punches throughout the day. Pitt took the ball from its own 28 on the game’s initial drive to the SMU one. Wes Hopkins, the game’s most valuable defensive player, recovered McCall’s fumble at the one and SMU took up almost the entire first-quarter with a 21-play, 91-yard drive that lasted 9:35 before it ended with McIlhenny’s fumble at the Pitt seven.

The Mustangs responded to Pitt’s field goal with the game-winning drive. In throwing the opening punch, the Panthers had opened themselves up for the knockout punch.

The Ponies started from their own 20. The drive that was about to ensue would prove to be a microcosm of the entire season.

It was Dickerson’s series to start at tailback and he began the drive with runs of five and seven yards over the right side. McIlhenny was run down by Pitt lineman J.C. Pelusi for a six-yard loss and then Dickerson ran for three.

That set up the first of two big plays by McIlhenny, the game’s most valuable offensive player, and the Mustangs’ miracle worker, Bobby Leach.

Third and three at the SMU 29. McIlhenny, under pressure, rolled right and made a jump pass down the right sideline to Leach over the head of Pitt defender Troy Hill at the SMU 49. First down.

On the next play, it looked like the momentum that had just swung SMU’s way went right out the window as the Pitt defense read SMU’s double reverse and dropped Leach for an 11-yard loss back to the 28.

Second and 21. Collins didn’t want to call it at first, but offensive coordinator Whitey Jordan, from his perch high above the field in the press box, had seen something. He called a 16X Z up…a pass into the wind to Leach. Jordan thought it would work. So did Leach. Finally, Collins agreed.

“I’d like to say that was my idea,” said Collins, “but Coach Whitey Jordan called it down from the press box. I almost vetoed it. It was near the end of the quarter and we were about to get the wind but Whitey said they were playing us close and he thought it would work.”

Leach faked inside and got behind his man and looked up to see McIlhenny’s pass floating down right on target. He caught it and stepped out of bounds at the Panther 20.

Dickerson moved the Mustangs to the 12 with runs of three and five yards and the James took a pitch left out of the power-I formation and began toward a gaping hole that led to the end zone. James rounded the left side but came sliding down on the wet turf at the nine, sot of his destination but enough for a first down.

On the next play, out of the power-I again, it was neither James nor Dickerson, but McIlhenny who faked a pitch then turned toward the goal line. Nine yards, a broken tackle and an extra point later, SMU led 7-3 with 13:43 left in the game.

Pitt didn’t stay down for the count – there was plenty of time left. Enough for two tries to get the go-ahead touchdown. They, too, wanted to end their season and careers as winners. One drive, a 13-play match to the SMU seven, ended in an interception by Blaine Smith in the end zone. Neither drive ended with a Pitt touchdown.

Finally, the last second ticked off the clock. 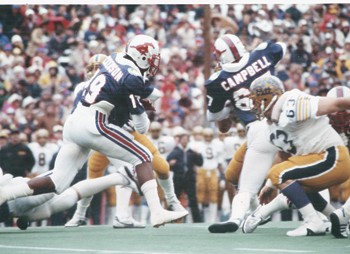 Running back Eric Dickerson runs the ball. Dickerson was named CBS’ offensive player of the game. 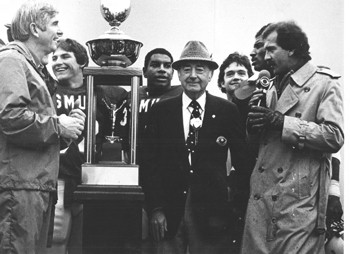 Head coach Bobby Collins (far left) is presented the Cotton Bowl trophy by Field Scovell (center) of the Cotton Bowl committee. Pat O’Brien (far right) of CBS emcees the trophy presentation for the national television audience. Craig James and other members of the SMU team stand in the background. 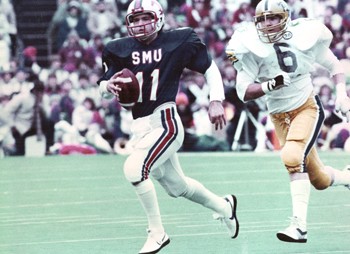 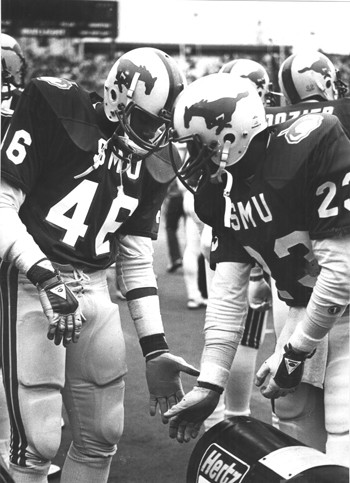 SMU defensive backs Wes Hopkins (46) and Blaine Smith (23) try to keep their hands warm in the near-freezing cold and rain on the sidelines. 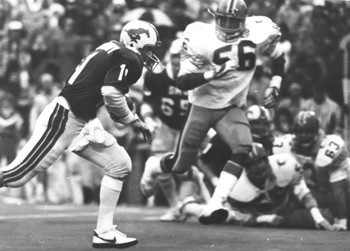 Posted on November 9, 2007 by HILARY HIRSCHFELD
ShareTweetShare on Google+Pin on PinterestSend with WhatsApp
2 recommended

Posted on November 9, 2007 by HILARY HIRSCHFELD

A rare super senior, Richard Moore’s seventh year of college football will play out as both a personal triumph and interesting case study

Richard Moore will be a super senior for SMU this season. Made possible by COVID-19 and injuries, Moore will be a case study for life in a 2021 college football landscape. END_OF_DOCUMENT_TOKEN_TO_BE_REPLACED