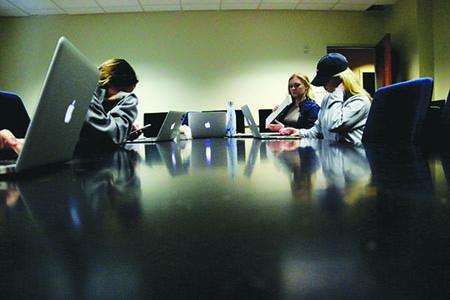 Feeling sick? Family emergency? Have to leave town for an interview? Most college students have days when they cannot make it to class.

SMU junior Julie Marino had one of those days recently. She woke up sick and thought she may have caught the flu that was spreading across campus like wildfire. She debated whether she could make it to class, even though she felt awful.

“One of my professors told my class that if we miss more than once she’ll drop us from the class entirely,” Marino said. “I made myself get out of bed because I couldn’t afford to miss.”

How students are penalized for absences at SMU differs among professors and departments. SMU does not have an official attendance policy for the university, according to the SMU Student Affairs website. Attendance instead is at the discretion of the professor.

The medical class excuse policy of the SMU Dr. Bob Smith Health Center states: “Each of your professors will have his or her own attendance policies. We do not provide documentation for granting excused absences from class.”

SMU does implement one university wide attendance policy. Students who participate in official university extracurricular activities, including athletics, or practice religious observances are given opportunities to make up work if they must miss class.

Beyond that, the diversity and inconsistencies among attendance policies can cause ambiguity. Syllabi get confused and students mix up which classes they can afford to miss more than once.

Junior Haley Ware is a pre-med major who believes students should not have to adhere to strict attendance policies, an opinion many other students share.

“We are in college now, it’s the time in our lives where we are expected to make choices for ourselves,” Ware said. “That includes when we go to class.”

Religious Studies professor Richard Cogley agrees that students should be mature enough to make their own decisions. Professor Cogley has been teaching at SMU since 1987 and has never enforced a strict attendance policy.

“Learning to take responsibility for your actions is something undergrads need to learn,” Cogley said. “And those students who don’t learn it, usually get bad grades.”

Still, most teachers do have some sort of attendance policy built into their syllabi. In the Advertising department of the Meadows School of the Arts, for instance, an introductory course follows a strict attendance policy. It allows for two unexcused absences, no matter the circumstances.

“You are allowed up to two absences for any reason, including, but not limited to illness, accident, emergency, official university absence, or just skipping class. If you miss class more than twice—regardless of the reason—you will lose two points for each additional absence from your final course grade,” the ADV 1300 syllabus reads.

Students also point out that the differences between excused and non-excused absences can be another gray area. Real Estate Finance major Riley Tomeny has an 8 a.m. class that only allows one absence. She believes different classes should be able to enforce different policies.

“I do understand that some classes clearly demand more involvement and in-class work, so it makes sense that those classes have stricter attendance rules,” Tomeny said.

Some teachers say that there are good reasons to enforce attendance policies. College is the stepping-stone before students enter the work force, where tardiness and absences are not nearly as tolerated.

“Good class attendance is not only preparation for the real world, where absences can lead to job loss, it’s also vital to getting the most out of a course,” Dedman College professor David Brockman said.

The general consensus is that a single, uniform university-wide policy would not work. Chaplain and Interim Dean of Student Life Steve Rankin said professors are protective of their right to enforce specific rules in their classrooms.

“It is often the case that professors do what they think is best, and so such attendance requirements are hard to enforce,” Rankin said. “It’s pretty difficult for faculty, especially tenured faculty, to ‘get in trouble’ if they don’t adhere to some general attendance policy.”