On Sept. 30, 2015 in McFarlin Auditorium, SMU’s Tate Lecture Series hosted a batch of political thinkers to talk about current political events and the state of both national and international affairs.

David Gergen, CNN’s Senior Political Analyst, served as the mediator for the night, while both Richard Haass, the President of the Council on Foreign Relations, and Condoleezza Rice, who served as the 66th U.S. Secretary of State and is now working as a Stanford University faculty member, answered questions asked by both Gergen and audience members. 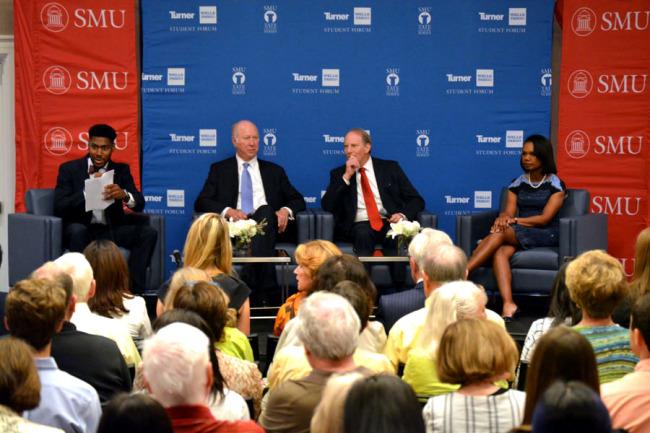 The night began with Gergan asking Haass and Rice to give a four to five minute statement on how they see the world evolving at the current moment. Haass compared the state of the world to that of a stock in the stock market; our stock (the world) has not crashed, but it has certainly decreased in value over the recent years.

He said that the world is disorderly and messier than it has been in a long time due to globalization issues, new technologies, rising and declining powers, issues in the Middle East, and issues in policy, both foreign and domestic. In Haass’ opinion, respect for the U.S. is down, and because of the distribution of power among many different people in the U.S., it takes a long time for decisions to be made and things to be accomplished.

On the other hand, Rice discussed the “four shocks,” in her opinion, that have led the world to where it is today. According to Rice, due to issues with un-governed areas, new and greater threats are being presented to the United States. Along with this, the crash of the stock market in 2008 caused a realignment of what people think they need from government. Additionally, the shock of a dysfunctional Middle East and great powers, such as Russia and China behaving badly, have caused, according to Rice, the world to go in the direction it is today.

Throughout the discussion, Gergen asked Haass and Rice questions about both U.S. and international political issues, such as the issue of refugees traveling from Syria. Additional questions focused on Rice and Haass’ thoughts on what Putin and the Russians are doing in the Middle East, and the impact that Russian decisions will have on the U.S.; China and its international role; Clinton and her email scandal; Trump and the possibility of him becoming a presidential candidate for in the upcoming elections; and other political questions tweeted from the audience during the presentation.

Rice, who felt passionately about the issues currently arising with Putin in Russia and his claims that the U.S. made decisions with the same motivation as he did, exclaimed, “I refuse to accept any more equivalence to Vladimir Putin,” yet also acknowledges that that the U.S. has “made mistakes,” but has done so in the pursuit of making a better world.

While talking about domestic affairs, Rice and Haass had differing opinions on some topics. “We have become divided and dysfunctional,” says Haass about the U.S. “It is because of what those in D.C. are not doing in office.” In response, Rice retorted with “at least we get the chance to elect them,” them being politicians who work in D.C. and make the nation’s decisions.

Of course when asked about Trump, both Haass and Rice did their best to avoid direct comments about the idea of his presidency. “The presidency is constraining in ways that we don’t understand,” says Rice. “Even someone who has come to disrupt American politics [Trump] would still have constraint in office.”

The night ended with live questions from the audience and questions tweeted throughout the night. The panel members, Gergen, Rice, and Haass, were all met with a standing ovation from a rapt audience who hung on to their every word.

As a part of the Tate Lecture Series, the night was clearly a success. In its 34th season, the Tate Distinguished Lecture Series will continue to “nurture intellectual entrepreneurship” by bringing “thought-provoking and entertaining icons to the SMU campus and to the Dallas community.”