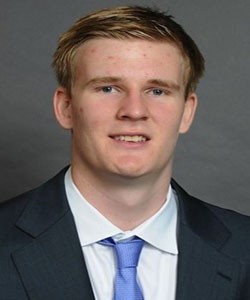 Australian forward Harry Froling, who announced he would transfer from SMU in December, is taking his talents to the Big East.

Per multiple reports, Froling has committed to Marquette after visiting the Milwaukee campus over the weekend. The 6-11 Aussie committed to play for the Golden Eagles after visiting Oregon State before Christmas and canceling a visit to Dayton earlier this month.

Excited to announce that I will be transferring to Marquette University! Excited to become a golden-eagle! 〽️

What attracted Froling to Marquette over Oregon State?

“Just an unbelievable vision for the future there,” Froling told The Daily Campus.

Froling will be eligible to play in the second semester of the 2017-2018 season. Per Fox Sports Australia’s Olgun Uluc, Froling is expected to appeal to the NCAA in order to become eligible to play for all of his sophomore season.

Per ESPN’s Jeff Goodman, Harry Froling has told ESPN he will visit Oregon St. on Dec. 21 and Dayton on Jan. 5. Neither school originally offered Froling a scholarship during his recruitment.

“I have loved my teammates and my coaches here at SMU, but I was hoping to play a much more significant role than the one I have here now. It was a big sacrifice for me to leave Australia and come to the United States, so this has been very difficult for me. I am going to look at all of my options collegiately and professionally back home.” — Harry Froling

One of the biggest pieces from SMU’s 2016 recruiting class will be taking his talents elsewhere.

Per Fox Sports and Scout.com’s Evan Daniels, Australian forward Harry Froling will transfer away from SMU.

SMU freshman Harry Froling has opted to transfer, per multiple sources. Was a four-star prospect coming out of Australia.

Froling signed with the Mustangs as one of the top rated international prospects of the last recruiting cycle. A four-star prospect according to Scout.com and Rivals.com, Froling trained at the Australian Institute of Sport and had played a season in Australia’s National Basketball League. Froling was also a participant at the 2016 Nike Hoop Summit.

Can confirm this is happening. Harry Froling leaves after 10 games at SMU. https://t.co/ogS6tnjvcs

Froling’s departure comes only 10 games into the season. The 6-11 freshman has played 146 minutes this season and is averaging 4.3 points per game and 3.2 rebounds per game.

SMU head coach Tim Jankovich praised Froling for his growth and contributions this season following the Mustangs’ win over TCU on Dec. 7.

“I think Harry is getting better and better and more confident,” Jankovich said postgame. “The only reason why Harry sometimes doesn’t play more is because Semi and Ben are playing so darn good.”

Duke transfer Semi Ojeleye and senior Ben Moore have received a majority of the playing time in SMU’s frontcourt this season. Ojeleye and Moore are averaging more than 30 minutes per game respectively. Both also average scoring in double figures.

SMU entered the season with only nine scholarship players on its roster. With Froling leaving, the team’s depth will be strained more than ever, especially in the frontcourt. Ben Moore is now the tallest scholarship player on SMU’s roster, standing at only 6-8.

According to 247Sports.com, Froling received offers from SMU, Arizona, Colorado, Illinois, Wake Forest, Creighton, Clemson, and Wisconsin. It is unclear whether Froling will look to transfer to any of these programs.

Froling is the third SMU player to transfer away from the program in the last two seasons. Freshman guard Sedrick Barefield transferred to Utah in December of 2015 after playing only 16 minutes through five games in a Mustangs’ uniform. Junior guard Keith Frazier left the program for North Texas a month later in the wake of the NCAA investigation that led to SMU’s postseason ban.