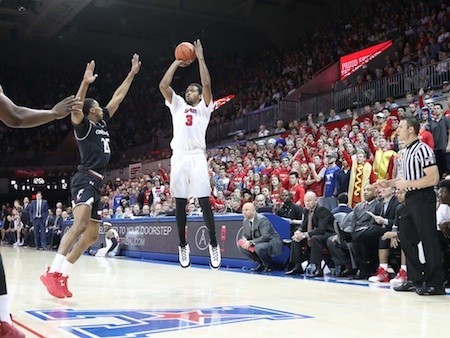 In a game of long scoring runs, the victory normally goes to the team with the toughness to weather the storm. At some moments in Sunday’s clash of two ranked teams, SMU looked on the verge of being able to bend no more. The Mustangs made a run to tie the game entering the locker room, but SMU looked like it was about to break shortly after the half.

At that point, Cincinnati’s guards were firing on all cylinders, putting on a three-point spectacle for a record breaking Moody Coliseum crowd. Three SMU turnovers in the opening minutes allowed the Bearcats’ three-point barrage to extend the lead back to nine.

Then Sterling Brown checked back into the game.

Brown, who had picked up his third foul early in the second half, subbed back in to stop the bleeding. His defense along with Ben Emelogu’s showing in the following minutes served as the ultimate momentum shift.

Emelogu hit a three to cut the lead to six. A few steals and timely rebounds later, he hit another three to give the Mustangs a four point lead. A dunk from Emelogu off the lob gave SMU an eight point lead and set The Mob and the entire building ablaze.

Armageddon had come to Moody, and Cincinnati began to wilt.

Brown recorded a double-double with 13 points and 10 rebounds while Emelogu added 11 points off the bench. Forward Semi Ojeleye led the Mustangs with 18 points in SMU’s 60-51 win over 11th ranked Cincinnati.

“I fed off my team and the big shots went down,” Emologu said in the postgame press conference. “We went up and we started locking in on defense. We took over the game.”

SMU head coach Tim Jankovich said that his team’s defense in the second half was the best it has been all season.

“It looked like an Iron Curtain out there,” Jankovich said postgame.

The Mustangs have held their last 19 opponents to 66 points or less. Cincinnati was held without a field goal in the final four minutes.

“That’s something we call, ‘winning time,'” Emelogu said. “We came together and said we have to get kills. Three stops. We got it done.”

The Mustangs allowed Cincinnati to shoot 46 percent from the field in the first half, but only 26 percent in the second. Meanwhile, SMU shot dramatically better after halftime, following up a 31 percent first half with a 63 percent second half.

“It was a make or miss game,” Cincinnati head coach Mick Cronin said postgame. “We let our offensive struggles affect our defensive energy. We got flat-footed on defense in the second half. In my opinion, SMU is top 15 in the country, hands down.”

“I think it shows that we’re tough,” guard Shake Milton said postgame. “The thing I love about our team is that we’re so encouraging to one another. We always got each other’s backs.”

Toughness is required to earn a win against Cincinnati, a team that entered riding a 15-game winning streak, having not lost since before Christmas.

The toughest Mustang? Ben Emelogu has a good idea.

“Coach will tell you himself that Sterling Brown will fight you in a card game,” Emelogu said.

Brown’s minutes were instrumental in the victory, as SMU runs coincided with the senior guard hitting shots, grabbing rebounds and denying any open looks on defense.

A record-breaking 7,518 SMU fans in attendance also made a serious impact. From the moment former President George W. Bush took off his jacket to reveal a “The Mob” t-shirt, the roar of the crowd never stopped. For a third time since Moody Coliseum reopened, Moody Magic consumed the Bearcats.

A new member of "The Mob" revealed himself today pic.twitter.com/VwmAUlRmji

“Man, that was crazy,” Milton said. “That was fun. That was really loud. When you have fans like that, it makes playing at home crazy fun.”

“I’m not sure how many points they scored or how many steals they got, but it was some,” Jankovich said, referring to the crowd’s energy. “That crowd was fantastic. We were rated last year before the season as the toughest homecourt in the league. It’s amazing what it does for the energy of your guys and their confidence.”

The win moves the Mustangs to 12-1 in American Athletic Conference play and vaults SMU into first place in the conference standings. The Mustangs have now won 18 of their last 19 games and are tied for the 5th longest active home winning streak in the NCAA.

SMU has lost only four games at home since the start of the 2013-14 season.

Even so, winning streaks are not on the mind of Jankovich, with him acknowledging the rest of his team’s conference slate poses many challenges. Jankovich hopes this win will allow people to see how far the Mustangs have come.

“I want our guys to get what they deserve,” Jankovich said. “I thought they deserved to be ranked in the top 25. I love the fact that they won today because, you know what, more people will be talking about them. More people will respect them. I think that not enough people around the country are really digging in to what they’re doing. The reason I feel so great is I think they deserve all the great things that happen for them. That’s really fun for me.”