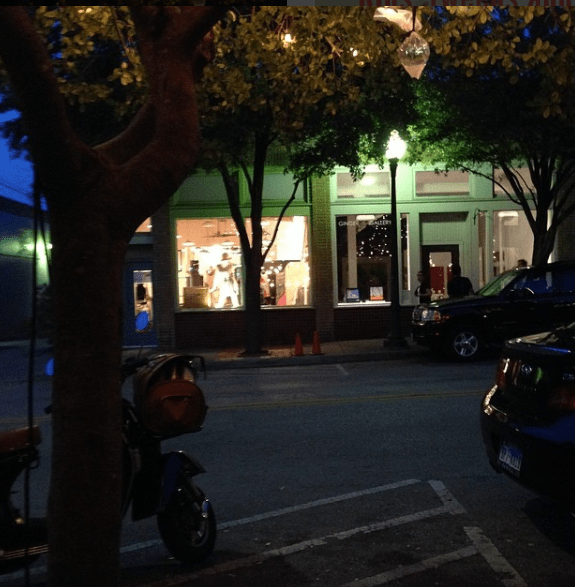 It’s a sleepy Saturday night between Tyler and Zang. A few well-dressed pedestrians are wandering the chilly streets around 7 p.m., peeping into the storefronts and occupying a few seats at the various eateries and bars populating Bishop Ave.

Caught between harvest décor and Christmas lighting, the squatty blocks of the Bishop Arts District are awash in a mix of oranges, reds, greens and yellows. The street is silent as a prayer, true to its name.

But on the corner of Bishop and Seventh sits an anomaly.

“Let’s play a singing number,” says a young musician to his band.

They look at each other and talk in that mostly telepathic way bands do, then launch into an energetic tune.

The three musicians are arranged in a semi-circle, with amps and speakers punctuating the spaces between them. A string of lights sit in front of their formation creating an ellipse of strobing colors and music.

Theirs is a small island of sound in an otherwise sleepy street.

The drummer sits on a wooden chair with multi-colored upholstery that matches the twinkling lights. He taps on a circular pad resembling a DJ’s turntable with deft fingers. There are small divisions on the face of the drum machine, like a plate that keeps your peas out of your mashed potatoes. Each partition launches a different percussive sound through the old black speakers. From afar, it sounds as if there is a whole drum kit here. A bedazzled peace sign hangs from the drum machine’s stand and a small half-globe LED casts colorful splotches round the island from its position under the sign of the flower children.

The band’s funky renditions of old favorites elicit a smattering of applause from the 10 or so chilled hands surrounding the island, but the band’s shiny silver bread jar remains largely unperturbed.

The night wears on. People come and go and come again. There is a family particularly taken with the music sitting in the shallows, their little ones dancing to the music upon the island’s paved shore at Seventh and Bishop. Eventually they wander away. After a few more songs, the manager from the mainland arrives to quiet down the band. The natives had been complaining about the noise. The islanders grumble a bit, wishing fragile ears would stay away, then they put down their instruments in favor of beers.

Walking the streets with his wife nearby, there is a man who helped build these houses. He loves the neighborhood. He pulls his wife close, reveling in the fruit of his labor. He remembers when his father-in-law scoffed at him for moving to Oak Cliff back before the money started rolling through like breakers in the Gulf. His wife remembers too. She remembers the worry and the uncertainty. But that’s all gone now. Now, there are well-lit streets and full coffers between Tyler and Zang.