In the basement of the Owen Arts Center behind a seemingly ordinary gray door lies a magical treasure trove that few students outside of Meadows know about. Entire rooms are packed with hundreds if not thousands of costumes from SMU plays, operas and dance recitals. Dresses, doublets, vests and pantaloons that seem to have been lifted straight out of a history book or old painting are hanging on racks and hidden away behind cabinets.

There are also accessories like hats, gloves hoopskirts in the rooms and rolls of fabrics of intricate patterns and bold colors. The fabrics will be used for designs that will soon be brought to life.

This little corner of campus is the Meadows Costume Shop. It’s a unique and exciting wonderland for student’s seeking costumes old and new for a production. It is also a place for graduate design students to practice their craft. 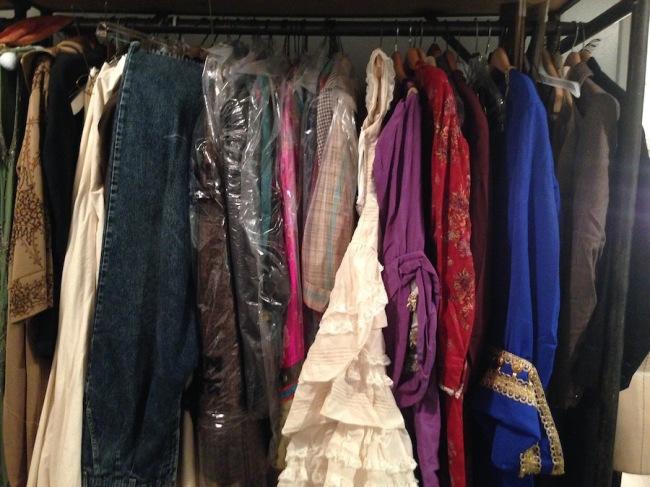 “I think what I most like about the costume shop is the welcoming and creative atmosphere it has,” said graduate design student Amanda Macarthur.

The main room is filled with design supplies, sewing machines, mannequins and in-progress costumes. There are also a few faculty offices and a special corner for costume laundry and fabric dye. 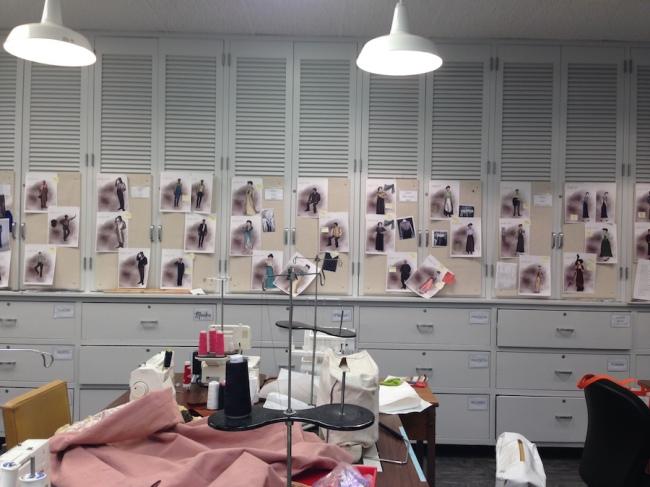 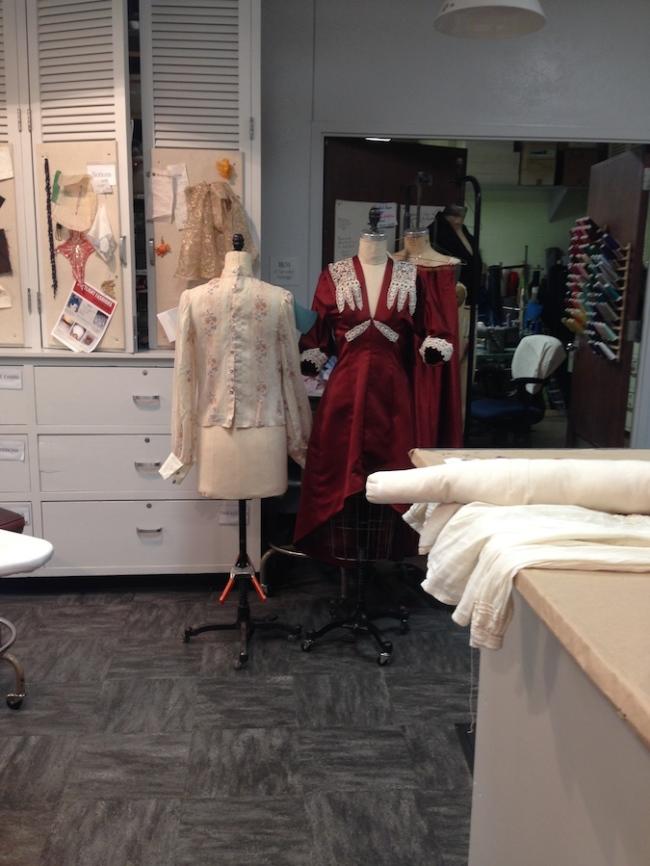 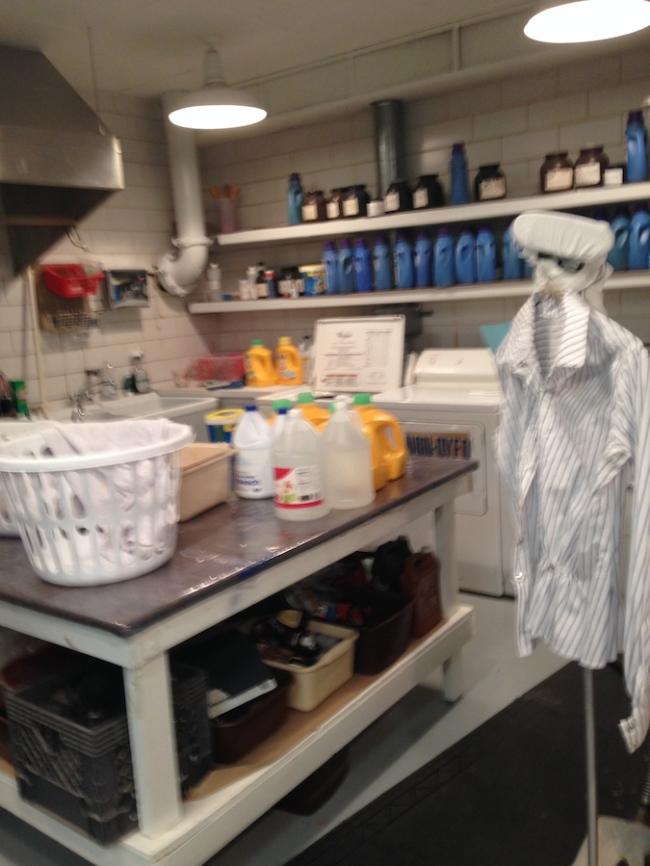 Costume Shop Manager Melissa Panzarello is the one who supervises the area. She is in charge of overseeing the build, or costume production, per show, purchases, costume stock, budgets, allocating funds and managing the workload. Depending on the budget for a show, Panzarello will buy or rent the costumes or have them made.

“About 25 to 50 percent of the costumes are built for the show,” she said. “This process involves either the staff pattern maker and stitcher, professional over hire or students from class.”

This year Meadows needs costumes for 11 shows, and the exact number per show varies. One show could require 200 pieces while another may only need 60. This amount of work could never be completed without two key staff members: Cutter, Draper and Pattern Maker Genie Stallings and First Hand / Stitcher Marika Wynne. It’s a lot of hard work, but the collaborative efforts of the costume shop and the students help this process run smoothly.

Each designer has their own individual approach to their process, but everyone is committed to creating the best pieces possible. Macarthur said that she starts with multiple readings of a script to better understand the characters she is designing for. From there, she meets with the director and other designers. 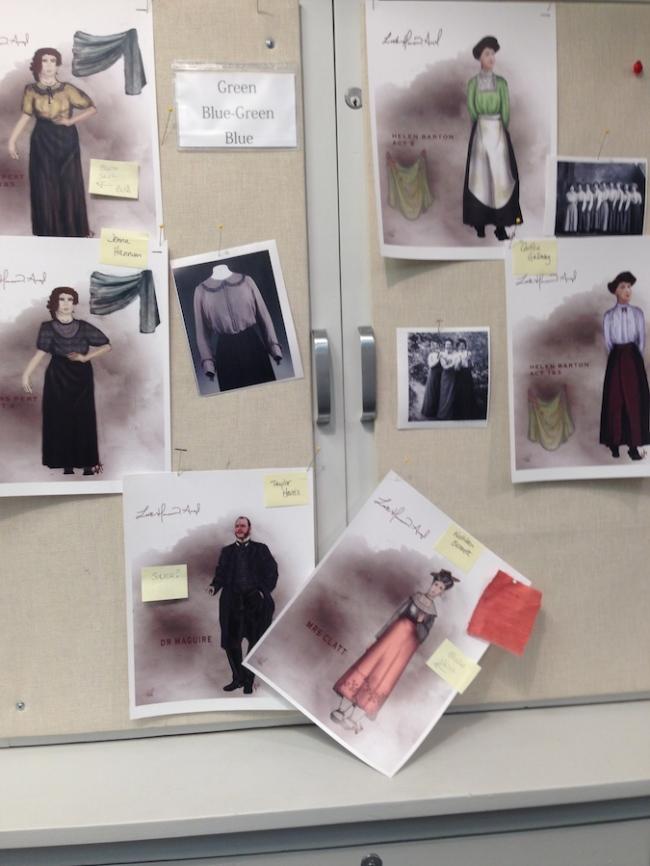 “These meetings are often a discussion on research, collected images and individual perspectives that are melded into one vision,” she said.

After these meetings, the designer begins the sketching process. He or she creates looks that will best suit a character and that will work with the production and actors.

Then, they move to the shop where they assemble the costumes. This involves several steps such as making patterns, sewing the look together and final fittings.

When a student has completed their design or renderings, Stallings begins creating a pattern. This pattern is what will be used to create the physical garment. She takes the design and turns it into a reality.

“I love how excited a young designer becomes when they see that their work has come to life,” said Stallings.

Each show is different, but the process is fairly similar. Stallings finds patterns in stores or online that fit the show. Then she finds all the right measurements and makes sure that the end product will capture the designer’s vision.

When Stallings is finished making the pattern, SMU alumnae Marika Wynne (BFA Dance Performance ‘12) takes over. Her job is to stitch. She cuts out the fabrics based on Stallings’ patterns and stitched those pieces together. Wynne typically uses a sewing machine, but some of the details need to be hand stitched. 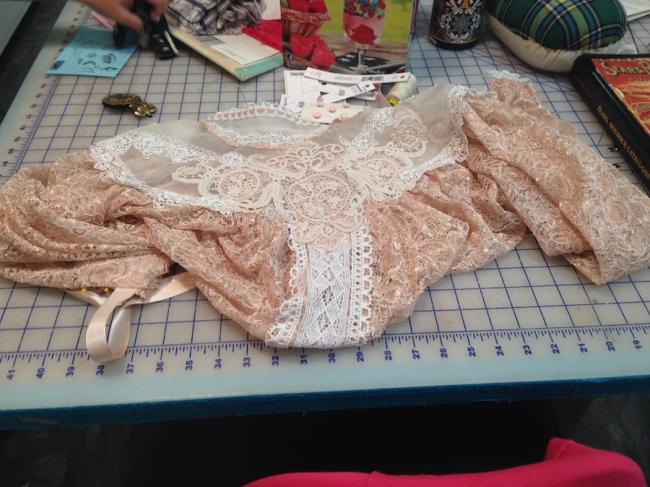 The complexity of the garment varies, but ultimately, the process is about knowing how to piece together fabric. Currently, she is working on pieces for the upcoming play “Look Homeward, Angel.” During the interview, she was working on a jacket that had 13 parts as well as lace detailing. One time at a summer internship, she had a sleeve of a blouse with 48 pieces.

“I like the instant gratification,” she said about the design process. “I like that I’m producing something tangible.”

Costume fittings with actors and designers take place during as well as after the pattern making and stitching. The fitting process is important to many designers because it allows them to make sure their vision is physically working with the actor. This process is where designers get to start creating the physical garment based off of their ideas. They collaborate with actors to create costumes that make a fictional character a reality.

“That is visceral and really breathes life into the characters that for so long have merely been on the page,” said Macarthur about the fitting process.

Fittings are also important for the actors. It’s the first time their trying on these costumes, and this is where they get to feel like their characters.

Her character in “Look Homeward, Angel” is Madame Elizabeth, a stylish, bold and over-the top woman who owns a brothel. Her costumes reflect this character, and she loved that both she and the designer were eager to create a look that would embody this character. 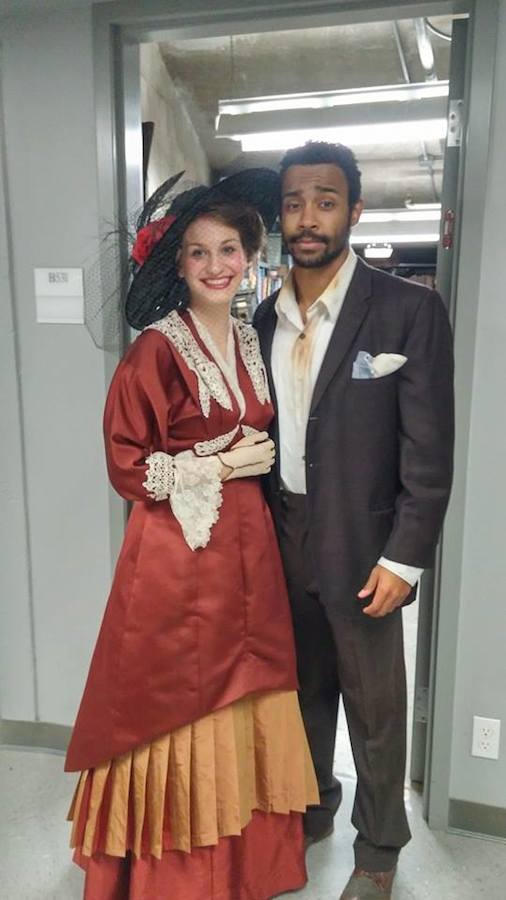 “One of my favorite things in every costume fitting is when the designer picks up a costume piece that they really love, and you immediately love it, too,” said Harris. “That’s when you know that that shirt or hat or jacket is really going to tell the story you want to tell.”

After it’s used, every piece is stored away in the Owen Arts Center basement. The costumes may then be used for Meadows events or loaned out to other universities. Students are not allowed to borrow costumes for their own personal use. The costume shop keeps the costumes to reuse for additional shows. However, at the end of each year, Panzarello checks to see if there are any pieces that can’t be reused. These pieces are either repurposed or donated.