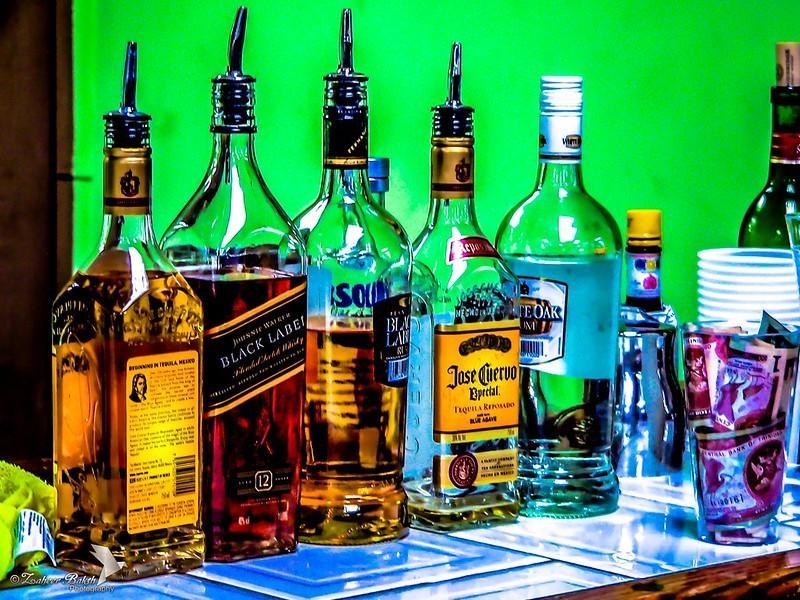 The lights are already dimmed, and the bartenders are lined up like Olympic track stars waiting for the gunshot. With a vodka bottle in one hand and a soda gun in the other, they are ready for the overflow of thirsty college kids.

I recently found out about this “sober-curious” trend, which is just practicing self-awareness and asking, “why am I drinking?”

Is it because I’m more social when I’ve had a few drinks? Am I just joining everyone else? Or maybe I’ve had a long day and feel like I need a drink to take the edge off.

Being sober-curious invites people to have a better understanding of why they are choosing to drink. It often gives people a new perspective on unhealthy alcohol habits.

I wanted to see myself why other people were drinking, so I took to the bars.

In typical college fashion, a pregame is standard before ever thinking about leaving for a night out. Here is where my observation began.

I asked Ella why she decided to drink that night, and she looked at me like I was an alien.

“You can’t go to Homebar sober that’s just not an option,” she said, “It’s so awkward when you’re not drinking and everyone else is.”

After reading many articles about the sober-curious movement, I knew there was one question that would especially be annoying for college students. How is this drink going to impact your well-being?

I ask Ella this question cautiously. She tells me she doesn’t care and does not want to think about that right now.

Honestly, I think if I had asked this to someone blacked out at 3 a.m., the response might have been worse. We part ways, and I am off to continue my investigation elsewhere.

After a pregame, an uber, and a line that is too long for anyone to wait in, I walk into the bar. I make a beeline for the counter full of people desperate to get the bartenders’ attention.

Standing there, with her credit card in her hand, Grace impatiently waves her arm around, trying to be noticed.

She turns to answer my question and tells me, “Sometimes, I just need to feel under the influence of something and not be normal for a second.”

She then proceeds to order two vodka red bulls and hands her card over to the bartender. Her answer was simple yet understandable.

Ruby Warrington had a similar mindset of using alcohol to escape something bigger than herself. She recognized that alcohol was a tool she was using to ease some of the troubles and anxieties in her life.

Though Warrington was never an alcoholic and drank less than the “average” amount, Warrington slowly limited her alcohol intake until finally giving it up altogether.

Her new sober lifestyle helped to alleviate some of the discomforts she was facing earlier in a much healthier and effective way.

This newfound understanding of the presence that alcohol had in her life inspired her to write the book Sober Curious Her novel influenced many, growing into the global trend that it is today.

It’s around 11:30 p.m., and everyone is shoulder to shoulder. The music volume is loud, and the bass vibrates the floor beneath. It’s stuffy and smells like drunk, sweaty college kids.

Trying to order a drink is virtually impossible unless you have the patience of Gandhi. So people start ordering for friends, and the offers to Venmo are echoed across the counter.

I find a much drunker version of Ella in the crowd.

I asked her why she keeps drinking, and she slurs back to me, “cause I’m having so much f***ing fun and don’t want to stop feeling like this.”

She probably knows that she’ll stop feeling like this eventually, and probably feel much worse, but that is not her intention for the moment.

Now it’s after midnight and someone, who at this point had “lights on no one’s home” written all over her face, walks up to me.

I give her the same prompt I’ve given everyone, but her response is by far the most unexpected. She looks me in the eye, swaying in every direction, but her feet are basically stapled to the floor.

Leaning in, almost like to tell me a secret, when suddenly it’s as if a giant gust of 60 m.p.h wind hits her. Before I can even try and reach out to grab her, she is flat on her back. The people around her back up and the whispers start to ring.

Without skipping a beat, she bounces back up and walks straight into the crowd. She did not want her name in this article.

After that night and many others of interviewing drunk people, I came to the conclusion that…

1. No one wants to be asked why they’re drinking when they are already drunk.

2. It’s expected to be drinking when people are out on the weekends and perceived as weird if they are not.

More often than not, when someone does not drink but goes out anyways, everyone who is drinking seems to have the same mission of getting them to drink.

Why is that? Do they genuinely want that person to be drunk, or do they want to feel like they’re not the only ones making the decision to drink?

In our college culture, it is very easy to feel judged, especially when you’re drinking and others around are not. College students may not have the desire or ability to truly look inward and reflect on why they are drinking in the high-pressure environment of a university.

Being sober-curious can be a challenge, but I think it is one worth taking.

It does not mean cutting alcohol out indefinitely and becoming sober. It just means raising the question and allowing yourself to reflect on the deeper meaning of why you are drinking.