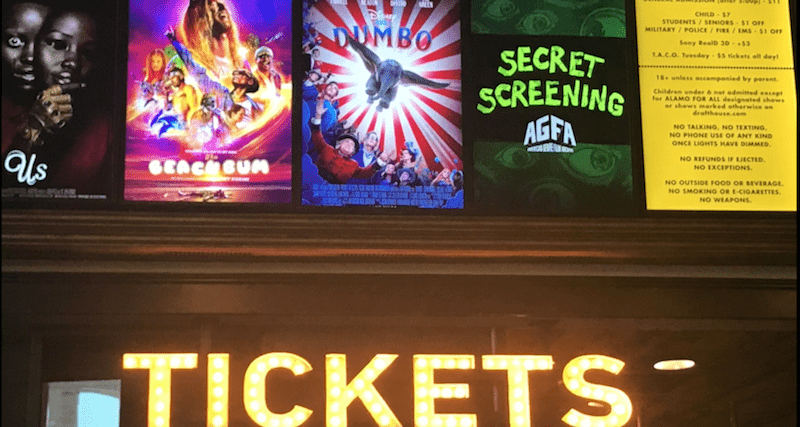 It’s a Monday night and patrons are roaming into Alamo Drafthouse Theater in Richardson. Some are picking up their tickets for the latest Marvel film, others are there for their horror fix. A line of guests sits on the seats that line one side of the lobby. Above them are old horror film posters from decades ago.

The line of moviegoers is diverse. Multiple ages, gender, and styles are reflected as they sit on their phones or talk to each other. An Alamo employee walks out into the lobby and shouts, “now seating for the AGFA secret screening!” The guests get up and start to mill out of the lobby, headed to theater 6, the largest screen at the location.

When the Alamo Drafthouse theater chain came to the DFW area, James Wallace, the area event programmer, wanted to bring a new event that was special to the Dallas location. After a trip to Austin and seeing the stacks of American Genre Film Archive reels, Wallace wanted to take advantage of those films. He remembers seeing the boxes with the names scrawled on them, “punk rock” style. The AGFA is an Austin-based non-profit that aims to preserve the cinematic legacy through restorations and distributions.

Wallace felt like he had found a treasure trove of cinema history. The idea for the DFW monthly series stemmed from both the series at the Austin locations and Wallace’s love of the community that cinema provides. For him, it was events that could inspire a new passion for films long forgotten.

The AGFA secret screening runs on the first Monday night of every month. The event happens in the same theater at the same location, the Richardson Alamo situated off of Central and Belt Line Rd. Guests buy their tickets in advance but are not aware of what film they are seeing that night until the lights go down and Wallace walks out to announce it.

The decision by Wallace to keep it a secret screening was very purposeful, “There’s an element about going into these movies with no exception, it runs with not knowing what to expect.” For him, the movies chosen are so bonkers that they always deliver with the audience. The films are often B-films, ones that the majority of guests would have never seen, if not heard of before.

The AGFA screenings are just another way Alamo Drafthouse is seeking to bring cinema-going from the past into the future. The cinema chain is known for populating their schedules with showings of older or lesser-known films. They are also famous for their interactive movie parties, sing-alongs and most importantly, their strict no-talk/no-text policy.

For Wallace, the secret screenings are a highlight of his career at Alamo DFW. The series has been one of his greatest achievements and he is delighted to see the community formed from his idea.

The AGFA guests are seated, ordering their food and drinks from the waiters. A projector runs old cartoons and advertisements. There is a quiet conversation noise that echoes through the dim-lit theater. As the time gets nearer, more patrons settle into their spots, waiting to be surprised by their next favorite film.