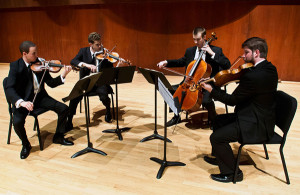 The Meadows School of the Arts hosted the Altius Quartet at Caruth Auditorium on Saturday.

Cellist Zachary Reaves played host this evening, inviting people to doze off during the night’s opener of Philip Glass.

The 120 people in the audience kept eyes and ears on the musicians the entire night.

Viewers visibly tensed up to hold applause between movements.

John Adams, a law firm librarian, caught wind of the quartet through his Meadows newsletter subscription.

“They’re fantastic,” Adams said. “Their unity is amazing, like it’s one instrument.”

Impressed by their performance, the pianist made them the resident string quartet.

“These guys are just incredible,” says Mientka, who’s daughter Stephanie dates Altius violist Andrew Krimm. “They’re on their way up, for sure.”

The Altius Quartet formed in 2011 to perform with the Bridge the Gap Chamber Players, also becoming the group’s resident string quartet.

The group has toured extensively across the country, and played with numerous musicians, including Meadows Professor of Cello Andres Diaz.

The group is also accomplished, winning first prize in the Fischoff National Chamber Music Competition in 2013.

This win caught the attention of Samuel Holland, Director of the Division of Music
at Meadows.

Holland reached out to the quartet, offering them the first graduate residency at Meadows for a string quartet.

Reaves said the group plans to continue touring while mentoring child musicians in the DFW area.

The Altius Quartet will play another recital at Meadows on Feb. 15, 2014.