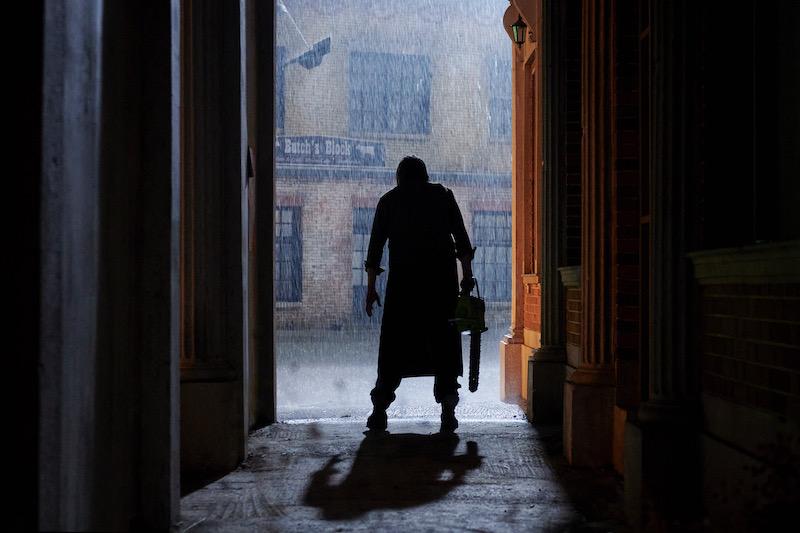 Cooper created the first “Texas Chainsaw Massacre” amid a backdrop of a filthy, rural Texas in the 70s. Following the Vietnam War, TCM (1974) grips its viewers with its gritty imagery and nauseatingly compelling cinematography. The psychological slasher birthed a franchise that would go on to inspire lackluster sequels for the next four decades.

Netflix’s version is no exception to the pattern.

“TCM” (2022) reintroduces Leatherface and the remote town of Harlow to the age of smartphones and cancel culture. It centers around idealistic Austinites, their plan to gentrify the old Harlow, Texas into a sanctuary for modern-day yuppies, and their Tesla.

“It’s just kind of like a clash between big cities and rural communities, which is kind of happening all over the country – a mass exodus of urbanites moving to small-town America,” Garcia said. “The film also addresses a lot of other issues as a part of the complex world we live in – much like the way the 1974 original was also doing.”

The appeal of 1974 TCM is that it addresses issues of class and wealth painfully realistically; the world feels lived in, and the characters (for all their one-dimensionality) aren’t performing or expositing for an audience.

This is starkly different from the first few minutes of TCM 2022. The first Texan we meet, a gas station clerk owner with an exaggerated Southern drawl, mutters the word “Gentri-fuckers,” upon meeting our main characters, Melody and Lila. I half expected him to tip his hat, look at the camera, and say: “We don’t like city people ‘round these parts.”

“Growing up in Texas, I was always aware of how important the film was,” Garcia said. “There was definitely some pressure to honor the original; I watched the original right before I made this film and just sort of kind of let its spirit and feeling kind of flow through me and back out onto the screen for the 2022 film.”

Frankly, I don’t believe him.

The next Harlow resident we meet in the movie is laughably stereotypical. Richter is a gun-wielding, authority-hating xenophobe with a truck spitting out the blackest exhaust I’ve ever seen in my natural life. The words, “I’m a Texan, I don’t like people telling me what to do,” are spoken next to his conveniently placed machine rifle.

This serves as an opportunity for the viewer to meet Lila, the younger sister of Melody (one of the idealistic urbanites) and also a survivor of a high school shooting. While Elise Fisher does a good enough job with this character, her presence demonstrates another problem with TCM 2022: it tries to do too much.

“A lot of my inspiration came from trying to do justice to the violence of Lila’s story,” Fisher said. “I think with her having been a survivor of a school shooting, that’s something that I wanted to give nuance. I did a lot of research and how people deal with trauma, and that helped me craft her into a dimensional person.”

The grave tone in Lila’s portrayal is jarring against the several sequences in the movie played for laughs (like the caricature-like scenes with Richter). Garcia’s attempt to introduce the dangers of social media doesn’t help this tonal issue.

“There’s this moment where Leatherface walks onto this party bus, and it’s blue lights, rap music, a bunch of hipsters wearing clothes he’s never seen, and they’re holding up these like rectangular devices and pointing at him,” Garcia said. “I just really wanted to play up like the culture clash there and introduce Leatherface to contemporary time. I did feel like there should be this moment of suspense, but also, I mean, I played it for levity. I think it’s a kind of a funny commentary on the way we are as a culture, sort of addicted to cell phones.”

Moreover, Leatherface – the franchise’s iconic chainsaw murderer – also falls victim to gross misportrayal, leaving the viewer wondering if this is even the same Leatherface from 1974.

“I talked with Kim Henkel, the writer of the original, soon after I was hired on to this project,” Garcia said. “One piece of advice he gave me was to make sure not to humanize Leatherface too much. There’s a tendency to want to humanize the villain in a way and see him in a different light.”

Leatherface is significantly humanized in this movie, suffering the on-screen loss of his mother and clutching and crying into her clothes post-mortem.

“He’s a terrible, terrible person, obviously, but he has a very unfortunate childhood and upbringing; so, we can’t fully blame him for his actions,” Garcia said. “He’s, it’s kind of an allegory for like, the worst parts of and the most violent parts of humankind, so I didn’t want to humanize him too – make him too sympathetic. But naturally, that happens for these kinds of characters anyway.”

TCM (1974) works because of the mystery surrounding Leatherface and the nature of the murders themselves. Garcia’s 2022 version suffers for this reason; it strips the story from suspense and fails from over-explanation and unnecessary dialogue.

“Fans are very precious about their classic films and very skeptical about new takes on things,” Garcia said. “I wanted to live up to their expectations and hopefully exceed them.”

Rotten Tomatoes currently shows the movie has a 37% rating with audiences. Whether or not one will enjoy TCM (2022) is likely dependent on how bored they are and if they’ve already watched everything on Netflix.

If you’re looking for some mindless slasher and don’t mind irritating dialogue, check out TCM (2022). Otherwise, I’d recommend just rewatching the original if you’re having a hankering for what makes TCM so uniquely remarkable.