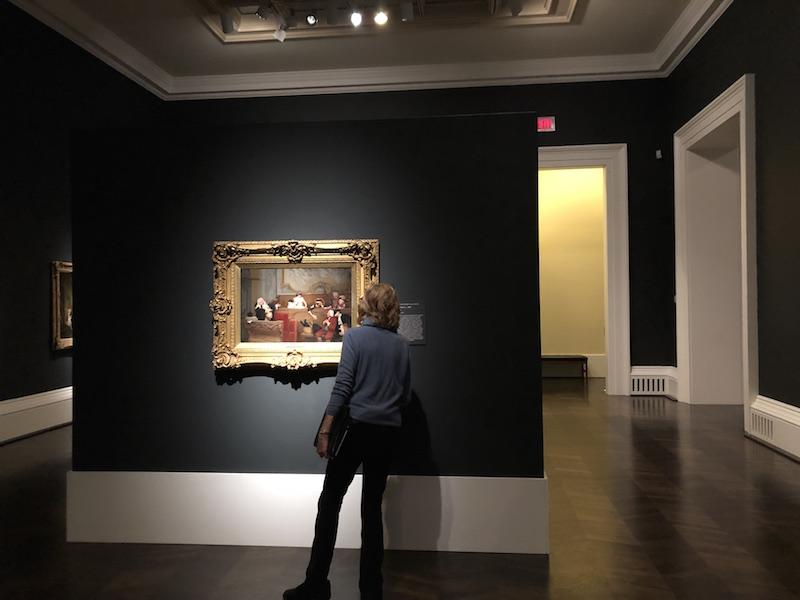 Directory of Education Scott Winterrowd led the talk. He examined the painting “Trial of Pierrot,” which is part of the “Fortuny: Friends and Followers” exhibit on the second floor of the Meadows Museum. Featuring works by some of the most successful 18th and 19th-century European artists, this exhibit is unique and notable to Meadows.

“Only in specified collections that have been built out of these late 19th-century collectors do you wind up seeing these objects,” Winterrowd said.

Although the spotlight is on Fortuny in this exhibit, many artists of his European circle are on display – their work predates Impressionism which, according to Winterrowd, might be a reason their names aren’t very familiar.

“All of the painters in here that you see are, to some degree, a lost generation of painters that have been forgotten because of impressionism. And when impressionism came on, all of this just disappeared,” Winterrowd said. “These guys were at the top of their game when the Impressionists were on the rise. These painters like Meissonier and Fortuny were the highest paid painters of their day.”

Some of the paintings in the “Fortuny: Friends and Followers” exhibit have been studied and collected by the most famous 20th-century artists like Vincent van Gogh and Pablo Picasso. These works sold for astronomical amounts of money at their time.

“When Fortuny sold ‘The Vicarage,’ a painting in Barcelona, it sold for 70,000 francs in the 1870s. Meissonier even eclipses that with another painting that he creates, for 75,000. They’re painting these tiny little paintings and people are paying a fortune for them,” Winterrowd said.

This exhibit is monumental for the Meadows Museum, considering these pieces are extremely rare and worth a fortune.

“It’s important to know our past. Whether it’s art historical, or historical or social history or political history,” said art dealer Carolyn Volt. “It’s a great entrée for people to get interested in history because we’re such a visual culture. It’s a good jumping off spot.”

The piece depicted a court scene with seven men and one woman who was highlighted and the focal point of the piece. This provoked discussion of feminism and sexuality in 19th-century France, while the men’s costumes rose questions about social power and wealth.

The attendees periodically chimed into the conversation, stating interesting opinions and historical facts.

Winterrowd discussed the details of the work, though it wasn’t until the spectators ventured up close to the painting that they were able to appreciate them.

“There is much more to a painting than what first meets the eye. Especially this piece and this collection in general, after staring at the piece for a while you start to notice certain details and messages that all come together to tell a story,” said SMU philosophy major James Dannenbaum.