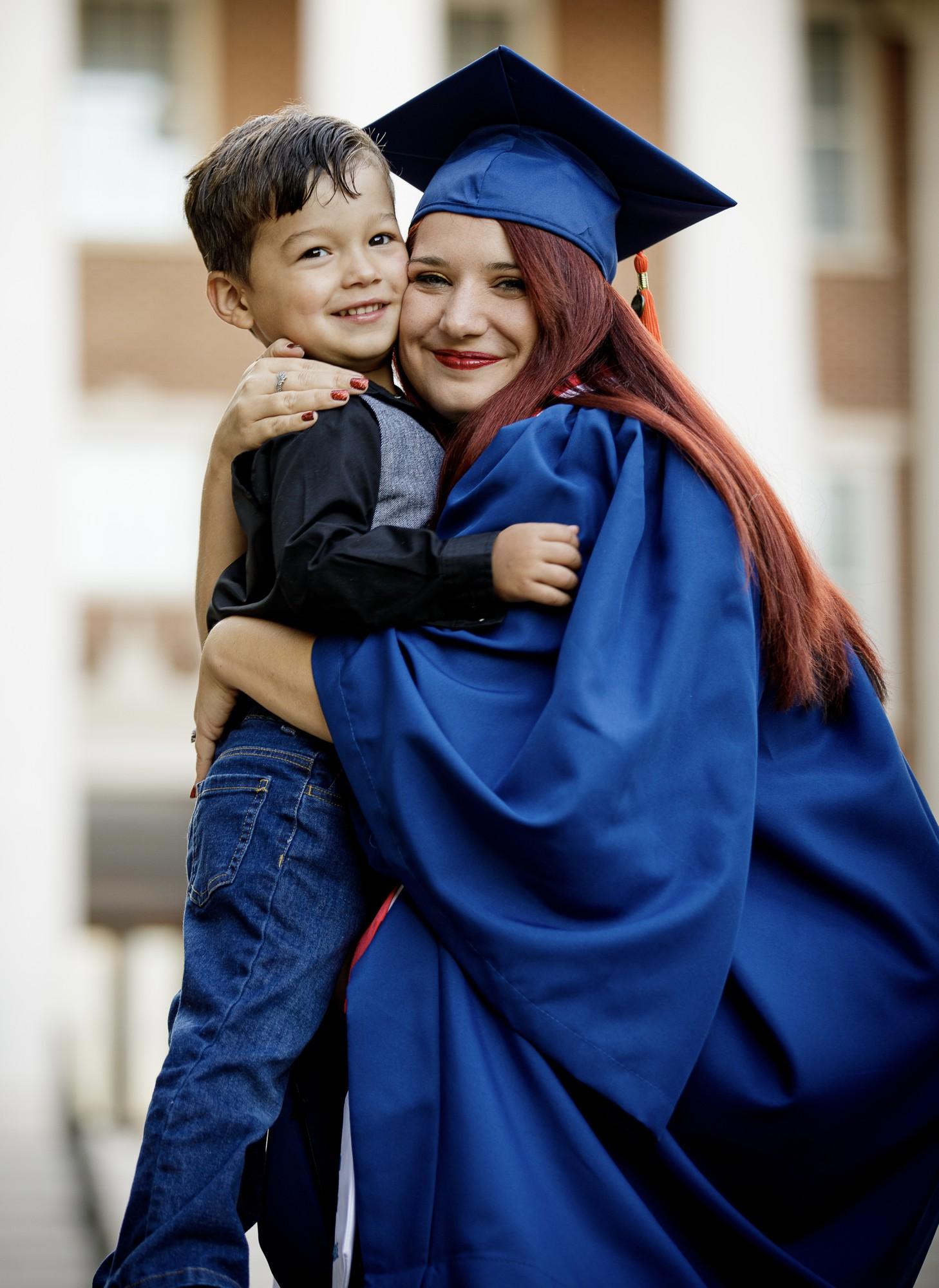 Seventy miles from SMU, Senior Ashley Terrill hits her alarm clock at 5:30 a.m. and rolls out of bed. She quietly gets up and gets dressed, careful not to wake up her three year-old-son, Thomas. Then, she feeds her pets, gathers her things, and makes Thomas’ lunch. When everything is ready, she wakes Thomas up and gets him dressed. At 6 a.m., she leaves the house and takes him to daycare.

Then, through the traffic on Interstate 30, she makes her almost two-hour commute to SMU, making it just in time for her 8 a.m. class.

Every Tuesday and Thursday, this past semester, Terrill repeated this ordeal. She managed to stack up all her classes for these two days, in class from 8 a.m. to 3:30 p.m., before she would head out by 4:30 p.m. in time to pick up Thomas from daycare at 6 p.m.

“I pick up my son and we go home,” she said. “He watches Paw Patrol or Blaze and then we do bed-time and watch one more episode and go to sleep—that’s my day.”

Now, Terrill stands days away from graduating with a Bachelor of Science in Mechanical Engineering. She stands tall, resilient, proud, and with Thomas by her side, looking back at how far she has come.

In her first semester at SMU, Terrill would get to school, make her way through campus, and find the nearest bathroom. That is where she would pump her first batch of breast milk. Then, she would pick herself up and go to two classes. After class, Terrill would go back to the restroom and pump more milk. Next, Terrill would eat lunch and go to class again. She would then return home, exhausted and with lowered supply, to feed Thomas.

Between her commute, starting a new school, and balancing her academics and social life— Terrill felt as though she was missing big milestones in Thomas’ life. Then, COVID hit, and the pandemic, as grim as it was, brought a little bit of light down for this single mother and her child. It gave her the chance to witness Thomas’s first steps.

Terrill is a unique prospect on the SMU campus. For single mothers nationwide, only 24 percent of them aged 25 and older have college degrees, according to the Institute for Women’s Policy Research. And for women in engineering, they only make up 15 percent of engineering occupations, per the 2019 U.S. Census.

Terrill first began her collegiate career in 2014 at Del Mar Community College in Corpus Christi, where she received her associates degree. After this, she transferred to Texas A&M at Corpus Christi. Her first semester there is where she got pregnant.

“While in Corpus, I met my son’s Dad, we were together for five years before we split up. There was a lot of toxicity in the relationship,” she said. “And having Thomas actually is what gave me the strength to get out of it.”

Originally, Terrill didn’t want kids, “I was selfish, I didn’t want to make all the sacrifices you have to make as a parent,” she said. Despite this, Thomas was her anchor and motivation in tough times. With the odds stacked up against her, she prevailed. With a child in her arms, Terrill was ready to fight hard for the life she wanted for her and her son. And she did. After giving birth to Thomas in Oklahoma, because of financial support offered to registered Choctaw Native Americans, Terrill moved back to Texas and moved in with her parents. Then, she began her studies at SMU.

In spring of 2022, Terrill had to take a night class because of course selection. For most students, a night class means missing social outings. For Terrill, it means not getting to tuck her son in and say goodnight.

“My mom had to pick him up and put him to bed on those days,” she said. “And it really made me sad because I have lots of long nights that I spend just trying to complete homework assignments and I try very hard to spend quality time with him since he doesn’t get as much quality time during the week.”

The tough moments Terrill faces throughout her journey as a full-time student and single mother weigh heavy on her heart. School is important she says, but Thomas takes priority. Terrill has the dual responsibility as a mom and student, but she also assumes the role of both parents in Thomas’ life. This requires her continual sacrifice.

“Sometimes he’ll be like, ‘I don’t want to go to daycare’ and I’m like ‘I know baby. I’m sorry. You have to go to daycare because Mama’s gotta go to school,’” Terrill said. “I wish that I could tell him that after I’m done with school it could change but then that’s when [my] career starts. And that’s just going to be his life. It will be forever 6 a.m. to 6 p.m. and daycare. But it is so heartbreaking at times.”

With the sacrifice, Terrill says she is lucky enough to have familial support. Living with her parents opened the door for wholesome interactions with Thomas and his grandparents. With his grandmother, Thomas loves to do crafts. With his grandfather, he has become a perfectionist. He loves to sweep and mop the floors; he even has his own miniscule cordless vacuum that he uses around their house. Terrill values immensely the role of family and also the role of faith. She believes that fate brought her to where she is today.

During every long commute Terrill would listen to The Porch, a young adults ministry in Dallas, playing their sermons. She believes that God placed her far away from SMU to lead her down a journey of faith. After her routine listening, she says she was driven to read the Bible more.

“It got to a point where I remember last spring break, I didn’t have that week of driving, of, you know, listening every day. And at one point, I was really stressed, and my first thought was, I need to go read my Bible,” she said. “Which was weird because I was like ‘man, two years ago, never would have thought that,’ that would have been the last thing on my mind. I’ve just found that it’s really given me a lot of peace and a lot of contentment and joy and patience and days that I don’t listen to it I find are more difficult.”

Terrill fulfils her roles as a mom, student, Christian, daughter but also as a friend. Graduate students Lauren Horton and Abigail Hays both see a wise, brilliant individual within Terrill. They describe her as an inspiration, radiating with confidence and honesty.

“Ashley inspires me every day. She actively pursues things she wants to learn more about, she seeks help when she needs it, she’s confident and always willing to share a laugh,” Horton said. “She will always give me an honest answer and I can’t tell you how much I appreciate that.”

The traits that Horton and Hays see in Terrill, they also see reflected in her son. From 3–D printing toys at the Deason Innovation Gym for Thomas, Terrill instills a curiosity and kindness in her son that is recognizable by all individuals in her life. Most of all, resilience is noticed within Ashley Terrill. For her, that is a trait that even she sees within herself. As she entered college in 2014, with no desire to have children, the child she had ended up as the motivation for every aspect of her life.

“Your life doesn’t end whenever you’re a single mom,” Terrill says. “It’s difficult. But not impossible.”