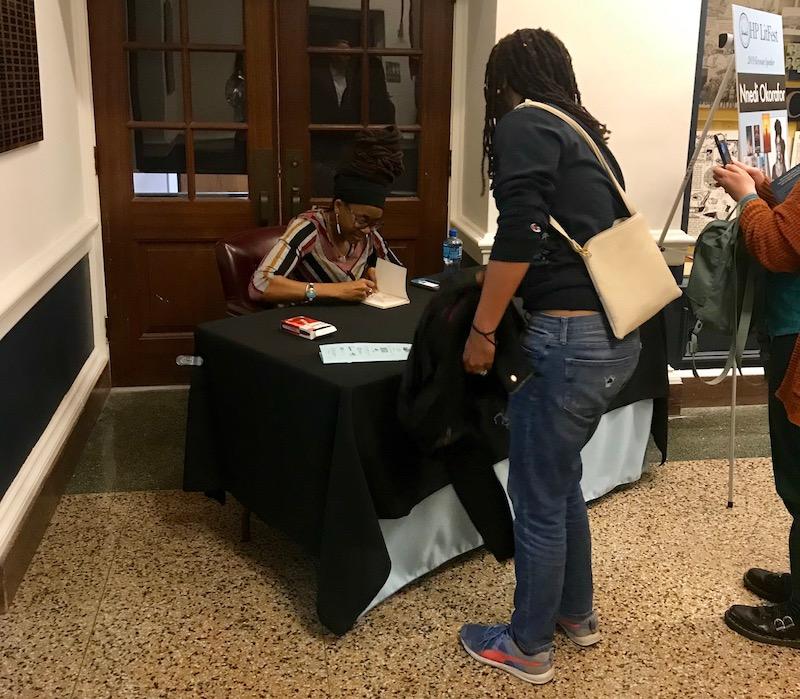 Dr. Nnedi Okorafor, the daughter of two Nigerian immigrants, is the author of Marvel Comics’ Black Panther: Long Live the King as well as Shuri, a comic book series about Black Panther’s little sister. Her breakout novel Who Fears Death is currently in development as a TV series for HBO.

In addition to bringing in speakers like Dr. Okarafor, Highland Park Literary Festival has offered over 1000 workshops to Highland Park students since it began in 1995. The festival also features a student-run open mic night, writing contests and awards, book clubs, and more. Jill Tananbaum, the 2019 HP LitFest Co-Chair, spoke about the event’s far-reaching impacts.

“We are seeing the dividends of these prior LitFests in our students’ accomplishments,” she said.

The audience was a mixed group, ranging from young children clutching their copies of the Black Panther comics to adults from the surrounding community.

Dr. Okorafor began with the story of her slow path to becoming a writer.

“In Nigerian families, there are four occupations: doctor, lawyer, engineer and failure,” she said. The audience laughed. “For eight years, I was writing novel after novel with no intention of getting published. Those eight years allowed me to find my voice.”

Dr. Okorafor also spoke about the hardships she has faced and how they have influenced her writing. A spinal surgery she received at age 19 left her paralyzed from the waist down.

Once she began to regain the ability to walk, she returned to school and changed her major from pre-medicine to creative writing.

“Like a child in the forest following a fairy, I followed those stories,” Dr. Okorafor said.

Central to Dr. Okorafor’s writing are the experiences she has had visiting Nigeria with her parents. Although her works can be described as fantasy and science fiction, she has also come to define them with her terms.

“The funny thing with Marvel is I have complete freedom with the story, but they give you certain parameters. I had to write three issues—Spiderman, X-Men and Avengers—but one story. I’ve always liked a good challenge,” she said.

Following Dr. Okorafor’s keynote address, guests gathered for the book signing outside of the auditorium.

“I loved her. She is incorporating things in her writing that are real and that her mother has told her about her Nigerian history,” said Michelle Micklus, an audience member. “She is just oozing with all kinds of ideas.”