The old clock ticks loudly as it strikes 10:50 a.m. A door flies open and the quiet hall is flooded with footsteps and the animated conversations of SMU theatre students. They make their way down the hallway to the green room, a lounge area for students, carrying backpacks, water bottles and swords.

It’s not a popular accessory around SMU’s campus, but in the Meadows School of the Arts, almost anything is possible.

The herd of students is lead by a small, serious looking man. He wears baggy sweatpants cut off at the ankles, a loose T-shirt and black sneakers. His wispy, gray hair lies across his face and trails into a short, white beard. The students huddle around him as they walk, talking about the repertory they’re rehearsing, their classes and his previous lesson.

Bill Lengfelder is a movement professor in the SMU Department of Theatre. One of his students, Parker Gray, describes him as “erratic.”

“He’s incredibly knowledgeable, flexible in how he teaches, and deeply passionate about his work,” alumnus Jeff Colangelo said.

To those who don’t take his classes, he is a bit of a mystery. When not teaching, students frequently see him outside of Meadows practicing tai chi by the small fountain behind the school. His class piques curiosity as well. Sitting outside of his classroom, one will hear humming that evolves into yelling, metal clanging together, and occasional breathing exercises. It’s definitely not the typical sounds heard outside of a lecture hall.

“Over the course of two semesters junior year, we learn rapier, dagger, rapier and dagger, double sword and stick. And we learn dances for each one of them as well as a choreographed fight within each form,” Gray said.

Miller reflected on how the class helped his performance in Macbeth this semester.

“My character, Banquo, is killed so it was nice to know how to fight and die well,” Miller said with a serious expression.

Banquo, who is Macbeth’s right hand man, has several fight scenes in the play and ends up being killed by three assassins. It is not something most people need on their resume, but as an actor, knowledge in stage combat and movement can aid a career.

“For any show that doesn’t have fighting, you might have to take a fall or faint or do something physically taxing,” Gray said. “There are safe ways that we learn in regards to those, in order not to hurt ourselves so we can repeat them over a long run and remain healthy.”

Colangelo, a local artist and 2012 SMU graduate, is a prime example of how movement classes benefit artists. Upon graduating, Colangelo started his own theatre company, PrismCo. He and several other local artists and SMU students and alumni create full-length movement-based shows that tell a dramatic story without using words. PrismCo has been critically acclaimed in Dallas and has accumulated a very dedicated audience. His movement training at SMU really allowed him to tap into a different side of his acting and helped him create a new kind of theatre that hasn’t been explored much.

“Bill’s class was huge in making my career as a fight choreographer and movement director for a number of obvious reasons,” Colangelo said. “But most importantly, I think it was because he taught me that perfection is not necessary in creating movement art, and that all movement can be artistically beautiful or compelling as long as they are committed and story driven.”

In addition to learning fight choreography, students gain knowledge of their own bodies. They create their own kung fu animal styles, which is the way humans move through space. Miller claimed that he was a lion, and Gray said he was a mix between a crane and a mantis.

It’s not a typical class and Lengfelder isn’t your typical professor. Students form strong relationships with Gray after three years of training under him.

“Bill and I have a really funny relationship; where he acts like he hates me […] and I like to play his game and be the victim,” Gray said. “There are just numerous times a class where we banter back and forth.”

In a school dominated by business, engineering and liberal arts majors, the theatre majors seem to be having all the fun learning sword dances, fight sequences and finding their inner chi. This course provides theatre students with the resources and knowledge to help them succeed after graduation.

Posted on December 3rd, 2015 by Daily Campus Staff
ShareTweetShare on Google+Pin on PinterestSend with WhatsApp
6 recommended

Meadows at the Winspear 2019

SMU Meadows ‘As You Like It,’ the marriage of incredible wit and romance 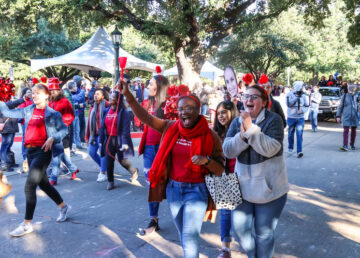 The push for a more gender-neutral Homecoming results in progress. END_OF_DOCUMENT_TOKEN_TO_BE_REPLACED

Looks of failure and dragging feet leave the Hyatt Regency in downtown Dallas as Democrats prepare for the assumed loss of the White House. END_OF_DOCUMENT_TOKEN_TO_BE_REPLACED