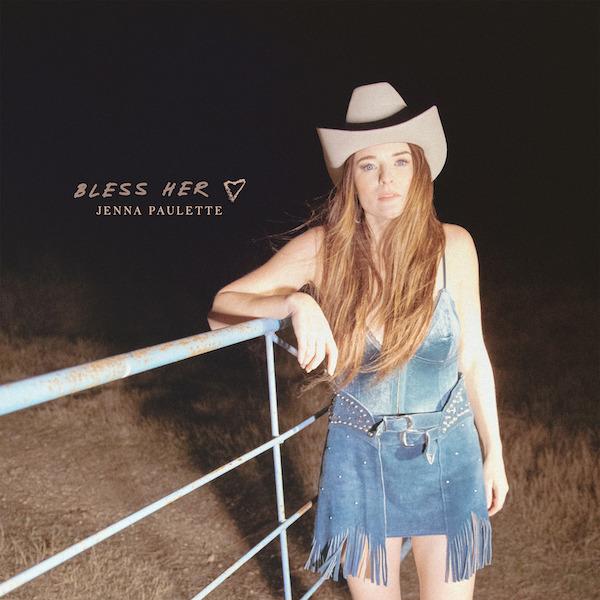 Country Artist Jenna Paulette’s newest single “Bless Her Heart” just released, and we are loving it.

Growing up around cowboys and working on her grandfather’s ranch in Texas, the high-spirited “Modern Cowgirl” writes her own music on stories that matter most to her.

“I always knew I wanted to do this for a living and am lucky enough to be able to,” said Paulette.

“Bless Her Heart” released on Oct. 22, and the catchy country song emphasizes the foreshadowing of a heart waiting to be broken. Paulette said that the inspiration behind the song came from 90’s country with a hint of 2020s music. She wanted the song to tell the story itself and said that “Bless Her Heart” reminds her of Shania Twain and The Dixie Chicks who she looks up to. Paulette shared the inspiration behind her newest single and how she makes songwriting seem easy in a press conference with SMU’s The Daily Campus.

“I was actually on a songwriting trip,” Paulette said. “It’s really common in Nashville for songwriters and artist to go somewhere be it like Arizona, or the beach or somewhere cool, and just kind of stow away and write songs for a few days…We were writing down in Florida and I had my buddies Jeb Gibson, Will Bundy and Heather Morgan…We toyed around with the idea for about an hour or so.”

After asking Paulette how she felt about her newest single being released she said, “I think I’m just nervous and excited. You never know what the response is going to be unless you leak it on TikTok. I always get nervous and excited about a release and I can never sleep the night before. I believe in this song and I believe in the video we got coming with it too… more exciting than anything, but a little nervous there.”

Paulette sees “Bless Her Heart” as “a story telling song [that] kind of is reminiscent” to her. As the artist lets her music tell stories on its own, she finds her biggest influences being George Strait, Shania Twain, The Dixie Chicks, and Miranda Lambert.

“George represented all the men I grew up admiring. I grew up in a cow-calf operation family, so ranching, cowboys, all of those things were very real to me, so seeing somebody like George resonate with so many people in such a real way was so inspiring to me. It made me feel like I had a place in Country Music. The Dixie Chicks sang the coolest, best songs ever. They cut great songs. They were amazing performers. They had so many songs that were story songs that were easy to perform on stage. They were just high energy…Shania Twain–the same thing…She has a lot of energy that led to something kind of easy to perform in a show setting, because they added so much energy to the live set.”

Paulette gives advice to students wanting to break into the music industry. As she learned from her mentor, Ashley Gorley, Paulette learned and shared that “you need to know who you are, what you want to say, and how you are going to say it” in order to be successful in the industry.

From breaking hearts in a relationship gone cold to heart breaks and storytelling that Paulette takes on from her biggest inspirations, she hopes that her fans can connect to her as an artist and see her music as a story.

“I want them to feel connected to their roots and to the way of life that I represent and love, because I think that way of life is just such a beautiful picture of how it can be.”