“The purpose is to build community pride and get students excited about living on campus and continuing to live on campus and to have fun before the summer gets here,” Maya Reeves, the McElvaney Residential Commons Director said.

Since students are just two weeks away from the end of the year, Reeves said it’s important to help students de-stress before their final exams.

“I think because we have so many events that happen in April it helps people stay positive and smiling going into finals,” Reeves said.

Sofia Pullen, McElvaney commons council president, said that her involvement in planning and attending the event helped her take her mind off the stress of classes, and onto the fun of the community event.

“I think our entire council is involved with this event and I think the food and relaxing camp activities will help students de-stress,” Pullen said.

“We are following the initiatives we’ve seen on campus to bring fun activities to students who live on campus and bringing them a form of happiness,” Pullen said.

The McElvaney event included free t-shirts, s’mores, a drone, and a 65-foot waterslide, which was the main feature of the event. The commons council and commons director initially began discussion about the event early in the semester. 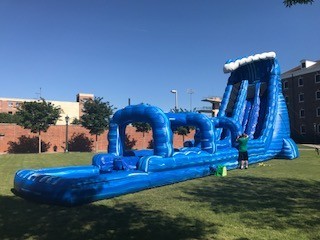 “The waterslide was my idea, I think it’s different and I haven’t seen any water slides across campus at other events yet so I think it’ll help up stand out,” Pullen said.

Kaelon Money, a freshman management science major said he was most excited for the free camp-themed food of hot dogs and hamburgers.

“I’m hoping to have fun and relax, and I’m most excited about the food,” Money said.

For other students, the idea of unity on campus was the best part about the event. Arthur Troy, a junior marketing major said it is exciting to see representation from every residential commons at the event, and that he felt it really brought people together.

“I think the end of the year celebrations are another amenity to tack on to the benefits of living on campus,” Troy said. “They can be a remedy to finals, and I think anything that brings people together on a Thursday that isn’t Homebar is a nice thing to do.”