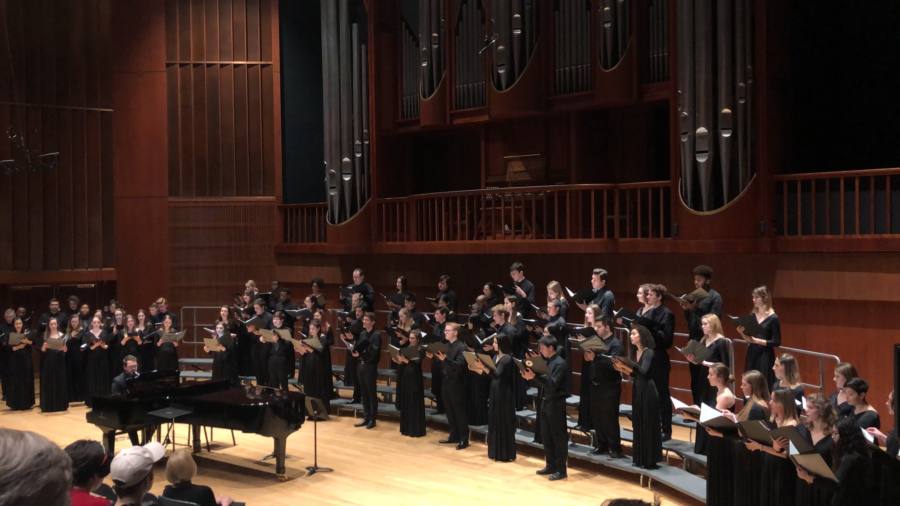 Valentine’s Day may be behind us, but the Meadows choirs joined forces at Caruth Auditorium on Sunday, March 3 to sing about love in all its forms. The Meadows Chorale, Diva Dolce, and Meadows Chamber Singers overcame languages and illness to perform their “How We Love” recital.

Julia Durbin, a senior member of the Meadows Chamber Singers, said seasonal sickness was a major difficulty for the choir.

“Everybody’s getting sick right now,” Durbin said. “There were, I think, two people who weren’t on stage because they were sick. And in a small choir, especially the one I’m in, that’s really difficult because there are [sic] a small amount of people already.”

Those who were well enough to perform had to sing in four languages, not including English, to convey messages of romantic, familial, and global love.

“The Spanish pieces were fairly hard,” senior choir member Jackie Malish said. “Since Spanish is a fairly common spoken language, especially here in Texas, we wanted to make sure everything was sound and correct.”

“I really love the two Spanish songs, because we don’t really sing in Spanish much,” Durbin said. “My mom speaks Spanish. She grew up in Mexico. And so, it’s really fun for me to be able to sing in Spanish.”

“My mom speaks Spanish. She grew up in Mexico. And so, it’s really fun for me to be able to sing in Spanish.”

The choirs also performed an Italian song, an Irish lullaby, and a Norwegian lullaby. The Norwegian tune had a haunting mood, despite being a traditional children’s lullaby. The notes seemed to linger in the air, and the audience was completely silent throughout the piece.

“It’s always a little sort of spooky,” Dr. Huffman said. “Real ethereal. This is a lullaby, but it’s in a minor key, and it just sounds—it really sounds kind of creepy. But it’s quite beautiful.”

The Meadows choirs overcame their difficulties with languages and illness to come together for the final song, “How We Love,” which the recital is named after. The piece featured a soloist, Zach Light-Wells, who also played the piano.

“It’s always nice to see one of your peers perform in a way that you don’t normally get to see them perform,” Malish said. “We hear him in Choir, but for him to be able to kind of share his talents with piano and vocal was really nice.”

Dr. Huffman said she hoped the final song would make the audience feel a connection with the performers.

“You want the audience to feel like they are part of the experience,” Dr. Huffman said. “It’s hard to do.”

“You want the audience to feel like they are part of the experience.”

Malish said she believed audiences were able to take away the core theme of love by the end of the show.

“I think the theme is—really what comes from it—is that there’s different ways to love people,” Malish said. “For me, and I think for a lot of people, that can be through music.”