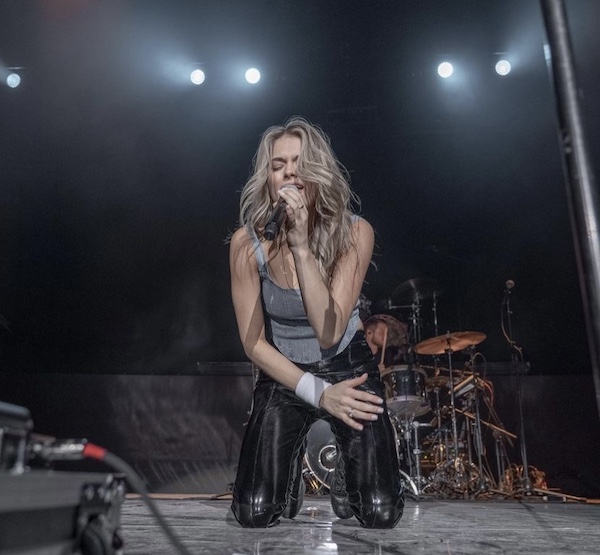 Excitement filled The Pavillion at Toyota Music Factory in Dallas, Texas as fans scurried over to see their favorite alt-pop band, LANY, after a yearlong wait to see the band perform live for their ‘Gg Bb Xx’ tour. The band brought out emerging artist-songwriter Alana Springsteen, and Asian-American singer, songwriter, producer and multi-instrumentalist Keshi, to open up for their show.

The lights dimmed down to an orange and blue color as the first-opener, Alana Springsteen, walked out on stage for her first song “California” from her brand-new album, “History of Breaking Up (Part One).” Pumping up the crowd with her energetic performance, Springsteen interacted with the audience and assured that they were ready for LANY.

The music ricocheted from every corner of the theater as fans in the pit pushed their way up into the front of the barricades just to see Springsteen perform. Soon after her first song, “California” played from her setlist. Late-comers ran up the stairs to hear Springsteen perform.

Springsteen proceeded to excite and interact with the crowd. While performing her 2020 single “Think About You” featuring Filmore, the audience swayed their arms in the air and flashed their phone lights to the rhythm of the music.

“I GOTCHU GIRL!” exclaimed a concert-goer in the audience supporting Springsteen’s work.

The audience adored Springsteen because of her beautiful vocals, out-going personality and wonderful stage presence. Springsteen jumped around the stage, making sure that she was close to everyone.

“I don’t know what it is, but Dallas, I’ve been looking forward to Texas for a long time.. tonight is going to be special,” Springsteen promised to the audience.

It was true. Springsteen had the audience dancing the night away as those in the pit enjoyed their time listening and watching Springsteen perform while waiting for LANY.

Fans in the pit glanced at one another once hearing Springsteen cover fan’s favorite “Tequila” by Dan and Shay, and “Electric Love” by BØRNS. The audience sang their lungs out hearing the familiarity of songs that they knew as they jammed out and partied it up on a Thursday night. Springsteen held the mic out to the audience, and in return, the crowd left no-less than a beautiful amount of harmonization of a crowd full of passionate singers.

The 21-year-old country singer’s passion for performing showed on stage with her performance.

“This night is crazy…it has been my dream ever since I was 9-years-old to be on stage doing this and writing music. It’s all I’ve ever wanted. Thank you so much for being here,” Springsteen said.

After her energetic and lively performance, I was able to sit down and talk to the artist herself right after her set and gather the inside scoop of what inspires her and the process of how she feels when doing the things that she loves the most.

“I felt freaking incredible,” Springsteen said. “I’m like jittery…feeling all the energy all day today I’ve been feeling such good energy about this show. Stepping on stage and seeing how full the pit was, was incredible.”

Soon after, Springsteen excitedly showed me the hat that she purchased to wear for the show, as it was her first time performing in Dallas, Texas.

“My biggest thing about performing that I love and that I’ve always loved is that one-on-one connection…where you can share a moment together, just like finding singular people stepping out toward the front and being able to look at their faces,” said Springsteen.

With her long journey ahead of her, Springsteen moved to Nashville and signed her first publishing deal when she was only 14-years-old and is now dubbed “Nashville’s hottest newcomer” by Country Now.

During quarantine, she stopped touring to write and release a brand new project, “History of Breaking Up (Part One),” and interacted with her fans on social media via Instagram Live and TikTok.

“You really just got to dig into the creative side of things,” said Springsteen. “My first song was called ‘Fairy Tale,’ very fitting for a nine-year-old.”

Even after performing her opening set for LANY, Springsteen felt just as excited as her fans for the concert and experience.

“I’m a fan of LANY. I’ve loved them since their first EP came out. I love their music and honestly when I sat down with my agent for the very first time, we were talking about dreams and big goals and big pictures. LANY was one of the bands I mentioned that I would love to collaborate with just because I’m so obsessed with what they do musically, and I think our fans are very similar too,” said Springsteen.

After interviewing Springsteen, one of Springsteen’s biggest fans from Arizona, Estevan Andrew Rios, said that his “experience seeing Alana live for the first time after following her for around 2.5-3 years was a dream come true!”

“I counted down every month, week, day and minute until it actually happened,” Rios said. “I felt so overwhelmed with joy and happiness being able to attend this show and experience what I did tonight.”

While Alana Springsteen closed her part of the night with a down-to-earth, full-hearted performance, Keshi followed up with an ethereal, and elegant entrance. He played one of his classic R&B, lo-fi tracks “Beside You” that had those in the crowd calmly singing along to the artist. With the pit full of smiles and a calming aura, fans enjoyed Keshi while he charismatically greeted Dallas saying that it was great to be back and perform for his hometown.

Following a 20 minute intermission between the openers and headliner, the lights dimmed with pink lights and smokes filled the stage. A limelight shined as LANY’s drummer, Jake Goss, was the first to appear. In another flash of light, the entire band walked up as vocalist, Paul Klein, began singing “Get Away” in his Dallas Cowboy Jersey and a drawn on tattoo that said “TEXAS 4EVER.”

Klein proceeded performing his songs about breakups, makeups, exes, and budding romance to the audience. The night continued in a similar pattern while Klein played the piano, mixed in his interpretive dance, and dragged around a table from each end of the stage that he would move around and stand on while delivering steady vocals and clear lyrics.

Performing his most popular songs “Malibu Nights”, “Dancing in the Kitchen”, and “I Still Talk to Jesus,” Klein managed to make his slow songs shift smoothly into those that were more upbeat.

Despite having vocal strain on tour, Klein gave a strong performance. He ended the show with “Thru These Tears,” as loved ones were swaying in unison, dancing together, singing lyrics to each other and having the night come to a euphoric close when the band came back for their encore, “ILYSB.”

Overall, Alana Springsteen, Keshi and LANY complemented each other well with a well-balanced concert that left fans leaving with more than they expected.

The feeling each artist left for the audience marked an unforgettable night to remember with their exhilarating performance.