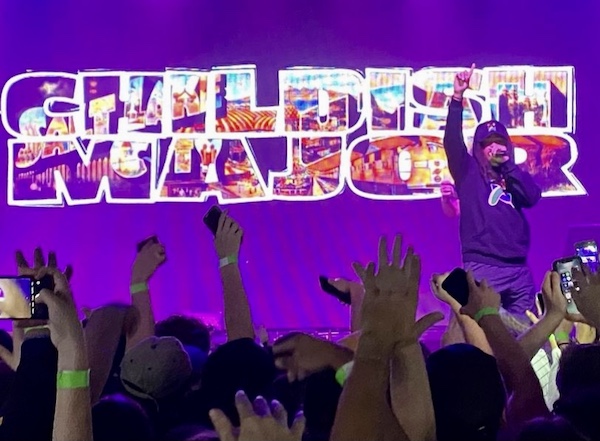 Major lit up the room with his energetic anthems and soulful bops. With his third project full of intention and sincerity, the artist performed songs like “Shine” from his 2018 Single, “Woo$ah” and “NoEyeInTeam” from his 2017 Album, “Player’s Prayer” from his most recent album “Thank You, God. For It All.,” and his newest 2021 Single, “Disrespectful.” Major even performed two of his unreleased songs.

Isaiah Rashad was ushered in by two of his like-minded industry pals Childish Major and Ray Vaughan, the new Top Dawg Entertainment signee who trended on the internet for his Leakers freestyle. Both the openers set the tone on stage for Rashad, making the concert feel timeless and seamless. With Ray Vaughan’s performance and Dallas Cowboys Jersey, he had the audience singing along and jumping non-stop.

For Childish Major, his performance set a relaxed vibe before headliner, Isaiah Rashad set the stage on fire.

“I’m definitely a fan of Childish Major and Ray Vaughan after that,” a fan said. “Having Childish Major opening wasn’t enough. I want him to go on tour.”

Rashad told a story through the backdrop of the various images playing behind him as he sang, relating to the theme of his album, “The House Is Burning” featuring artists like Jay Rock, Lil Uzi Vert, Duke Deuces, and more. Rashad’s energy never flagged, and there was not a dull moment in the concert. Although Lil’ Sunny’s Awesome Vacation tour was to promote Rashad’s third studio album, the artist performed some of his fan’s favorites “Shot You Down” and “Free Lunch” from his 2014 acclaimed debut studio album, “Cilvia Demo,” and his second studio album, “The Sun’s Tirade.” Many of his surprised fans went crazy in the audience after hearing Rashad’s most well-known songs.

The pit clammed together, and every person in the audience began to sing along with Rashad. Every voice in the room bounced off the walls as the well-crafted setlist united many of Rashad’s fans together in one room. Over the course of what felt like an everlasting time period, Rashad’s performance made a Wednesday night feel like a Friday night.

While many artists enjoy connecting with their fans on stage, one of the moments Isaiah Rashad and his friends shared with his fans was singing “Happy Birthday” to his close friend Kal Banx. Every person in the room had a smile on their face.

A fan of Rashads’ watching Childish Major for the first time said he liked how Major tried to replicate the energy he produced on the track during the performance.

“If the song was a slow stoner anthem, he would make sure to turn the energy back, and let the crowd recover,” said the concertgoer. “Rashad was the complete opposite of this, as he tried to make every song super hype even if it didn’t fit the song itself.”

Rashad’s performance lived up to the hype and wasted no time on the road in his compelling concert at South Side Ballroom with Childish Major and Ray Vaughan.