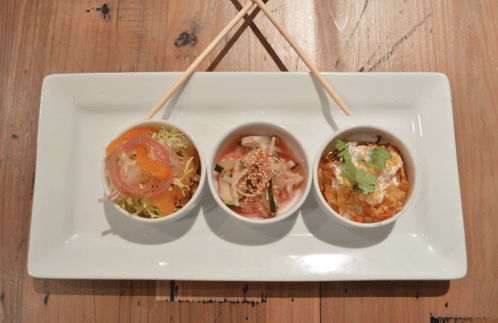 With Kanye West bringing pop-up shops around the world and restaurants that are only in cities for a limited time, it’s time to give some attention to Dallas’ own pop-up restaurant, Kitchen LTO. But this is a pop-up with a twist – it’s permanent. Kitchen LTO’s location stays the same while their chef and artists featured change every six months.

Kitchen LTO recently moved to a new space in Deep Ellum from their old location in Trinity Groves. “We wanted a smaller, more intimate space,” manager Michael Garrett explained about the decision to change to a new location. The restaurant is on their sixth chef, Joshua Harmon. Harmon is serving a Progressive American menu with worldly influences from places like Italy, Korea and Japan.

The restaurant also has a new feature called Gallery LTO where they feature work by up-and-coming local artists on the walls. All of the artwork is for sale and this allows artists to get exposure to the local community. The main artist being featured at Kitchen LTO now is Melissa Ellis, though other local artists’ pieces can be seen in various spots around the restaurant.

Kitchen LTO takes a refreshing twist on pop-up restaurants by staying in a permanent location. The pop-up trend has picked up popularity in recent years, but is disappointing to fans whenever the store or restaurant leaves the area. Kitchen LTO’s concept is smart in that it gives diners a restaurant they know and love with a new twist every six months.

Perhaps the best part of the restaurant is that it gives rising talent a chance to debut their food to the public and hopefully gain the experience to run their own kitchen or open a restaurant in the future. Think you’ve got what it takes to be the next chef or featured artist at Kitchen LTO? You can apply here.