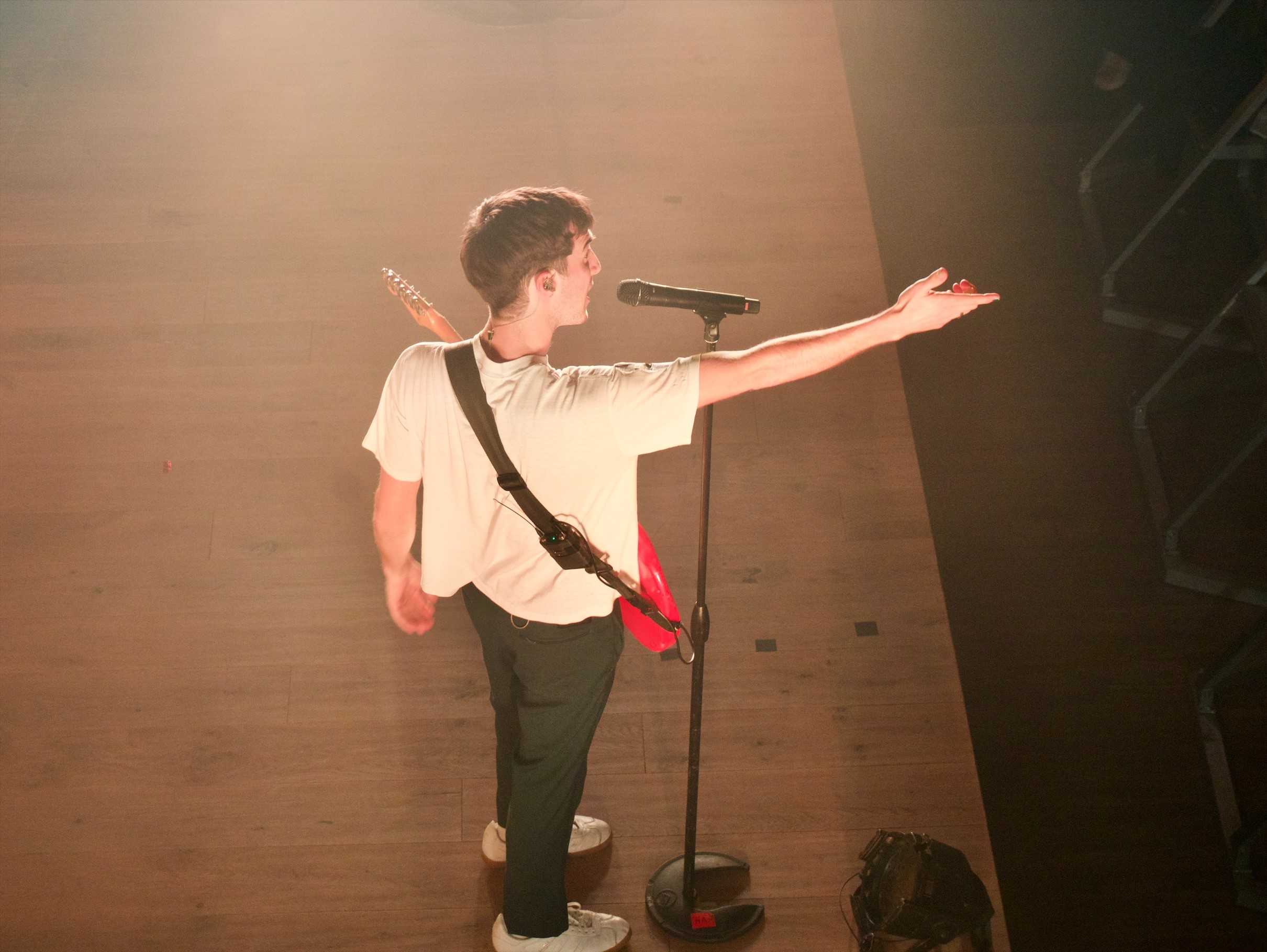 The rapidly growing and anticipated wait comes to an end as fans buzzed with excitement in The Echo Lounge & Music Hall on Feb. 25 to half•alive’s “Give Me Your Shoulders” tour. Debuting their second tour of the night in Dallas, TX since 2019, half•alive put on a well choreographed, smooth and unforgettable start to the weekend.

Known for their multifaceted, indie pop and electronic rock music, half•alive incorporates elements like R&B and numerous genres of music into the band’s sound. Creating an abstract and relatable beat to their music, the band demonstrates a vulnerable and intimate place for their listeners.

Opening up their show with a stretched out canvas covering all sides of the stage, lights filtered through the drape as half•alive comes out to their 2017 single “Tip Toes.” The band managed to set the tone of the concert with mesmerizing dance moves and grooves to the beat of the songs playing in the music hall. The band performed songs from their most recent album, “Give Me Your Shoulders, Pt.1,” including some fan favorites like “Hot Tea” and “What’s Wrong.” Despite performing songs from their 2019 album “Now, Not Yet,” on their “Give Me Your Shoulders” tour based on their most recent 2022 album, the band managed to have their fans, “The Gumdrops,” sing at the top of their lungs while endlessly dancing the night away.

Lead singer Josh Taylor didn’t leave his fans alone to dance. Complex, contemporary and kinetic – Taylor and the band touched base with Dallas by encompassing sharp and intricate moves into their choreography. The band made it easy for those watching their performance to establish a message of love, comfort and passion into their dances without having to hear a word or sound from those singing. Johnson and Carberry were able to bounce off of each other’s energy while building synergy with Taylor and those in the music hall.

One of the most memorable moments was when Taylor opened up to the crowd in a poetic tone. Taylor shared a story to the crowd about the beach and the bay.

“In 1940, a brick wall would stop enemy ships from coming into the harbor during World War II,” said Taylor. With the lights dimmed down in the music hall and the spotlight on Taylor, he shared the story of his great-grandfather who died in the war and losing his grandmother at only 6-years-old. Taylor’s relationship with his loved one’s and God set aside the artist from other bands like his.

“I got to the Bay – it’s calming. I get to the water and I step into an expanse of thoughtlessness…I’m getting deeper and I can feel the sand beneath my toes turn into mud. I go until I can’t touch, and I’m seeking something, but I’m settling for nothing except the fluke,” Taylor said. “The water is just pure reflection and in the distance the muffled symphony of persons worrying is somehow comforting to know its not only me, and I know I’ve wrestled with the truth for quite some time.”

While poetically sharing his feelings, he shifts his story into the half•alive’s 2017 single, “Aawake At Night.” Fans sang along with him as he teased the song into his poem transitioning to his dazzling 2021 single, “TIME 2.”

Gumdrops jammed out to half•alive with their newly purchased merchandise and cardboard posters. Losing themselves to the beat of the music, half•alive’s crowd shouted the band’s most popular song “still feel” while instrumentals played a tremendous role in the production of its upbeat performance. Evidently, the crowd and band united as a whole, creating a one-on-one connection that could only be felt throughout the music hall’s worthwhile wait.

Ending the night off with “Creature,” fans begged half•alive for an encore. With half•alive’s heartfelt and touching performance, meaningful choreography, crowd surf and Josh Taylor rocking a dog shirt with blue nails, the band strayed away from the stereotypical “boyband.” half•alive managed to interact with the crowd as much as possible. Among the electrifying colors beaming from every corner of the music hall and glaring lights shining on the band, half•alive delivered a funky, unique, and free-spirited show versatile to the Dallas demographic.