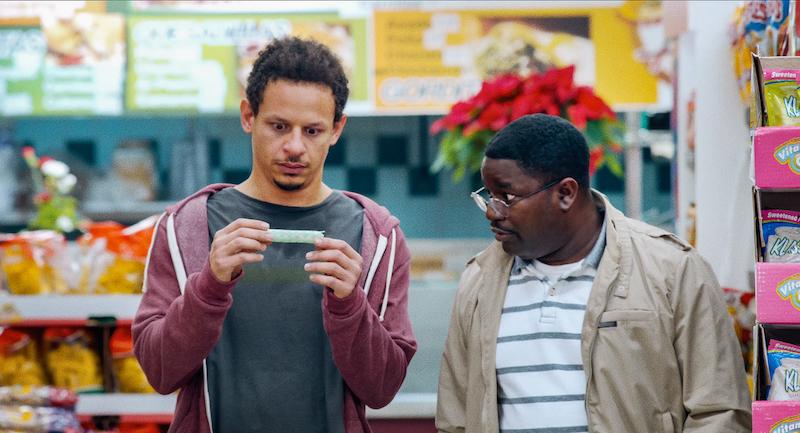 Before the world came to recognize Eric Andre as one of the boldest, most over the top faces of prank and gross-out humor, Andre said his “organs used to sweat from nerves” before approaching his unknowing participants.

Andre shares this factoid as he casually flips through virtual Zoom backgrounds ranging from strangely HD portraits of Tiger King’s Carol Baskin to grainy (and one would assume relatively recent) screen grabs of others in the interview room. In short, nerves are the last thing one would expect from anyone who has witnessed the gleeful chaos of The Eric Andre Show or Andre’s latest film project, Bad Trip.

“It is trial by fire, nothing prepares you for it until you do it,” Andre said of pulling off the pranks. “Rel and Michaela are just incredible performers so they got the hang of it right away…They know how to commit ­– under any circumstances under any pressure.”

Anyone familiar with Eric Andre’s brand of comedy will be unsurprised to find that Bad Trip holds an abundance of cringe, shock and spurts of bodily fluids. If, let’s say, seeing two men perilously maneuver their way through public areas with their penises enjoined in a Chinese finger trap would put you off a film, then Bad Trip just might not be for you. Yet the pranks themselves, no matter how far they push the boundaries of decency and believability, are only half the experience of Andre’s absurdity.

“I think there’s good bad taste and bad bad taste when you’re doing shock art. You’ve always got to figure out what feels like you’re dancing on the edge in a good way and what feels unethical,” Andre said. “Comedy is a game of millimeters…But at the end of the day we’re trying to make everybody, not just the audience at home but the people we’re pranking, laugh. There’s no malicious intent, and I think intent and context are the DNA of what makes any comedic event feel good.”

And throughout the movie, Andre, Rel, and Conlin push their characters and the people around them as far as they can go. While the absurd hilarity of their pranks certainly carries the surface story along, the authentic reactions from their surroundings creates a piece filled with moments that are undeniably human and hilarious.

The sincerity of the unsuspecting participants, whether it be their pure glee at seeing an undercover Tiffany Hadish rip the door off a cop car or paralyzed disbelief at the sprays of vomit and blood that emit from Andre throughout the film, keep you glued to the screen in confusion and perverse enjoyment.

Bad Trip is available to stream on Netflix.