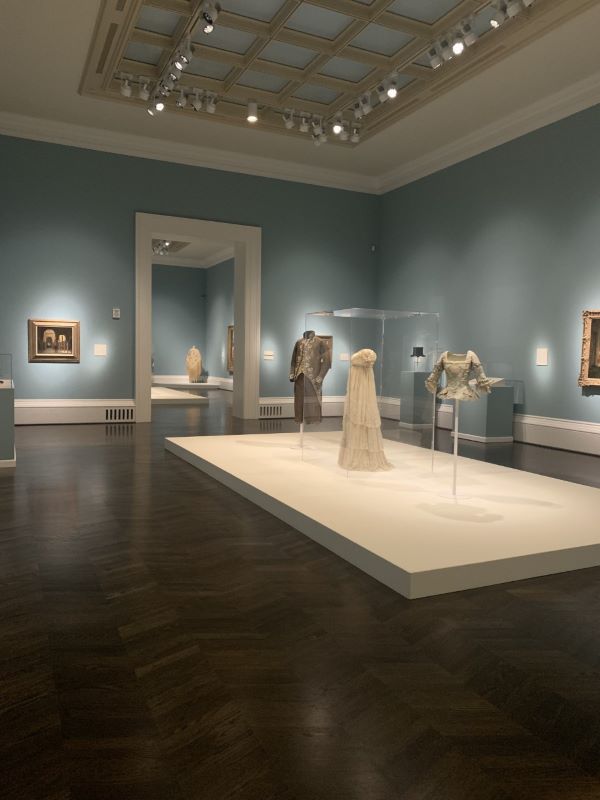 “The idea for the exhibition happened in a very Madrid way, over a glass of wine at lunch with González,” Dotseth said. “We always wanted to collaborate as friends and colleagues, but now we were both at institutions where we make that happen.”

When displayed in conjunction, the pieces in the exhibition comment on 400 years of Spain’s history, changes in national identity and involvement in global trade through fashion trends.

“Garments and dress are more than sculpture, more than two-dimensional things,” Dotseth said. “Unlike paint on canvas, we have objects that bring together so many different kinds of materials and processes that come from all over the globe. They are evidence of the power of an empire of an increasingly global network that allows things to be brought together in multiple different types of craftsmanship.”

Some of the exhibit’s themes include “Precious Things,” displaying accessories made from materials such as coral; “Traditional Dress” exemplifying Spanish fashion through garments such as a traje de luces (a suit worn by bullfighters) and mantón de Manila (embroidered silk shawls historically traded through Manila); and “Stepping Out” explaining the significance public attire.

“The old clothing and trinkets are the kinds of things that my grandma likes to see museums,” junior Abby Tirey said. “I missed her while I’m here in Dallas, and this reminds me of going out with her.”

The traje de luces pairs with Ignacio Zuloaga’s painting, “The Bullfighter” or “El Segovianito,” and mantón de Manila displayed is similarly replicated in Zuloaga’s “Portrait of the Duchess of Arión, Marchioness of Bay.” Another section of the exhibition, “Symbols and Silhouettes,” explores modern and haute couture, pairing a hand-painted dress and shoes by 20th century fashion designer Manuel Piña with Joan Miró’s painting, “Queen Louise of Prussia.”

“There’s so much creativity, effort and work that’s put into fashion and the way people express themselves,” Said Eman Haque, art history major and Meadows Museum Student Collective volunteer. “This exhibit is so unique because they match the paintings with the outfits, and it’s also just so cool to see how things were back then in contrast with some contemporary pieces.”

Akemi Luisa Herráez Vossbrink, the 2020-21 Center for Spain in America (CSA) Curatorial Fellow at the Meadows Museum, curated an accompanying first-floor exhibition, “Image & Identity: Mexican Fashion in the Modern Period.” “Image & Identity” builds on the themes in “Canvas & Silk,” focusing on images of Mexican fashion in photographs, prints, books and gouaches from the 19th and 20th centuries while showing the formation of national identity through Indigenous dress.

“Fashion is still with us, shapes are still imposed and comfort is still compromised,” Dotseth said. “I hope this exhibition touches on the ongoing story of what we wear, why we wear it and where these things come from.”

One thought on “Fashion from Afar”