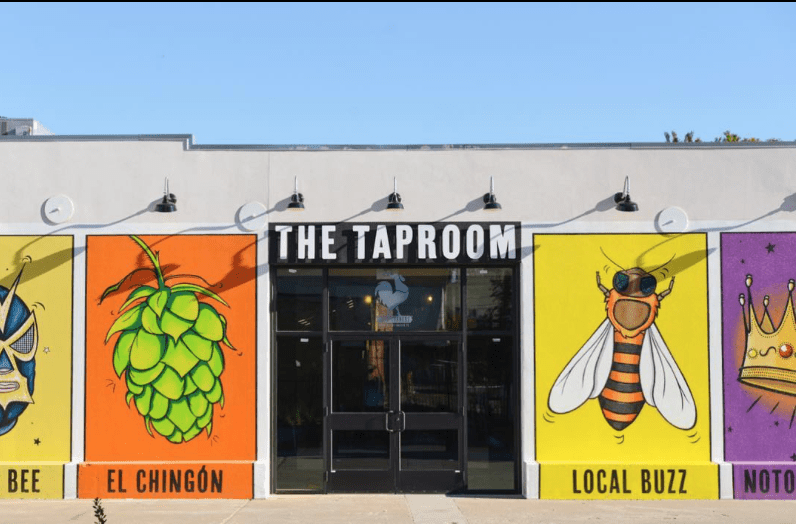 Moving a brewery across town is no easy task. But that’s exactly what the Four Corners Brewery team did as they relocated from their West Dallas location to a new, 18,000-square-foot facility with an adjacent 10,000-square-foot taproom.

Four Corners’ favorites are now on display in what were supposedly the former stables to the nearby Ambassador Hotel; the history shows. The taproom, with its exposed beams and open spaces, is humming with energy.

While the brewery has moved farther away from its namesake — a reference to the “four corners” intersection of Davis Street and Llewellyn Avenue in Oak Cliff — it still embodies the neighborhood’s vibrancy.

With the brewery’s punchy, lotería-style imagery plastered on the taproom’s side, outdoor patio and outdoors neon signage, Four Corners is seeking to make the Cedars the latest hangout spot.

In recent years, the area has become known as the home to South Side Ballroom, Alamo Drafthouse — and not much else. So, only time will tell how well the taproom does.

But the new menu designed by Cafe Momentum‘s Chad Houser doesn’t hurt. Featuring quirky bites like pierogi and pork belly tater tots, it’s hard not to want to grab a snack, down a beer and stay awhile.

The Daily Campus spoke with the brewery founders in 2014 before they moved to their new location. Here’s what they had to say: