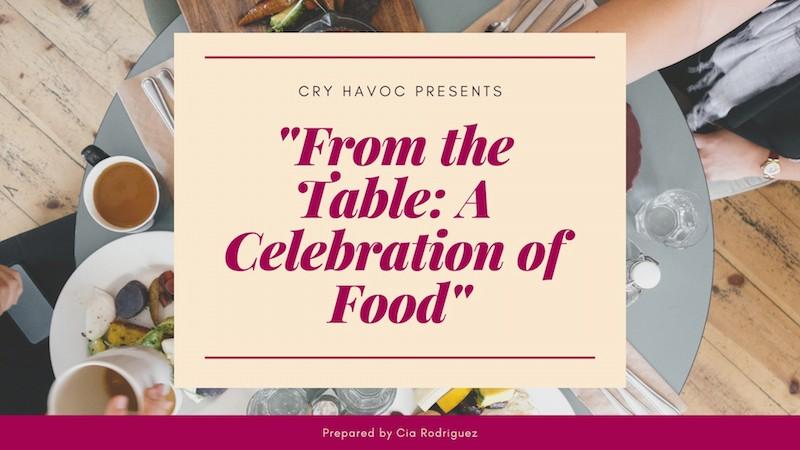 There are 10 folding black chairs lined in a row. They remain empty just for a moment before a troupe of young women enters the stage. As the chairs begin to fill with bodies, the room begins to brim with sound. Four, five, six different conversations bounce around the stage, though some pieces of dialogue can be identified from the clamor:

“Do you have any vegan options?”

Disorienting yet likely familiar, this conglomeration of conversation, arguments, chatter, and gossip is just the beginning– only a taste– of what is to come. The stage reaches its audible climax, and the lights go out as if to say, “This is our table.”

This opening scene kicks off Cry Havoc Theater Company‘s first play of 2019, a 70-minute devised performance titled “From the Table: A Celebration of Food.” Cry Havoc was founded in 2014 by Mara Richards Blim in an effort to provide an environment where talented students are given the opportunity to pursue challenging roles and be rewarded “purely on their talent rather than on their ability to pay.” With five years under its belt as a company, Cry Havoc has put on a number of riveting performances and is looking forward to another exciting and ambitious season.

“From the Table” opened just two weeks into the new year, and perhaps fittingly so. Adults and students alike must bid farewell to the comforting homecooked meals of the holiday season, likely returning to the reality of convenience: instant ramen, the drive-thru line, frequent snacking, or even the times spent eating alone at the table. These realities are part of what drove Cry Havoc to devise a play focusing on society’s relationship to food and its effect on how people experience life and cultivate relationships.

Part of what makes the play incredibly unique is the amount of work that went into devising the play itself. For those unfamiliar with devised theater, Cry Havoc Founder and Artistic Director Mara Richards Blim provides an explanation.

“The simplest answer I can offer is that it’s theatre created by an ensemble without a pre-written script,” Blim said. “The director walks into the room with an idea or a concept, and the actors, designers, and other professionals work together to create something from nothing.”

Though the concept sounds creative and thrilling, do not be fooled into thinking that it is a feat easily executed. “Each sixty seconds the audience sees onstage in the final performance takes roughly sixty minutes to create,” Blim said.

This tedious creative work is no doubt exhausting, but the fruits of the labor of the actors, directors, and the production team is apparent in every line spoken, every dance choreographed, and every scene that effortlessly transitions to the next.

A variety of transitions occur as the troupe paves their way through the history of humanity’s relationship with food. The audience watches as the stage transforms into a primal scene defined by low drums and the grunts and howls of cavemen hunting. Obtaining nourishment is presented as a dangerously raw and unrefined experience. Another memorable scene results in a huge leap forward in time. Three people stand in a line in front of a table. They move robotically to beats of synthetic and highly manufactured music. They are packaging food in an assembly line. Their mechanical movements, paired with the beats playing in the background, contribute to a difficult depiction of how artificial and manufactured food has become.

Other culinary areas of history and cultural phenomena are covered as well. There is the hilarious spoof concerning Swanson TV dinners in which the entire scene feels reminiscent of a ’50s commercial gone awry. In addition, the playful take on a wedding toast that is interrupted by a person that gets too drunk and decides she wants to make a speech of her own. There’s always one.

These moments are not only comical and entertaining to watch, but also contribute to an overall chronology of how food has evolved since the earliest stages of humanity. What was once taken as an activity purely for survival has evolved into something we take part in for pleasure, comfort, and even as a means to connect with others. “From the Table” explores a variety of perspectives on humanity’s relationship with food, both from the healthy moments where it brings us together and the unhealthy ones where judgments, calorie counting, fat shaming, etc. can tear us apart.

It’s true, our relationship with food is tumultuous at best. Yet the play directs our attention to something that may help humanity reckon with its checkered culinary past: acceptance. In the end, people hope to come to the table and eat among family, friends, or even strangers, who will accept them as they are and will break bread with them without judgments and side glances.

Near the end of the play, one young woman steps forward and addresses the audience. “At my table, we serve love.”

The line could not be more appropriate, as Cry Havoc is partnering with Café Momentum for the production. Café Momentum is a Dallas-based restaurant that provides an environment for young men and women who have spent time in juvenile facilities to work and receive intensive job training in the culinary field. As the play comes to a close, the cast invites the audience to literally join them at the table for a meal cooked by the Café Momentum youth.

Family, friends, and strangers gather on stage and wait in line for their portion. Chatter and conversation bounce around the room, though this time there is no blackout. Instead, the room appears brighter and fuller somehow, as if to say, “Welcome to our table.”