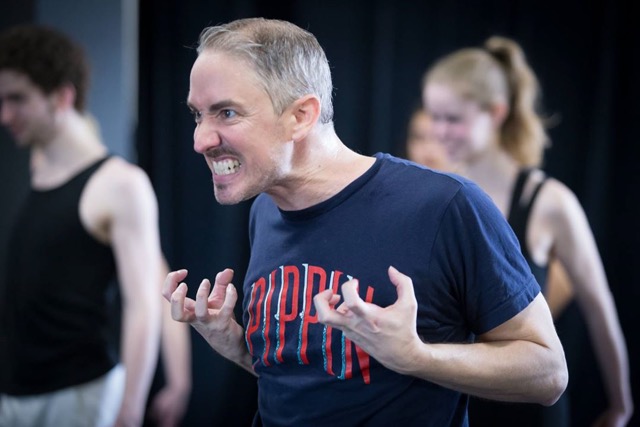 Editor’s Note: This story was originally written in May 2021.

Mark Burrell’s life is not confined to one style.

He finds excitement in bringing together differences.

He loves to mix things up.

“That’s kind of my life. My life is a hodgepodge of styles,” Burrell said.

The choreographer’s background with a combination of dance styles and influences continues to serve as his inspiration for choreographing today.

Burrell brought his artistic vision to life and inspired the dancers at SMU as a visiting artist-in-residence. Last spring, Burrell got to stretch his artistic abilities by choreographing a piece in the spring dance concert.

As a young dancer, Burrell was taken with the theatrical aspect of dance as well as the moves of Michael Jackson. Burrell’s mother was the one who originally introduced him to the world of dance.

“My mom has never found fear in letting me try things,” Burrell said.

Burrell was trained in all classical styles, but jazz had a great impact on his life. None other than Bob Fosse, the iconic musical theatre choreographer, dancer, performer and director, and his wife Gwen were some of Burrell’s strongest mentors.

“Gwen really took me under her arm and showed me the love and appreciation for musical theatre and how much dance pushed forward the idea of theatre,” Burrell said.

Studying dance at Juilliard, the renowned performing arts conservatory, and taking a leave from school to dance on Broadway his sophomore year spurred his love for dance and theatre.

After performing and reaching new heights of his career by reinventing and working as the associate choreographer for Pippin, the Broadway musical, Burrell decided to transition to other ventures outside of the Big Apple.

Burrell says that choreographing for universities and dancers outside of the theatrical realm stretched his artistic vision as he was able to choreograph beyond the technical steps.

“I feel like that helped me as an artist and as a choreographer to dive into the content…and allow that to really speak for itself,” Burrell said.

As a visiting artist-in-residence at SMU, Burrell was a valuable teacher and mentor for the whole dance department.

“He brings something like no other professor has,” said Annabelle Daniels, assistant to Burrell for his spring concert piece. “He is just unique within himself. He is fully dedicated to his work, and he invests himself so much into the dancers and their success…he just brings out a different side of the dancers that they didn’t know they had.”

For the spring dance concert at SMU, Burrell decided to once again fuse his different styles of dance with a range of dancers, as well as an important message for the community.

His piece “We the People” included a large spectrum of different races, ages, genders and dancers.

“That equity felt important because I wanted to make sure that those outside conversations were reaching as many people as possible in the division, so that the division was coming together as not just classes, but as a community,” Burrell said.

Burrell wanted to bring a message of unity. Not only was the piece a combination of important messages with spoken word pieces by Maya Angelou featured, but there was also a large range of dance styles and moves.

“To fuse it all together like that was my way of putting Mark inside of the commentary of “We the People’,” Burrell said.

Burrell’s dancers were pushed and challenged to be their full vulnerable selves as an extension of the piece and its message.

SMU dancer Jalen Jones said that it was a privilege working with such an incredible mentor like Burrell.

“I was so excited to dive into his world; that’s what he calls what he does,” Jones said.

During the audition for Burrell’s piece, Jones noted the authenticity in the improvisational dance that was required of his dancers just as much as it was in his piece.

As the piece addressed important messages of identity and unity, Burrell continued to make every move important and pushed the dancers to be their full selves during their dance.

“One thing that I felt like was really achieved in this piece was that all of these dancers came out and were incredibly vulnerable. And that, to me, I think was the most exciting part of the piece, watching these unique voices come to life and how they changed nightly,” Burrell said.

The intentionality in Burrell’s choreography and artistry is something that stuck out to Daniels as she was able to observe him and his choreographic process.

“There was not one thing that wasn’t there for a reason,” Daniels said.

The stylistic mix of choreography and voices of dancers that needed to be heard was something Burrell was excited to create.

“It seemed like the right time to create a voice that is needed in the arts,” Burrell said. “That’s what the arts do. The arts challenge sociopolitical ideas, and I wanted to try that. I wanted to really dive into that, and on top of it all, I wanted to use the currency of my student’s voices to help me.”

The dancers were pushed to be the best and most vulnerable versions of themselves through Burrell’s choreography, and his encouragement is what allowed them to get there.

“As dancers we stepped up to another level to achieve what was demanded of us, especially because Mark knew that every person in that room was capable of so much,” Jones said.

Burrell continues to be modest, though the impact he has on dancers is phenomenal.

“These dancers put their full embodied investment into my work. I created the sketch. I created the movement, but it was one hundred, thousand, million percent a collaboration,” Burrell said.