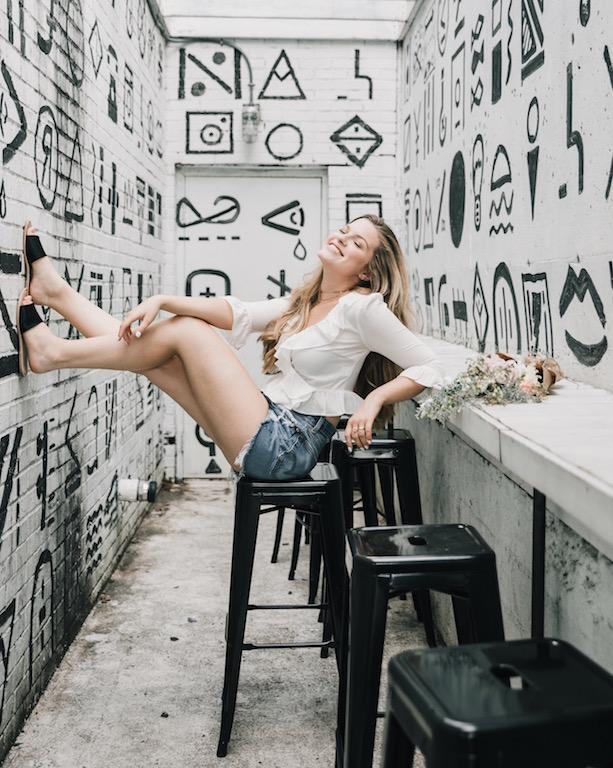 Her creative ability and eye for fashion shaped her life as it is today but it did not come without hard work, dedication, and passion for what she does.

On starting her own blog:

After trying out a YouTube channel and finding it uncomfortable and unfulfilling, Meredith decided to try out blogging, a more professional platform to show off her writing skills. She grew up with family and friends asking her fashion or makeup related questions, so she decided to share her knowledge through a blog.

“I love writing and being creative; I love makeup and hair,” Meredith said. “I like looking put together because it makes me feel better and makes me feel like I have my life together. It’s a good way for me to express myself.”

Where she finds inspiration:

“Finding inspiration is one of the hardest things,” Meredith said. “It is especially hard at college because we are in such a bubble and I don’t have as many sources of inspiration.”

“The reason why I started doing the graphic design stuff on my Instagram was because I saw it and thought it was totally up my alley.”

Life as an “influencer”:

“First of all, I hate that word,” Meredith said. “I am going to start with my least favorite part.”

As an “influencer,” Meredith gets offers from brands to post about their products, but she does not like to accept them if she does not believe in the product.

“It is hard to say no sometimes, but you have to because you don’t want to be promoting something that you actually don’t like. That defeats the purpose of being an influencer,” she said.

Her favorite part is helping and connecting with people. She really enjoys just “helping people in general,” which she does through posting for her community of 4,000+ followers who support and value her opinions.

Meredith followed SMU Look on Instagram before coming to SMU in Fall 2017.

“A graduated staff writer who used to work for Look interviewed me when I was a freshman about my blog,” Meredith said. “I thought it was really cool and I applied afterward.”

“I always kept a journal and I always enjoyed writing essays in high school, and I love fashion,” Meredith continued. “It just seemed like something that would really fit with what I wanted to do.”

Wanting to be more involved in SMU, she knew SMU Look would be a perfect opportunity for her to do what she loves while working for a well-respected campus magazine.

On what she has learned after working as a Senior Editor of SMU Look:

After starting out as a staff writer for SMU Look during her freshman year, Meredith has now moved her way up to Senior Editor. She has a lot of freedom with this editing job because she still gets to write while also having a say in what makes the final cut of the magazine.

“It’s not as glamorous as being a writer and it’s definitely a lot more stress because you’re actually in charge of something,” Meredith said. “But I feel really accomplished when the magazine comes out because we handpick everything that goes in it.”

She said she is proud of the stories she has published in the magazine. As an editor, she has the ability to push the magazine in the direction she wants it to go with the help of the other editors and the editor-in-chief.

On how she balances her workload from Advertising, SMU Look and her blog:

“My first priority is always school,” Meredith said. “That’s what I’m here to do, and I love my major and being in the creative department. SMU Look is my second priority because we have meetings every week and extra meetings with the editorial staff.”

She feels she has the most responsibilities for her Advertising classes and for SMU Look because other people are relying on her to be prepared and have her work done.

“With my blog, I am the only person holding myself accountable,” she said.

This is why she finds it hard to stay motivated for her blogs; it is easy for her to push off the work since no one else is counting on her to have it done by a certain date. She admitted that she hasn’t posted on her blog since December. However, she goes through periods where she is really motivated and feeling very creative and inspired.

On her dream job after college:

“I am majoring in Creative Advertising and Journalism with a French minor,” Meredith said. “It’s a lot of random stuff that I enjoy, obviously.”

“I would love to work as an art director at an ad agency,” she said. “I would also love to be a creative director at a magazine. Obviously, Editor-in-Chief of Vogue is the dream.”

She wants to incorporate her love for fashion into her career by working for a fashion brand as a creative on the client side of a company.

She also added that she would be happy to continue with her blog later in her life after college and then even eventually as a mother. She would write relatable blog posts for young 20-somethings trying to figure out life or even for mothers adjusting to life with children.

On what kind of advice she would give to someone who wants to start a blog:

After being in their shoes once, Meredith has many different pieces of advice to give to people wanting to start a blog.

“Posting consistently and getting your stuff out there is really, really important,” she said.

She mentioned that she struggles with consistency in her own blog posts, but she notes that it is important to carve out time to post, especially for her followers.

“I never used to care about my ‘likes’ or my ‘ratio’ [on social media], but you kind of have to start worrying about that when you’re an ‘influencer’”.

She tries not to become consumed with her analytics like her number of likes, followers or how many people look at her blog posts.

“Remember that you are a good person and that numbers don’t define who you are. Post for you, write for yourself, and do it because it makes you happy, not because it’s an obligation,” Meredith said.