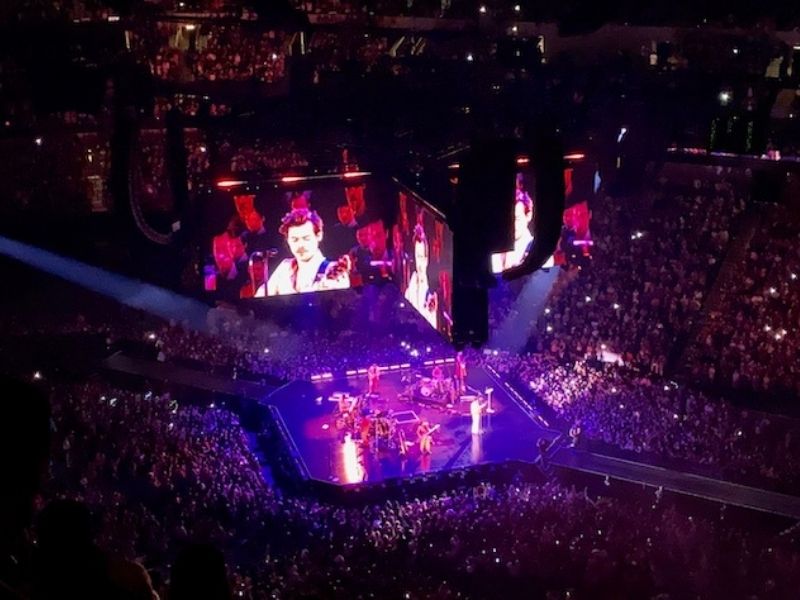 A year after the pandemic postponed his original “Love on Tour,” Harry Styles took the stage at The American Airlines Center for his sold out show on Saturday, Sept. 11, 2021 in Dallas. Many of Styles’ fans showed up dressed in a wide array of colorful, funky and retro outfits that rocked and grooved the stadium’s atmosphere.

Singer-songwriter Jenny Lewis opened for the concert in a tinseled-sequined bodysuit romper. She created a welcoming environment that built up excitement for the concert’s entirety. Lewis thanked the fans and Harry Styles for having her open the concert.

“It’s pure love – love on tour, that’s what we’re doing for this one,” said Lewis.

As Lewis left the stage, fans refused to let the energy of the crowd die down. While waiting for Styles to appear, they passionately shouted out the lyrics to One Direction’s 2015 song, “Olivia.”

Soon, the lights began to dim and Harry Styles’ backing band entered the stage in all-pink attire to the sound of Queen’s “Bohemian Rhapsody.”

When the tune of Styles’ “Golden” played loudly and filled the air, Styles himself rose up from center stage in an all-white outfit, and filled the stadium with flashing lights.

At the concert, Styles’ message was “Treat People With Kindness.” Styles advocated for COVID-19 precautions in a voice-over that played during intermission:

“I want to thank you guys for getting vaccinated or tested to be able to come here tonight. The staff on the entire Love On Tour team has done the same and we are all taking the precautions we can to make sure these shows can happen safely. I know things are a bit different, but in order to protect each other, I also ask that you do your part by keeping your masks on while in the building and during the show. I’ve always found that you can tell the most about a person from their eyes anyway. Treat people with kindness. I love you and I’ll see you very soon,” – Harry Styles

“I had the best time,” former SMU student Sevval Erenkol said of the concert. “The arena was packed and everyone had one thing in common: a love for Harry and his music.”

Erenkol stated that she, like others, was upset when the concert was first postponed last year.

“It’s been nearly two years since news of the tour and it was a long time coming,” Erenkol said.

But after the wait, those who attended the concert seemed to be fulfilled with the performance and energy that Styles and his team created. No matter where you were seated, Styles was directly in view, and the singer took multiple breaks to interact with the audience.

Styles sang Happy Birthday to two fans and playfully shouted, “We love Jeff!” to a father in the audience. When a cowboy hat was thrown onto the stage, Styles tilted the hat down with a simple “yeehaw,” to the delight of his Texan audience.

Styles started and ended the show with positive messages to create a fun and enjoyable atmosphere for all genders and ages.

“Over the last year…18 months, all of us have been through something collectively, and…every single person in this building, has been through something individually,” Styles said. “This is my favorite thing to do, and in the darkest times, thinking that one day I’ll be back up here meant so much to me…Thank you so much for everything you did to be able to be here tonight.”