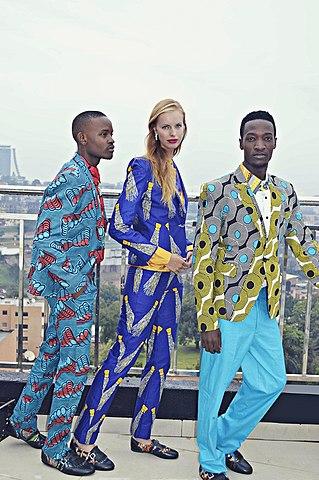 Throughout history and still today, androgynous fashion is a force behind political movements and defining identity.

Stories of cross-dressing have existed in nearly every culture since the beginning of time, but a woman named Gabrielle Chanel changed the game in the 1910s by giving women the gift of pants. For many, this is considered the birth of androgynous fashion.

It wasn’t women in pants trying to be men, rather it was women wearing pants while still being women. Ironically, this coincided with the beginning of the Women’s Suffrage.

For the next several decades, movie stars like Katherine Hepburn and designers like Yves Saint Laurent continued to push the envelope on women’s fashion.

Despite the radical changes in acceptable women’s apparel, men experienced little no changes until the late 1960s.

Known as the Peacock Revolution, this counter-culture movement was hailed in by David Bowie, Jimi Hendrix, and the Beatles. These music icons played with feminine silhouettes by wearing heeled boots, skinny jeans, and ruffled shirts.

Men began to shake loose from the conforms of masculinity without questioning their sexuality.

Perhaps no one did this better than the legendary Prince, who wore go-go boots and sequins while maintaining his image as a sex icon for women. In addition, the rebellious tone set by rock bands of the 1970s-80s inspired many men to sport pierced ears, eyeliner, painted nails, and long hair.

In the grand scheme of things, the fashion leaps made by men were miniscule in comparison to those made by women.

Dr. Myles Lascity, a journalism professor and the director of the Fashion Media program at SMU, speaks more on the issue.

“If something is going to become unisex or gender neutral, it’s always the men’s side that takes precedent,” Lascity said. “It wasn’t ever the female garments, but now we have a trend of it going the other way.”

Lascity thinks the fluidity from the other direction (men to women’s garments) was largely started by Jaden Smith when he modeled for Louis Vuitton in a skirt. In spite of all this, Lascity was quick to note that this trend may not get much traction.

“There’s haute couture, and then there is what we are wearing. We are moving towards athleisure wear and less formality,” Lascity said. “It’s sort of sad to say, but if we are going to see unisex fashion, it’s going to be in the athleisure wear, and not necessarily guys in skirts.”

Even though gender fluidity may only fit the formality of a runway or red-carpet, it has become more visible in the media and gives a voice to people who don’t conform to the social constructs of gender.

For example, Fred Holston, identifies as non-binary and works for the Kim Dawson Modeling Agency in Dallas. One of the reasons they entered the fashion industry is because they were attracted to the nonverbal communication of identity that style provides.

“I can speak to my experiences as someone who was assigned male at birth adopting more feminine characteristics/presentation, and the ways in which that has created some potentially unsafe and uncomfortable situations for me,” Holston said. “For example, in childhood—characteristics perceived as male manifesting in a young girl is often met with the endearing title of “tomboy”, but when femme characteristics manifest in children assigned male—there isn’t necessarily an equivalent terminology, and often this behavior is feared or discouraged.”

Thankfully, there are people who want to change the way we wear, advertise, and talk about fashion.

Alessandro Michele, the creative director of Gucci, is spearheading this movement in the luxury fashion industry. In 2016, he decided to combine the men’s and women’s shows together—ditching the idea of separate, gendered collections.

On any Gucci runway, you can expect to see men in dresses and sequins, and women in suits. Gucci also released a short fashion film called “The Future is Fluid” which features 13 young people from around the world to tell the story of how they are blurring the lines and redefining the world “through a prism of fluidity”.

Gucci ambassador, Harry Styles, has become an icon for his gender fluid style and co-chaired the annual fashion event of the year, the Met Gala.

The theme of the 2019 Met Gala was Camp, which is defined as the “love of the unnatural: of artifice and exaggeration” according to Susan Sontag’s 1964 essay. The origins of Camp date back to queer culture in the 1600s, and it is often associated with androgyny and drag.

“We’re experiencing a resurgence of camp not only in fashion, but in culture in general. Camp tends to come during times of cultural instability,” Andrew Bolton, the curator of The Costume Exhibit, said.

Fashion journalists and critics were quick to associate the theme as a response to the “age of toxic masculinity in Trump’s America.”

The Camp theme inspired some of the world’s most honorable and recognizable men to cross countless gendered fashion boundaries for the event. As they walked up the pink carpeted steps of the Met, they broke the traditional masculine molds by sporting sequins, fur capes, earrings, painted nails, heels, dresses, crowns, ruffles, and makeup.

Despite the fact that Camp is supposed to be excessive and outrageous, these Met Gala looks will inspire us to view fashion in a different way.

As society progresses, we can see a direct correlation between the rise of androgynous fashion and the acceptance of the LGBTQ+ community, particularly gender identification rights.

Gender is a social construct that is many times reinforced through clothing. So what better way to fight the system than redefining it with its own weapons?