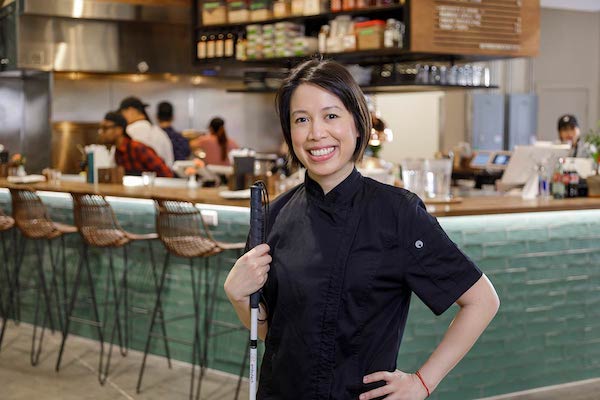 Like many of us when we were children, Christine Há was a very picky eater. Born in Los Angeles and moved to Houston at the age of 2, Há explains that her parents were Vietnamese refugees who came from Vietnam in 1975 looking for more opportunities and a better life. Há lost her mother at the age of 14 to cancer. “She never taught me how to cook,” said Há. “It wasn’t until college that I missed the food that I grew up eating.”

Há bought her own cook book, cheap sets of pots and pans, and knives when she attended the University of Texas at Austin.

“I remember one of the first unsuccessful dishes I cooked was fried rice,” said Há.

It was her unique Chicken Brazed in Ginger dish, that received positive feedback from her friends, that ignited the passion of the successful chef we know today.

“I remember looking around the table and seeing my friends smiling and satiated. Their bellies were full and they were happy, and that was the moment I remember I fell in love with cooking,” said Há.

Being able to create something with her own two hands, making people happy, and feeling fulfilled from cooking was something Há looked up to most. She began to read lots of cook books, read recipes, and learned about ingredients and cooking techniques that started her cooking journey in college.

“I remember driving and noticing that one eye was just blurry. I thought it was my contact lens,” Há said.

At the time, the chef had hopes of her vision returning back to normal, however it did not. Years later, Há was diagnosed with Neuromyelitis optica (NMO).

While the chef experienced very serious NMO flare ups, she became completely paralyzed from her neck down in the span of three to four days. After regaining feeling in her body, she got the opportunity to audition for MasterChef.

Having to relearn how to cook after her vision was lost and joking around with her husband that she would get kicked off the show, Há won season 3 MasterChef 2012. Due to her success, Há has four core values on how she lives her life:

1. Be better today than you were yesterday

Há: This is something I really took away from the time at MasterChef: In the end, I feel like I wasn’t competing against other people, but more of my former self. This is something I take into everyday whether that is public speaking, being the boss lady at work, being a chef, or doing menu development.

2. Experiment without the fear of failing

Há’s most famous scene from MasterChef was her apple pie. Working alongside Gordon Ramsey in the show, “I remember Gordon asking me “Christine what do you think of your pie?” and I remember him being British so I used the word “rubbish,” and I told him it was a pile of rubbish” said Há.

This moment was a turning point for Há on the show.

“It gave me confidence,” Há said.

After the show, Há knew that she had to serve her famous apple pie from the show at her two restaurants: The Blind Goat and Xin Chao located in Houston, Texas. She explains the struggles that she had with implementing an American dessert into her modern Vietnamese restaurants. Because of it, she stayed up with her husband experimenting different ways that she can turn an apple pie into a dish that infuses Vietnamese flavors. John pitched the idea of adding fish sauce into the apple pie for a sweet and salty taste. Even though Há questioned the idea, both she and John created a fish sauce caramel apple pie that was surprisingly delicious.

“Experiment without the fear of failing, because you never know if it might catch,” Há said.

3. Commit to helping those around you

Há said this sentiment is one she has learned from her husband, who she feels is very generous.

“We use the fortunes that we’re given to help those around us,” said Há.

During the pandemic, restaurants faced the struggles of reeling in business. Há and her husband “started making meals to feed front line workers and first responders and medical industry folks.”

Despite having many challenges with their restaurant during the pandemic, they felt they “had to find a way to help our communities,” Há said.

“Life is too short to be doing something you don’t enjoy,” said Há. “The greatest rewards come through the greatest challenges. It’s really how you play that hand you’re dealt with that makes you become more resilient and build your strength in your character.”