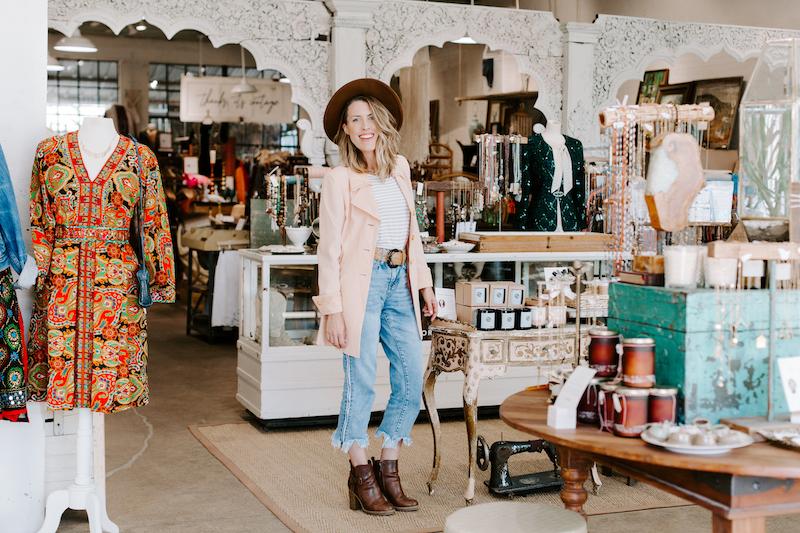 After interning for two years at the Dallas Morning News as a full-time student, Brittany Cobb graduated early from SMU to fill a job that the paper held specifically for her. She graduated in December 2004 with her journalism degree and drove straight to the newsroom.

“I always thought that’s what I was going to do,” said Cobb, who had a lifelong love for fashion and worked for a former publication at the paper called Fashion Dallas.

Cobb later became a freelance journalist after a move to New York City and wrote for numerous publications including Lucky Magazine, DailyCandy and Forbes. Not only did Cobb learn how to juggle different stories as a freelancer, she also got a taste for what it was like to run a business. A personal business.

More than a decade later, Cobb is an established entrepreneur with a growing empire of retail stores. She is CEO and founder of five stores in the DFW area including Flea Style, Game Day Style, Wide Brim and restaurant Heirloom Haul.

As an early-career journalist, Cobb saw the industry change in front of her eyes with advertising dollars slipping away. She watched many people lose their jobs, which got her thinking what her next step would be. She knew she was young and wanted to keep herself viable.

While living in New York City, Cobb fell in love with shopping small at the Brooklyn Flea. It reminded her of her Californian life and opened her eyes to unique style and eclectic layering as a fashion journalist.

When Cobb’s dream job of working for former publication DailyCandy opened up in Dallas, she jumped on it and moved back. In the meantime, flea markets and shopping small continued to draw her interest.

Cobb wanted to pursue her dream of bringing the Brooklyn Flea concept to Dallas as a side hustle. With DailyCandy’s blessing, Cobb lined up vendors for her own holiday flea market, Dallas Flea, on December 4, 2009. However, around Thanksgiving a few weeks before, she got laid off from DailyCandy.

“Luckily, I had this market a week later, and it went well,” said Cobb. “I thought, ok, I was thinking once a year, but maybe this is my new thing.”

She was right. This was her new thing. Cobb tried out some other career paths but missed her flea markets and supporting vendors. She hosted quarterly markets over the years to fulfill her flea market bug but learned people wanted to shop her markets all the time.

She tabled the retail concept to raise her two children but knew it would happen someday. And over the past four years, her entrepreneurial ambitions have turned into reality.

She opened her first location in June 2018 in Deep Ellum. A second Flea Style location and its sister store, Game Day Style, opened at The Star in Frisco with restaurant Heirloom Haul attached in November 2019.

The world-startling pandemic didn’t stop Cobb from expanding her brand to Fort Worth at the Stockyards, where she opened another Flea Style in October 2021, along with a souvenir and convenience store at Hotel Drover called Wide Brim. She recently opened a bungalow in Fort Worth to use as a residence for employees, as the majority of her staff live in the Dallas area.

“There are some women in business I just call a badass. And Brittany is one of these women,” said Dave Foster, mentor to Cobb and CEO of consulting firm AvreaFoster.

“She is unstoppable,” Foster said in an email interview. “A businesswoman. A mother. A wife. A trailblazer. Tenacious. Determined. Incredible instinct.”

Despite COVID-19 hitting retail and hospitality hard, Cobb navigated through the tough times.

“It was super difficult. We never furloughed or laid off anybody,” Cobb said. “We also got very little PPP money, so that meant really buckling down and figuring out how to survive.”

Flea Style improved its online shopping platform into one that actually paid the bills by making apparel, hats and accessories easy to order for customers. In this sense, Cobb calls COVID a “hidden blessing.”

With the Frisco location opening months before the lockdown, Heirloom Haul was a saving grace because people still had to eat.

Cobb changed the business model of Heirloom Haul to satisfy customers during the height of COVID, which was a huge improvement to the overall customer experience. The spacious square footage made customers want to linger, as it was a glimpse of normalcy during such a gloomy time. The fast, casual concept of getting your food yourself on a vintage tray transitioned into a sit-down restaurant with servers.

“It kicks my butt every day,” said Cobb. “It’s my hardest business by far. One that I love, but it’s definitely what keeps me up at night.”

Cobb views her business model as a halo effect, meaning her stores connect the customer through the various concepts of events, food and shopping. All locations have event rooms to host celebrations like baby showers and birthday tea parties.

Stephanie McDonald, a longtime customer of Flea Style and Heirloom Haul, has been to two birthday tea parties with her young daughters.

“It is always precious. They do such an incredible job with the tea sets for the girls,” McDonald said in a direct message. “Their party room is the perfect atmosphere.”

With multiple retail concepts and one Heirloom Haul, retail clearly outperforms the restaurant as a whole. But in the Frisco building, Cobb says the restaurant and retail business revenues are head-to-head. Business revenues across all stores is up 600% from last year, according to Cobb. The number of employees has tripled in the last six months due to location growth and other opportunities.

However, the business faces repercussions from the ongoing pandemic, like backorders.

The Hat Bar is unique to Flea Style and an area where customers build hats with vintage pins, feathers and scarves. Stetson, a heritage Texas hat brand, partners with Flea Style and creates the exclusive ‘Brittany’ hat style with custom colors. One of the biggest challenges resulting from the pandemic is dealing with backorders of the custom Stetsons, which are stuck on cargo ships.

“Everything is just sitting on these waters right now, and it’s just tough,” said Cobb.

Depending on demand, she orders several hundred if not a few thousand hats from Stetson every month. For Flea Style, Cobb relies on her monthly flea market hunts and vendors to fill the shelves for any missing product at all of her locations.

According to the National Retail Federation, holiday sales for 2021 are expected to increase at least 8.5% over 2020 if stores can supply high-demand products and solve potential supply chain shortages.

Flea Style is still self-funded and a small business but is busting at the seams. Cobb is currently working on a new Dallas headquarters called Style Concepts with a distribution and packaging center to fulfill online orders.

The business has grown so fast that she intends for the next year to be a year of catch-up. Cobb is like her brand, ‘One-Of-A-Kind,’ and attributes this to her journalism background of meeting deadlines.

“It taught me efficiency probably better than anything else in my life,” said Cobb. “With that momentum, things keep rolling. The team gets behind you. It’s amazing how it works when you’re speedy and creative and not too worried about perfectionism.”