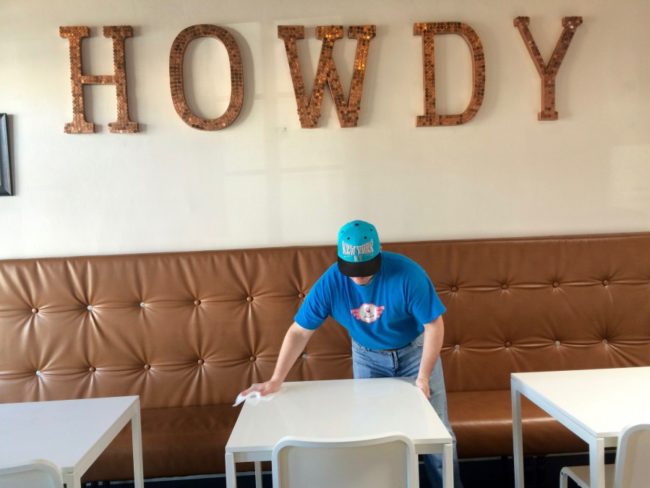 Tom Landis, owner and founder of Howdy, is trying to take the parlor’s signature flavor – the world’s only Dr Pepper Chocolate Chip – to the Texas State Fair. From there, he plans on selling it in stores across America in partnership with Dr Pepper.

“I think we share a vision of how we can use the ice cream as a vehicle to really create more jobs and I’m really excited about that,” Landis said.

The proceeds from selling the ice cream will go to creating more jobs for special needs adults.

Landis is also working out logistics to have a plant in Waxahachie, Texas make the ice cream. He says its location along I-35 will make it easy to ship the ice cream across the nation.

“I know this all sounds crazy,” Landis said, “but pretty much everything I have done with Howdy has been crazy and has come true.”

Howdy Homemade opened its doors Dec. 26 and now employs 14 adults with either Down syndrome or autism. Landis has been working with the Highland Park Transitions Program for five years, as well as several other schools in the area including Notre Dame School, originally at his two Texadelphia restaurants.

But Landis sees Howdy’s potential as much more than what he was doing with Texadelphia. After 20 years of earning an income off of sandwiches, he put his franchise on the market and is making Howdy Homemade his sole focus. Landis said he has calls every day from people interested in franchising Howdy after being open for only four months.

Landis knows his employees are capable of more than folding silverware at a restaurant or bagging groceries, and he’s not afraid to push them to get them there.

“We want to give a hand up and not a hand out,” Landis said. “We want to provide people with a sense of dignity, that they can work, they can have a job and then hopefully my employees will in turn give back to others.”

Benjamin Rubarts, an autistic 17-year-old, is graduating from Oak Hill Academy in May. He is going to learn to drive over the summer and someday wants to move to Redmund, Washington to work at the Nintendo headquarters. Rubarts has been an employee at Howdy since it opened.

“It’s been great for his verbal expression,” Cary-Elisa Rubarts, Benjamin’s mom, said. “It’s really stretched him and he’s grown a bunch. He’s learning a business, which is more than I could have hoped for.”

Working at Howdy has also been a game changer for the now vice president, Coleman Jones.

Coleman is in the HP Transitions program. He started working for Landis at one of his Texadelphia locations last fall; Landis wants to make him manager within the year and have Howdy entirely run by his special needs staff.

“I didn’t think this was in the realm of possibility,” Lendy said. “Tom Landis is over the top. He is so forward thinking and thoughtful and kind and able to change. He expects the most, and he anticipates that these kids are going to meet his expectations.”