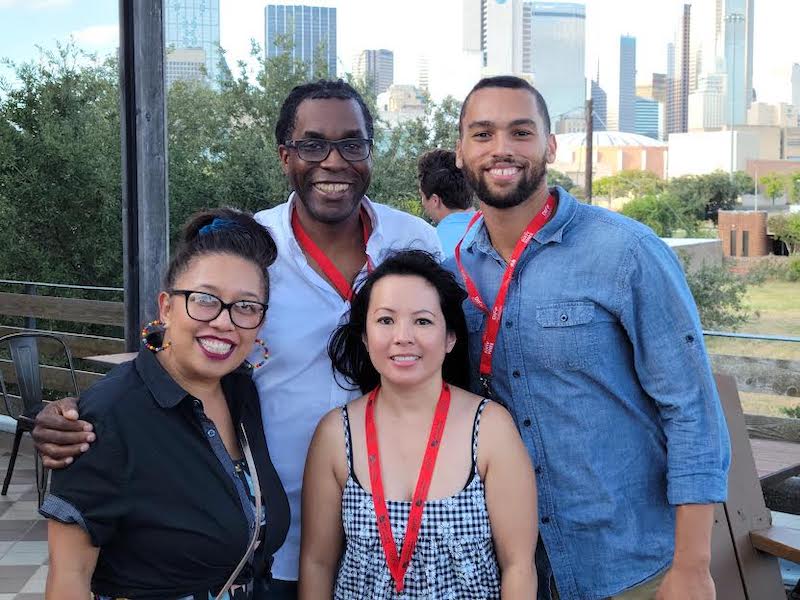 Lights dim down in the Alamo DraftHouse theater. Wafting through the aisles is the smell of buttery popcorn. Soft whispers of masked-up movie-goers rustle through the auditorium. Suddenly a loud boom of digital sound sends vibrations throughout the seats. Welcome back to the movies, it’s been a while.

The COVID-19 pandemic hit the Dallas art scene hard, causing a lot of financial damage over the past year and a half. Cinema screens went dark for almost a year. Theaters like Alamo DraftHouse were forced to close their doors and films across the world halted production.

But people didn’t stop watching movies. Forbes reported that the percentage of digital video subscribers went up 26% since 2019 accumulating a revenue of $61.8 billion in digital entertainment. Meanwhile, Dallas theaters like Alamo DraftHouse that rely on in person screenings struggled. James Faust, the artistic director of the Dallas International Film Festival has seen firsthand the impact of COVID on film in the last year.

“It was a tough year for film,” Faust said.

This year, DIFF was able to return to Dallas’ Alamo Drafthouse in The Cedars during the first weekend in October. After a year without movie festivals, organizers weren’t sure what kind of crowd to expect. The turnout, though smaller than previous years, was surprisingly large.

“The film festival was a little different this year, but we still had such a great turnout, and it was so good to see people sitting in a theater again,” Faust said.

Faust is not a newcomer to the Dallas film world. An avid film lover, he earned a bachelor’s in cinema studies from Southern Methodist University in 1997. But that wasn’t his original plan. He’d already earned a degree in 1993 from Texas Tech University.

“I did not start out in film, actually,” Faust said. “My plan was to go into radio, but then after my father passed, I realized life is too short to not do what you love and somehow everything led back to film.”

Fate led Faust to SMU where he decided to pursue a second bachelors. His time at SMU still has ripple effects on the school’s film department.

“I ended up starting the Student Filmmaker’s Association,” Faust said. “I was the vice president for the SFA, had a short film made for the SFA, and helped start the SMU film festival back in 1997.”

That film festival continues in various forms every year.

Working on shorts with the SFA, Faust was able to gain experience and learn the intricacies of producing film. But he said that starting off wasn’t easy.

“Two words: panic attack juxtaposed with anxiety attack,” he said. “I thought I knew what I was doing when I started my short film because I was one of the few people who had worked on some real shoots.” Ironically, through the process of creating his short, Faust discovered his passion was in producing and writing, instead of directing.

But the SFA was one of the most important parts of Faust’s future in film. It helped him develop the skills he needed, helping him find opportunities in the film world.

“Through my work with SFA, I came across a flyer in Umphrey Lee for some film work, assuming it was just an internship,” Faust said. “But it became my first paid gig working with Michael Bay on the set of Armageddon in the summer of 1997.”

Faust started his career working in small production roles until he found his calling: film festivals.

“I started working as an electrician on shows like Walker Texas Ranger, I worked as a production assistant with TV shows that were shooting in Texas,” Faust said. “I continued doing that until I began working with a friend on the Deep Ellum Film Festival in 1999.”

Faust initially assisted with events coordination of the now-defunct organization and never stopped working in festivals.

“That was it,” Faust said with excitement. “My first film festival was in 2000 and I have been doing that ever since.”

“I have been with the organization for a total of…15 years?” Faust said, pausing before continuing. “Yep..and I’ve been the artistic director since 2010.”

During those 15 years, Faust has traveled across the globe to other film festivals, scouting out talent and best practices.

“Pre-covid, I developed a whole team for submissions for the DIFF,” he said. “I also go to other film festivals around the country and solicit their directors and producers, looking for what we can show at the Dallas festival.”

Fast-forward to 2021, Faust’s role as artistic director has taken a bit of a detour because of the pandemic, but his job has not changed. He has continued doing the same work virtually through zoom, emails, and phone calls.

This summer, local production companies, Aviation Cinemas and Dallas Film, put together drive-ins as a substitute for attending movies in person. In June, The Oak Cliff Film Festival was able to successfully return in person for its 10th festival at the newly renovated Texas Theatre, a prominent venue for film lovers. One of the festival’s big reveals was the addition of a second screen to the 90-year-old theater.

Barak Epstein, director of the OCFF, who also works as a juror for the DIFF, says the pandemic was difficult on the arts scene in Dallas, but he took advantage of the empty theater. “With that time, we were able to work on our theater,” Epstein said. “Which helped give us time to promote and execute a film festival that we never thought would happen again.”

Over the past year, audiences have yearned to be physically present in theaters for that irreplaceable cinematic experience and Dallas’ film curators are eager to present their work to them.

“People come here to see one thing, big hair and the Dallas Cowboys,” Faust said. “But they end up realizing that there’s a lot of art which just builds into what our role is- supporting the arts in Dallas and promoting the arts in the city.”

Preserving and reshaping the arts in Dallas has been difficult since the pandemic, but the community is coming together, eager to experience everything face-to-face again.

After more than 18 months away, Faust says that he was honored to have been able to organize and present a film festival, and have attendees come enjoy it. He was one of the audience members settling into his seat at the DraftHouse earlier this month waiting for the lights to dim.

“My first time back in person, I sat down with a big thing of popcorn and just said, ‘this is great,’” he said. “This is what it’s all about.”