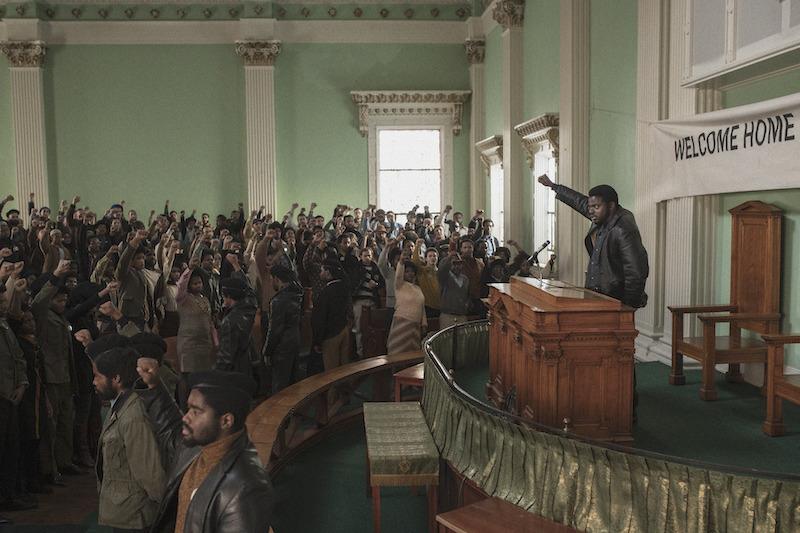 Fred Hampton was 21 when a 1969 FBI-instigated Chicago police raid shot and killed him as he slept. During Hampton’s tragically short life, the former Chairman of the Illinois Black Panthers blazed a civil rights legacy steeped in class consciousness and social progressivism. Despite his towering presence, his story has been largely erased.

“I would say that we don’t know about Chairman Fred Hampton, because if we did, America would really have to own up to things that they’ve done,” Dominique Fishback, who plays Hampton’s real-life fiancée Deborah Johnson, said in a college roundtable interview. “He didn’t drink, he didn’t smoke, he respected the women of his chapter…When a Black person is murdered, they throw up the mug shot and go down the rap sheet to try to justify something that’s not justifiable. When you look at Chairman Fred there’s no way that they can.”

Shaka King’s newest film Judas and the Black Messiah not only reclaims Hampton’s and the Black Panthers’ story, but also serves as a powerful reminder that the fight for civil rights is far from confined to history.

Viewers watch Hampton, played by Get Out star Daniel Kaluuya, through the eyes of petty thief turned conflicted FBI informant William O’Neal, played by LaKeith Stanfield. Viewers would be hard pressed to miss the echos of Hampton’s ideas in today’s racial justice and Black Lives Matter protests as well as the tragic parallels between his death and that of others like Breonna Taylor and Atatiana Jefferson.

Aesthetically, viewers are swept through the film on an intoxicating jazz soundtrack and atmospheric shots that capture the essence of 70s film. The soul of the movie is hammered home by Kaluuya, Stanfield, and Fishbacks’ diverse, powerhouse performances. Stanfield’s portrayal of O’Neal’s inner torment, Kaluuya’s embodiment of Chairman Hampton’s charisma, and Fishback’s quiet assertion of Johnson’s profound character underscore the urgency and connective power each felt for the film.

“This film articulates and shows strategies and blueprints of what a lot of people are feeling right now,” Kaluuya told The Daily Campus. “I don’t think it’s a time for hope, it’s a time for action. It’s a time for let’s get this shit done. I feel instinctively that the time for talking is done, it’s been a long, long time.”

Hampton’s fiancée, now known as Akua Njeri, and his son Fred Hampton Jr. worked closely on the film to ensure the integrity of his story and message. Despite the relatively few first-hand resources that shed light on O’Neal, who committed suicide in 1990, Stanfield masterfully portrays his conflicting loyalties between the Panthers and the FBI.

“I find a lot of things [O’Neal] did reprehensible on the surface level. But I realized that most people would not want to be locked up in prison for five years and would probably have taken the easier route if given the chance,” Stanfield said. “Chairman Fred Hampton was unique in that way, and William O’Neal might be more like the people watching it than they think.”

It would be overly simplistic to reduce O’Neal and Hampton to Judas and Messiah figures without examining the historical and social contexts that brought the two into such fateful opposition. Hampton’s heroism is as important to note as O’Neal’s desperation at 17, the age when the FBI first recruited him to inform on the Black Panthers in order to avoid prison time.

“People ain’t just born villains,” Stanfield said. “Someone made them that way. In this case, the government gave him no choice – so who’s the real villain?”

While the film balances its figures’ complex personal narratives, King still clearly conveys Hampton’s and the Black Panthers’ greater message of unity and resilience to the audience.

“It’s about understanding that it could be any of us…[Chairman Fred Hampton] was any of us,” Kaluuya said. “He was a part of a larger body. People go ‘we ain’t got a mouth, we ain’t got a mouth.’ Let’s make the body – Then the mouth presents itself.”

Judas and the Black Messiah premiers Fri. Jan 12 on HBO Max and in select theaters.