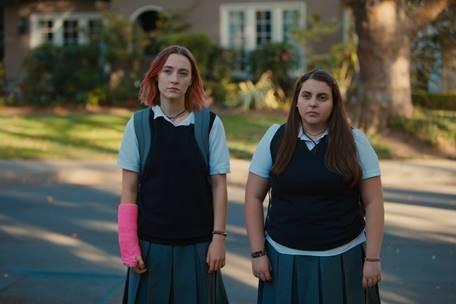 If you haven’t heard of “Lady Bird” yet, you will soon. With a record breaking Rotten Tomatoes score, director Greta Gerwig has put herself on the map in her directorial debut.

Set in early 2000’s Sacramento, “Lady Bird” chronicles the senior year of Christine “Lady Bird” McPherson, a restless 17-year-old who wants to “be where culture is” which to her means the Ivy Halls of those elusive “East Coast schools.”

The film is about mothers and daughters, what it means to be a friend, and how to say what you mean even when it feels like the most difficult thing in the world. The Daily Campus had the opportunity to participate in a roundtable conference call with director Greta Gerwig and other universities across the country.

What other coming-of-age cinema might have influenced “Lady Bird?”

Greta Gerwig: I was thinking about a lot of the different films that deal with both coming-of-age and growing up and occupying personal identity. I wanted to make a film that was both one person’s coming-of-age and another person’s letting go, and I wanted it to be as much about the adults as it was about the teenagers. In particular I guess I was thinking about the films that to me have to do with not just childhood but also memory, like Fellini’s “Amarcord” or Truffaut’s “400 Blows” — films that are both about childhood and about the loss of childhood.

How did your view on Sacramento change as you started to read the work of Joan Didion?

Gerwig: Well reading Joan Didion was transformative because it was the first time I had the experience of reading a great writer and a true artist turn her eye on a place that I was from. In a way it was both that she was a woman and that she was from Sacramento, those things were something that felt different to me. Of course I knew that there were woman writers and I knew that there were people from my part of the world, but it didn’t quite click for me until I read her writing. I think I can trace back wanting to be a writer and an artist and a creator to reading Joan’s work about California and about Sacramento specifically.

Do you think “Lady Bird” will have the same effect on people who think they live in a place of cultural insignificance?

Gerwig: I hope it does! I hope that it connects to people that who are from the cities that are less documented than a New York or L.A. or San Francisco or Chicago. Because I’m interested in those cities and those stories and those places, I think that there’s a lot of richness there, there’s a lot of things we don’t get to see. It’s what I’m always looking for when I go to the movie theater and I hope that in a way someone will watch this and feel like they can make a film about the place that they’re in and not feel like they have to leave in order to make their artistic statement.

What went into choosing the specific music from the movie’s time period?

Gerwig: Music is such an important part of what I think it means to be a teenager and how you form your identity and your taste and imagining an adult life for yourself. I was very careful about the music that I chose in the movie, because I didn’t want it to just be music from the year 2002; I wanted it to have music from the ’90s. In 2002, before the streaming and all the other stuff, and you really got your music from the radio, and people were still playing the hits from 10 years earlier or seven years earlier on the radio. That was important to me.

I would be remiss not to mention my collaborator, Jon Brion, who wrote the music for the movie and such beautiful music, the score. I wanted it to feel like it was pop music at the time that teenagers would listen to, and that it also had this old-fashioned movie score. That combination, that jutting up against each other was something that I was interested in capturing and I was so lucky that he was willing to collaborate with me on that.

And then also that all these artists gave their permission to use the music.

2017 feels like the year of the woman director. What is your take on why a coming-of-age story that’s focusing on more of the female experience would be so important, especially in 2017?

Gerwig: Well I agree with you, I feel like this year has been an amazing year for women in film, I think that the directors who’ve had film this year, whether it’s a big block buster like Patty Jenkins’ “Wonder Woman” or Angelina Jolie directed a film called “First they Killed My Father,” it’s just an extraordinary year and to be a part of that conversation is very meaningful to me.

In a way, the story is a story that is so universal. But because there’s been a lack of female creators, it’s one that’s less documented than male coming-of-age stories. I love male coming-of-age stories and I have nothing against them, but I’m always interested to see what the female version of that is. Like what is “Boyhood” but for a girl? What is “400 Blows” but for a girl? I felt that I had not seen that as much as I wanted to. I wanted to make something that was about not only a young woman, but about a mother and a family and a place.

What is it like to have a movie that is so personal to you be so well-received?

Gerwig: It’s amazing to have it be received like this, because I know how much love and care and effort every single person worked on this film put into it, and that’s from all of the cast and the crew and the production team to our distributors, A24, everyone has pulled so hard for this film and put so much into it. To get that love back is extraordinary.

Both ‘Frances Ha’ and ‘Lady Bird’ feature female relationships at the center of their plots. How do you portray these relationships realistically for all of their complexity and nuance?

Gerwig: I’ve made it a goal as a writer, and now as a director, to tell stories about women, stories in that the primary emotional relationship is one between two women. In “Frances Ha” it was between two friends, in “Mistress America” it was between two step sisters, and this movie is between a mother and a daughter.

I don’t feel pressure to tell those stories, if anything, they’re stories that are somewhat harder to get made or green-lit because they don’t have a genre. I think they’re important to tell because they’re these windows into the lives of girls and women, to steal a phrase from Alice Munro, we don’t get to see if there aren’t female writers, directors and creators.

In terms of making it realistic, I never want to turn away from the darkness, but I also don’t want to make villains ever with my characters. I don’t try to present perfect people, nor do I ever want my filmmaking to take my characters down. I want them to be allowed to be flawed and to be loved.

Both the titular characters in ‘Frances Ha’ and ‘Lady Bird’ are from your hometown of Sacramento and both left for New York. How closely do you stick to the old creative writing adage of writing what you know?

They start with some kernel that’s real and then very quickly the characters spin out and become their own people, and the events of the film have their own shape and form that’s outside of the events of my life. I think it’s more that impatience is starting from a place that’s from familiarity and letting that be the thing that allows me to invent.

Lady Bird is not directionless, but she has so many different interests. What advice do you have for other people who might feel unable to decide between so many directions in life?

Gerwig: Well I think when you’re young, when you’re 17, I don’t know that many 17-year-olds with a very clear direction. There are always the ones who are great athletes or they know exactly what they want to do, they know they wanted to be a doctor but the vast majority of 17-year-olds are figuring it out. I don’t think that’s an indication that they’re never going to do anything. I think that’s an indication of being open and curious and looking for what the thing will be.

This is something another writer said, Elizabeth Gilbert, you always are gonna be okay if you just follow your curiosity. Sometimes people say follow your passion, but she says that’s a very difficult thing to do; what if you don’t have a passion? That’s a very tall order. But if you follow your curiosity the worst thing that could happen is you live a life investigating your curiosities and even if you never find a passion it doesn’t mean you haven’t had a very interesting life.

All these characters felt like people I knew, people I would go to class with and I would hear talking to me. What was your process with writing that type of dialogue?

So much of the scenes with Lady Bird and her mom, what her mom wants to tell her is “I’m so scared,” and she can’t say that because it’s hard to say what you’re actually feeling particularly when what you’re feeling is fear. So you say some other things, you say “your room’s not picked up,” you fixate on something else.

So much of who I am as a writer is a person who likes to listen. One of the things that’s great about New York is that you’re always in this circumstance where it’s very easy to listen to people talk. Mostly people use language to not say what they mean at all. And I’m always fascinated by that. One of the reasons for me that the ending is so moving is that Lady Bird is finally able to use her language to say what she means and she means “thank you,” and she says “thank you.”