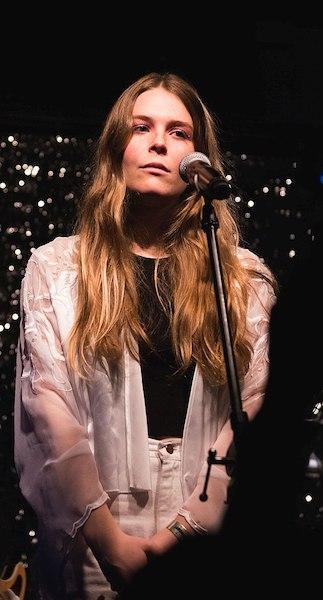 You’ve heard the name. You’ve seen the video. She’s the girl who brought Pharrell Williams to tears. From Easton, Maryland, she is… Maggie Rogers.

Her look and sound are reminiscent of an early Florence Welch, mirroring the indie-pop aesthetic that finds mainstream success. Rogers is rarely seen without a middle part and flared pants. She danced in tie-dye on The Ellen Show, sang in silk on SNL and crooned on Current Mood with John Mayer.

Maggie Rogers, now 24, graduated from the esteemed New York University’s Tisch School of the Arts. Released in January 2019, Heard it in a Past Life comes as Rogers’ first album with a major label.

.@MaggieRogers' 'Heard It in a Past Life' debuts at No. 1 on Alternative Albums chart https://t.co/kIP0Xcb0Pk pic.twitter.com/bc2GXkcuCf

There’s something about Maggie Rogers that is captivating. Maybe it’s the freckles. Or, perhaps it’s the way she pours her soul into her lyrics, such as in the single “Light On”:

“Oh, if you keep reaching out/ Then I’ll keep coming back/ And if you’re gone for good/ Then I’m okay with that.”

Rogers finds success on the track “Give a Little,” especially with the music video’s inclusion of former NYU classmate Camila Mendes. The song itself feels folky yet modern with techno undertones. In the video, she wears white knee-high cowboy boots with red athletic shorts and dances freely in a skate park. Conceptually, the video fits the indie genre.

Rogers has been open about her journey into the spotlight. This album comes as a response to her rising success, one example being the track “Overnight.”

In addition, media companies have taken advantage of her success story, running headlines such as “Maggie Rogers, Plucked from Obscurity Is Coming Confidently into her Own” or “Maggie Rogers Reflects on Sudden Rise to Fame on ‘Light On'” to highlight her rapid rise to fame.

Judging from her presence on social media, she seems to have embraced the attention as well.

im weepy + overwhelmed + processing + celebrating + don’t totally have all the words yet to express the sheer amount of pure joy i feel running through my body and out into the world today. i am BEAMING and exploding with so much light and love. this record belongs to you now. ? pic.twitter.com/bMHgx69F3t

The album plays like a continuous lullaby with no true distinction between songs. This can be interpreted in every direction, but I found it particularly soothing for a Sunday drive, though not quite strong enough for a long run.

Rogers is clearly doing something right with a sold-out US tour and a European leg that is headed in that direction. Whatever it may be that has drawn listeners to Maggie Rogers, her sound has resonated well with a generation of disruptors. And Rogers, whose first EP was recorded in a makeshift studio in a broom closet, is exactly that.

The Daily Campus welcomes opinion contributions from students, faculty, and staff. Submissions should be no more than1000 words and are subject to editing. Please email submissions to smagalio@smu.edu. Submissions must include your SMU ID and a cell phone number for verification.