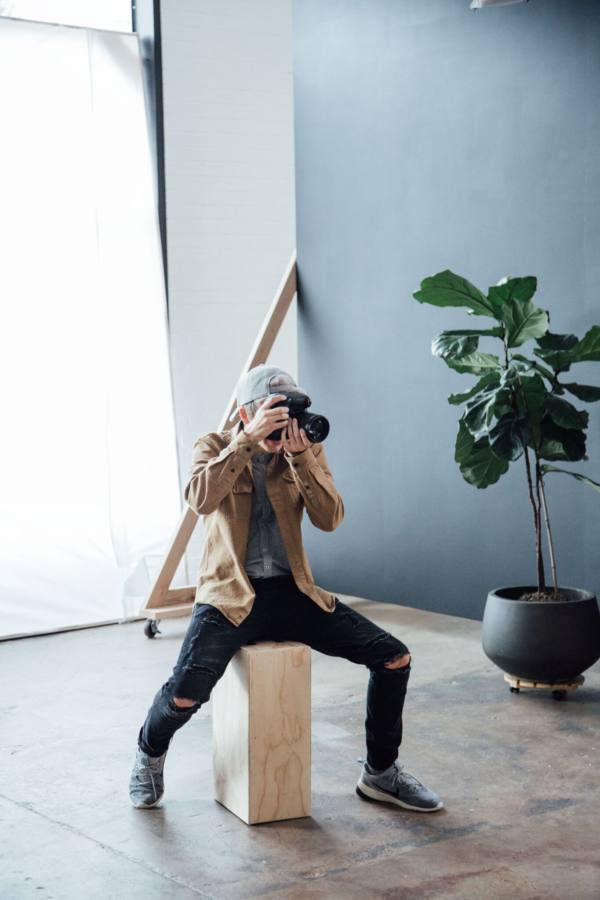 “Are you okay if I move this hair?” he asked her. He always asks.

Even though he’s a photographer and she’s the model, he asks. This is the post #MeToo fashion industry. This explosion of voices calling for equality has shaken the world, calling down bad men in high places.

So what are we left with?

What happens to the men still standing? The good ones?

Nick Glover sits on the couch at his parents’ home petting his dog. He looks like your typical college student– baseball cap, grey t-shirt. Except he’s sitting on his mom’s couch with the 2018 September issue of Vogue, staring at his name in it. One of his photos had made it on an advertisement in the regional copies of the Beyoncé issue. His goal was to have editorial work published in Vogue before 30, but this came pretty close.

Glover is 22 and just breaking into the fashion industry. He’s not even studying fashion at UTD. He just loves it. He’s traveled the world working photo shoots for various magazines. And he’s really good at it.

But Nick wants to be different.

“In this industry there’s always that creepy stereotype of the creepy male photographer. And that was the one thing I never wanted to become,” said Glover. “You never want to be the creepy guy with the camera.”

On shoots, Glover has learned to be respectful. If he ever has to even so much as move a hair on a model while he’s shooting, he’ll ask her first.

“You always ask permission. I try to never touch the model. I try to never be in their personal space. I always try, if she’s getting changed outside I always turn away. I ask, ‘Are you done?’” said Glover. “It’s a respect thing. Because it’s like, especially for younger models they don’t normally stand up for themselves as well, so you always want to be aware of that and respectful.”

A lot of Nick’s best friends are models. “I hear a lot about what goes on on set that they don’t tell anybody. And it’s horrific and would never happen in any other industry except the entertainment and fashion industry,” said Glover.

Names like Mario Testino and Bruce Webber, some of the biggest photographers in the fashion industry, have been accused as sexual harassers by the #MeToo movement.

“It was general practice to give a model a heads-up about a specific photographer who we knew had a certain reputation,” Gene Krogan told the New York Times. But, he said, “If you said you were not going to work with someone like Bruce Weber or Mario Testino, you might as well just pack it in and go work in another industry.”

But finally, things are finally starting to change in the fashion industry.

“The ‘me too’ movement has exposed abuses of power that have existed in the workplace for centuries, and I hope that we’re now seeing the beginning of the end of that type of behavior. It appears that some magazines and modeling agencies are implementing new guidelines that protect everyone on a fashion set. It’s long overdue,” said Robert Hart, a photojournalism professor at SMU and photographer.

“It appears that some magazines and modeling agencies are implementing new guidelines that protect everyone on a fashion set. It’s long overdue.”

In an article in the New York Times called “Modeling in the #TimesUp Era,” Vanessa Friedman writes, “For the first time it encouraged fashion houses to, among other things, create private changing areas, the better to guard against models being effectively naked in front of the many makeup artists, hairstylists, photographers, journalists and other random people who work behind the scenes of a show, where the making-of aspect has become as public as the event itself.”

We don’t have to explain the need for justice when it comes to sexual harassment. But what happens to, dare we even say it, the innocent man? The good ones? There’s talks of men in various industries being afraid of the #MeToo movement. Men everywhere are saying they’re terrified of being falsely accused. But are men really the victims here?

“There are few things more dangerous than a man whose confusion leads to fear, which ultimately leads to anger,” writes Zaron Burnett III in “A Gentleman’s Guide to the #MeToo Era” on Medium.“Right now many men are confused. Some are downright scared. Many believe that women wield a new form of power. Some of these same men accuse women of conducting a witch hunt. They claim they must contend with life-altering misinterpretations and career-ruining false allegations.”

In an interview with GQ Australia, Superman actor Henry Cavill said, “because I’m someone in the public eye, and if I go and flirt with someone, then who knows what’s going to happen? Now? Now you really can’t pursue someone further than, ‘No’. It’s like, ‘OK, cool’. But then there’s the, ‘Oh why’d you give up?’ And it’s like, ‘Well, because I didn’t want to go to jail?’”

In his article, Burnett points to some quotes by Cavill, asking, “Why is Superman afraid of being called a rapist? Are false sexual assault allegations the new kryptonite? Not exactly… Those who claim the #MeToo Movement has gone too far, that it’s morphed into a witch hunt, are focusing on the wrong aspects of sexual abuse. The #MeToo Movement has one simple aim: Make the world safer for women by ensuring women are free from sexual harassment, abuse, assault, and rape. This goal can’t go ‘too far.’”

Early this summer, Glamour and GQ came together to ask 1, 147 men what they thought of the #MeTooo movement. The study revealed that there was a severe lack of knowledge about the movement.

The editors of Glamour reported, “About half of this younger age group said they’re worried about being wrongly accused of sexual harassment in the workplace. But the group who had heard of #MeToo were less worried, which says to me the movement is helpful in both promoting awareness and modifying behavior.”

But how does this affect the men actually working in entertainment and fashion industries?

“For me personally I don’t think it changes anything,” said Glover. “If anything, and I don’t want to sound conceited, but if anything it makes my reputation better. Because every model I speak to says, ‘You’re respectful, you’re so nice on set, and you make us very comfortable.’ And I like hearing that. Because it makes me feel like they’re happy doing their job and they’re not worrying about what if he touches me in the wrong way or what if he’s peeking in or what if he makes me do something. I never try to do that.”

Jenny Davis, a stylist that has worked with Nick many times, can attest to that. “Nick is the ultimate professional, on and off the set. He treats everyone with respect, regardless of gender, race or sexual identity,” said Davis. Huh. That’s a thought.

Other photographers working in the fashion industry are all for the #MeToo movement.

“I’ve always felt that my professionalism is indicative of who I am both at work and in my personal life so my behavior hasn’t changed,” says Hart. “I think it puts everyone, not just men, on notice that abusive, predatory behavior won’t be tolerated. I believe that predatory, coercive behavior is not just unethical, it’s despicable. There’s no room for that behavior in any setting. ‘Me too’ has driven a stake in the ground that says, ‘From this point forward, this behavior is career-ending.’”

“There hasn’t been a job where I’ve worked on location where a male bystander hasn’t hit on or aggressively cat called,” says Holtrichter. “Growing up a male in the country side you really become oblivious to the daily shit woman have to grow through, and if men need to be a little cautious – good! It’s about time… It’s as simple as being a good human, so I really don’t have any empathy with men that seem attacked by this movement.”

“I think fear might actually be a good thing,” said the editors of GQ.

Glover echoes this. “I think men in this industry need to learn how to better respect people,” he says. “And I don’t think that’s a problem.”