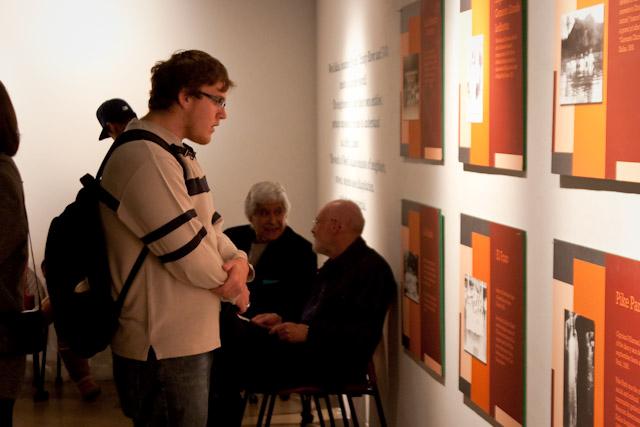 West Dallas: It’s less than a 10 minute drive, 5 miles away and yet for many it feels like a completely different world.

West Dallas is the distinct community across the Trinity River composed of mostly Hispanics and African Americans and host to distinctive history and culture.

To most SMU students, this area might as well be a foreign country. But not to this year’s Meadows Scholars.

The class, which consists of 17 students from every discipline in the Meadows school, produced the exhibit in conjunction with the Dallas Mexican American Historical League and the West Dallas Community Centers.

“I felt it was very important for the class to be grounded in something quite particular with a particular history,” Bergman-Carton said.

The result of that philosophy was an exhibit Monday night at the Bataan Center in West Dallas and a show at Meadows’ own Doolin Gallery in the Owens Arts Center Thursday night.

The project started with the simple idea of using participatory art to communicate a sense of place. But beyond that, nobody really knew what it would turn into.

“I always describe this class as a happy accident,” Bergman-Carton said.

“It’s a big experiment, which is what I like—I like being a littleuneasy,” co-instructor Celia Munoz said.

And as Munoz said, “The students were probably initially bewildered.”

In preparation for the exhibit, the Meadows Scholars studied a myriad of 20th century participatory and public art, looking specifically at art with social context. Students heard from a variety of guest speakers and conducted photo-essays on-site in West Dallas.

Participatory art is “a work of art that anybody can participate with, an art that doesn’t require complex cameras or huge stages,” Meadows Scholar Jackson McMartin, a film and media studies major, said.

Students spent the whole semester working in groups that utilized the different skill sets of the different disciplines: instillation, performance, reporting and archiving.

The instillation used photos displaying West Dallas history and street signs of neighborhood names. The walls were covered with text narratives describing life in the barrios and paintings of the new Santiago Calatrava bridge, an emblem of West Dallas’ future.

In addition to the instillation, a performance group composed of mostly dancers and musicians used choreography and music composition to artistically “map” the many paths of the people in West Dallas.

“The music was complex, and the dance work was abstract, and none were easily accessible,” Zarazaga said.

The exhibit at Bataan integrated art and performances by local kids who were taught by SMU theatre student Josh Kumler and SMU artist-in-residence Bernardo Diaz.

Both the performance and arts components built on work by a reporting and archiving team composed of journalism and communication studies majors. This group collected and filmed oral histories with community leaders and elders.

“The rich, history-filled words and stories shared by the elders act as fuel for the creative fires of the other students, who take the information we gather and interpret it into something beautiful,” Marc Bullard, a communication studies major, said.

“People want to share with you and a simple question can open up a treasure trove of information and emotion,” journalism major Meredith Carey said.

There was only a slight difference between the West Dallas and SMU showings of the project.

“Although the event at Bataan did its job in bringing the basic installation to West Dallas, I feel that the installation at Doolin [was] a much more comprehensive look at the history of Mexican Americans in Dallas,” McMartin said.

All parties involved call the exhibit and process successful.

“The instillation turned out much better than I expected,” McMartin said.

“There was an open generosity of spirit for the whole event,” Zarazaga said. “Students, staff, kids, teachers, guests and community — all were slightly curious, and interested and open to listening and looking.”

DMAHL Vice President Albert Valtierra is impressed with how the partnership with Meadows turned out.

“I was concerned that there would be some disconnect due to the socioeconomic difference, but that doesn’t seem to be so,” Valtierra said.

“I’m thrilled that the students in the class seem genuinely excited about the project and about the class itself,” he said. “I came in not knowing what to expect, but it was a great performance.”

This exhibit is the first part of what promises to be a long partnership between DMAHL and SMU’s Meadows School of the Arts.

“The project is a first step in so many different ambitions,” Zarazaga, who has received funding to continue work in West Dallas, said.

And Bergman-Carton will teach the Meadows Scholars class again next year.

“This is my 21st year of teaching at SMU and this is the most important course I have taught,” Bergman-Carton said.

The production was not without its difficulties, but the students are glad to have taken the project on.

“If I knew beforehand that it was going to be a huge time commitment, I probably wouldn’t have [taken the course], just because I’m so busy with rehearsals.” Kaycee Morganto, a musicand engineering double-major, said. “But you can’t put the rewards that this class had on paper.”