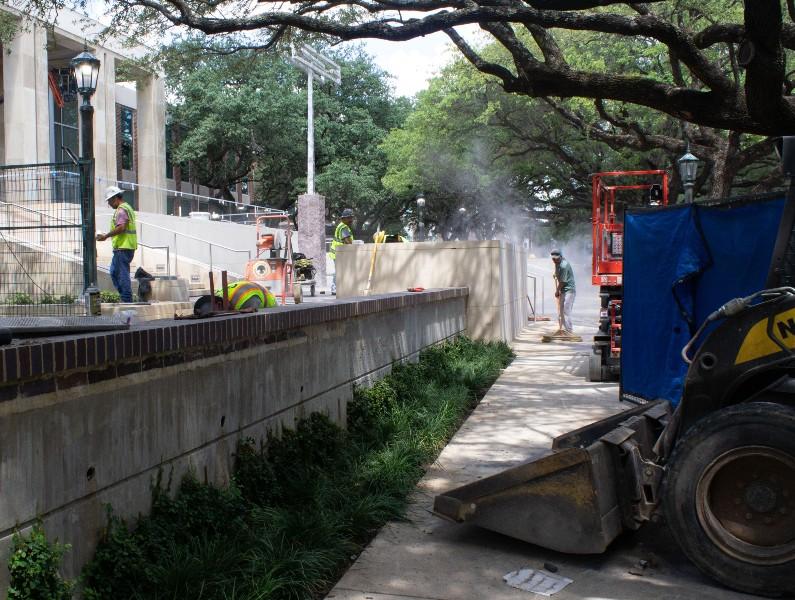 Since 2019, the home of Meadows art students underwent extensive remodeling. Meadow School of the Arts hosted a dedication ceremony celebrating its completed renovation on September 16.

“It is a celebration of gratitude for the donors who made it possible,” Dean Sam Holland said before the ceremony.

The building, which has not been renovated since the 1960s, will now be a place where students can find inspiration. Dean Holland described the transformation as “miraculous,” and it is a far cry from the enclosed, dark spaces that art students occupied in the past.

However, Dean Holland compared the construction process to a “nightmare” for students to study through but explained that there was no other option.

“To move the Cox school out, they just need classrooms,” Dean Holland said. “But we would need studios and concert halls and galleries.”

The construction began in November 2019 with an initiative of $34 million, and goals to improve the northern wing and open up the entrances. The project took longer than expected, due to delays in construction from weather, supply chain problems, and restrictions due to COVID-19. This became hard for students to navigate the building and appreciate the space.

“It was a frustration because it felt like art went on the back burner,” Lauren Secrest, theater studies major said. “It’s been so long since I’ve been in the Garson theater.

“I like how they modernized it without changing the actual structure, so it still has that historical quality to it,” said Vinita Dixit, theater studies major.

New plazas and promenades lead to the Grand Atrium with towering ceilings and a customized Italian-crafted chandelier. The atrium invites students and visitors to gather in its modern and spacious area. Further into the building, new high-tech classrooms and galleries hold promises to advance and inspire students’ studies. The Meadows Foundation Gallery, which originally held the Meadows Museum, has been transformed into a classically inspired space. It is one of true elegance and beauty similar to the artwork that is displayed in the area.

“I like having a new building and knowing that I am now in a space with more advancements,” said Alexandra Lahiri, a freshman studying music.

The renovations were not only necessary for aesthetic reasons, but there were also serious problems with the building itself.

“We were in an aging and deteriorating facility that just wasn’t providing the environment and tools for the artists, makers and creators,” Dean Holland said.

Removing asbestos and mold in the wall in addition to making the structure more stable was essential in the remodel.

“The building also got cleaned up and that was important because this building is so old,” Dixit said. “There was mold in almost all of our classrooms.”

The years of construction and continued pushback of the finish date created a lot of stress for students. For many, they had to walk on the street to get to class and enter in one small entrance located at an inconvenient and hard to find spot.

But all this work seems to have been worth it when students walk through the new entrance. The modern style and bright space inspire students and they are glad that their school of art finally looks like one.

“I am finally able to have that Meadows experience when I walk through the front doors,” Secrest said. “It was hard to have Meadows’ pride when that blue wall was up.” (20)

However, work is still not done in the Meadows. Dean Holland said stray construction workers will continue tweaking small things around the building.

As of now, visual art students will mostly reap the benefits of this renovation. However, there is a plan in the next three to five years to continue construction on the performing arts section. The only performing arts space that was renovated was the Garson Theatre, which will be open to students next semester.