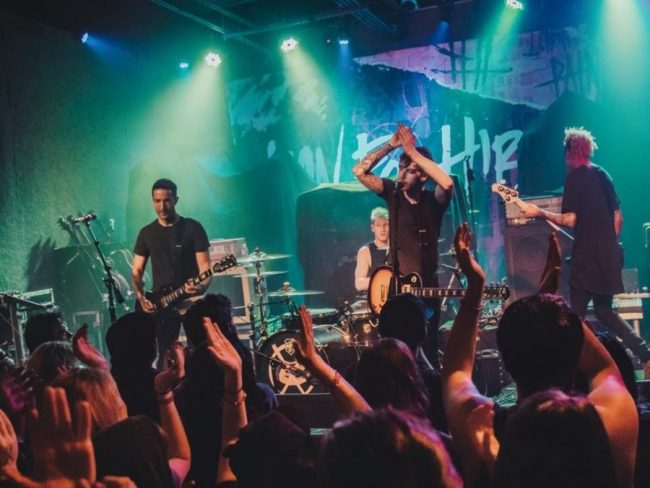 New England pop-punk quartet Makeout just went through Dallas on its first headlining tour. The group recently shared the stage with Blink-182 and is now the star of its own show with the Turn Your Pain into Art Tour. The quartet made its way to the Prophet Bar in February for a rocking show. Leader singer and guitarist Sam Boxold answered some questions from The Daily Campus about the band.

Daily Campus: I saw you just finished your first headlining tour. What was that experience like?

Sam Boxold: We were all pretty surprised at how many people were coming out to see us. It was an awesome experience.

DC: What was different about those shows rather than others?

SB: Having the headlining shows meant we could spend more time showing who we are. We had time to pull out an acoustic to bring the dynamic down, and also the opportunity to pour balloons on the crowds.

SB: That was a dream, I’m pretty sure.

DC: Did you get an inspiration from them or vice versa?

SB: Haha yeah, Blink totally came after MAKEOUT. Seriously though, they’re a huge inspiration to me and the band. They’re the staple to pop punk.

DC: How are you gearing up for the new tour?

SB: Things are going well so far. We had a couple snags of illness, but now that’s passing and we’re falling into a closer routine feel. Super stoked for the rest! Icon for Hire has been slaying every night.

DC: Is there anywhere you’re looking forward to?

SB: Like the whole country. I haven’t seen most of it in a while. But I’m extra excited for Seattle.

DC: How would you describe your shows to someone that’s unfamiliar with your music?

DC: How did you decide on the band name?

SB: I wanted to kiss Tyler, and he said, “No, let’s make out.” I slapped him and called him a genius.

DC: If you had any tips for aspiring artists out there, what would they be?

SB: You got to get out there and make yourself heard if you want to do it. It’s the most satisfying part to play in front of new faces, and you’ll grow so much in your art by showcasing yourself. It could be anything — karaoke night at a bar or a school talent contest. Show your stuff!