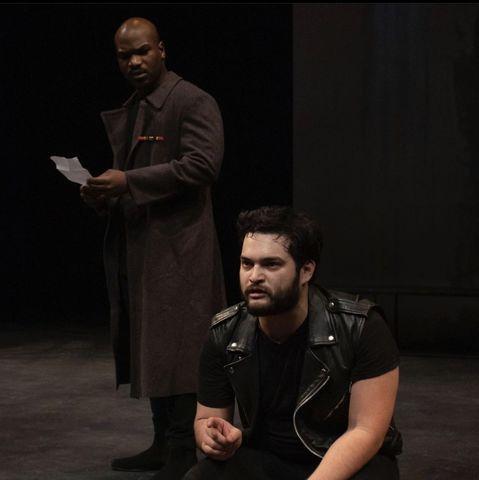 “The most exciting part about playing Hamlet has been exploring all of the different possibilities in action that Hamlet takes throughout the show,” Campbell said.

In addition to the sulking lord, Campbell played Hamlet’s father’s ghost and his Uncle Claudius, the murderous king.

“The reason that Shakespeare shows are constantly done and everywhere around the world, is because they still resonate with audiences today,” Campbell said. “I think our take on the production is definitely unique, and we’ve been very lucky to have been guided by our director, Michael Connolly. He’s a master of Shakespeare.”

Each performance of Hamlet was specific to the actor. A black leather jacket and a gold medallion were used to signal who was playing the title character.

Galen Sato, who played Horatio in earlier scenes and Hamlet in the climatic duel, said embodying the character was difficult for him at times.

“The most challenging part of playing Hamlet [for me] was two-fold: being the final Hamlet and dying at the end,” Sato said. “Hamlet’s journey is partially based on the accumulation of events, and so with being the final Hamlet, I have to be aware and feel everything that the first two Hamlets went through so that I can get to an authentic place for the last three scenes.”

To play a role like Hamlet is one of theater’s greatest challenges, especially making sure the character’s portrayal is true to the text of Shakespeare.

“Playing Hamlet has been trying to identify his inner turmoil, and how to make it my own,” Campbell said. “Hamlet as a character has so much more turmoil and anxiety in his life than I do. So, finding my way through his soliloquies and unpacking all of that information has been the most difficult part.”

In several moments throughout the play, the audience fell silent, seemingly in awe of the interpretation of anger in Hamlet’s character.

“It was silencing at times seeing how well the actors portrayed Hamlet’s anger, especially the scene where he attacks Ophelia,” audience member Christina Akhavan said. “It stunned me, it stunned the audience.”

Lauren Floyd, the only female out of six actors, worked hard to make sure her roles as Ophelia, Gertrude and Max stood out. Floyd, who starred in the Diary of Anne Frank late last year, said playing Ophelia in Hamlet was the most challenging role she has had to take on.

“Initially, I felt a little intimidated as both the only woman and undergrad in the room. Honestly, more so from being the only undergrad, but thankfully, we worked as an ensemble to create an open, safe rehearsal space,” Floyd said. “I had a lot of agency in expressing my experiences as a woman, as well as in developing these strong female characters. I wanted to make sure that I was representing these women honestly, not falling into caricatures.”

The play concludes with a duel in which all the actors are onstage at once. Neil Redfield, who played the first Hamlet and later Laertes, says the fight choreography by Professor Sara Romersberger in the final scene was exciting to perform.

“As part of the Acting MFA program, we train in basic fight combat so that we know the fundamentals for when we have to perform fights like this. All in all, it took a lot of work, the process was very smooth, and we all felt great about the end result,” Redfield said. “I can say confidently that it’s the most exciting fight choreography I’ve ever gotten to perform.”

With guidance from their director, Michael Connolly, these talented SMU Meadows students took the stage and used the classic writings of Shakespeare to address present day issues.

“For me, this show is about toxic masculinity and how Hamlet is constantly trying to live up to this ‘idea’ of being a ‘man,’” Sato said. “That conversation is very present in our culture right now.”