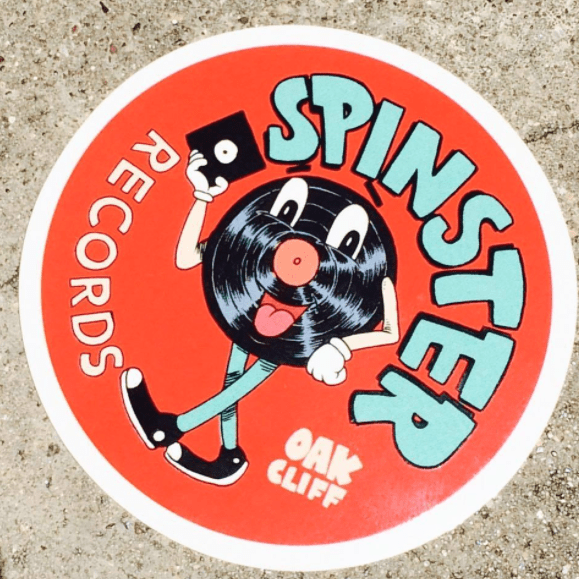 When David Grover opened vinyl-exclusive record store Spinster Records two years ago, he saw the potential of the revitalized neighborhood of Bishop Arts. It reminds him of his former home in an area east of Hollywood called Echo Park, but “maybe 10 years behind,” in vinyl record stores. Besides Off the Record, Spinster Records is the only other all-vinyl record store in Dallas. Grover considers this part of the city his new home.

“I really like this area a lot. It’s home,” Grover said while looking out his window. “And the cool thing about Dallas is you can live here, get a house, and there’s lots of work.”

The Bishop Arts neighborhood, particularly the intersection of Tyler and Davis St. where Spinster sits, has transitioned from an area of desolate storefronts to a thriving strip for local businesses over the past decade. It’s a place where investors buy and flip entire blocks in order to attract local shops and businesses, resulting in a newfound spot for tourism and new home buyers.

Grover said that it was the character of Bishop Arts that made him choose this area over Lower Greenville or Deep Ellum, both well-known areas for music and bars.

“I came down to Davis St. and went to Bolsa Mercado,” Grover said. “A pretty young lady with leg tattoos was serving and told me about what was going on in the area.”

That was when Grover knew this was the spot to finally start his vinyl record store business. He says it was more his speed.

He has watched the area grow exponentially in just the past two years while Spinster has been open, not only with new shops, but with an influx of people as well.

“Before it was one or two people saying they just moved to Oak Cliff in a weekend,” he said. “Now it’s 10 or 12 people a weekend.”

Grover was once one of those new people to the area only five years ago when his then-fiancé got a career opportunity in Dallas. He remembered the livelihood of Deep Ellum from when he was on tour with one of the bands he was in as a California-based musician, so the idea of moving wasn’t tough for Grover. After he moved here, he realized Spinster Records fit more along the lines of Bishop Arts. He almost decided to open his business in California, but plans changed and he gladly adapted.

It took “six good years” of planning before Spinster Records finally opened on a block of Davis St. that he shares with Joy Macarons, Davis Street Espresso, Set + Co and a number of other shops. Grover said that is appreciative of the local business community.

“You have the people from Wild Detectives, Barak from Texas Theater, Jeff Liles and Edwin at the Kessler,” Grover said, launching into an even longer list of neighborhood advocates and business owners.

It is clear that Grover is grateful for people who are also local business owners of Bishop Arts or at least supporters of the area. He has accepted the gentrification, but he’s grateful for the people who know the history.

“Everyone wants ‘new and shiny’ for so long,” Grover said. “And that’s why it’s taking Texas longer to recognize the history.”

Grover’s shop has quickly become a neighborhood go-to for the unique vinyl finds or audio equipment as well as the small-scale concerts he throws in the space. The store is stocked with both new releases and older, classic albums.

“I just wanted to connect people,” Grover said. “Music for me was always a time where people connected together, and I thought it was really magical.”