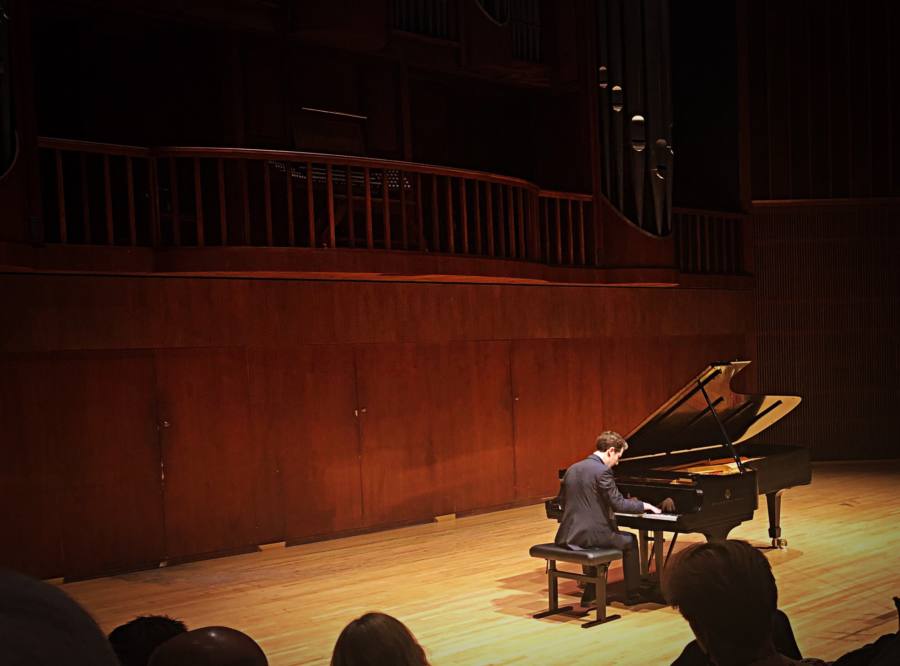 Bax played for students, alumni, faculty, and others who came to experience a musical tour through Italy on Saturday, Feb. 23. The recital concluded with a unique encore not listed on the program—a piece he played only with the left hand.

“A lot of people will come out and play an encore, just some really hard thing,” sophomore Music Performance major and percussionist Jacob Hord said. “He’s kind of just did something different, just plays it with the left hand, which was very cool and just beautiful.”

Bax’s program focused on classical music by Italian composers or those who were inspired by the country’s rich culture and beauty. Bax introduced the program to his audience with Bach’s arrangement of a work by Italian composer Alessandro Marcello.

“The first piece was originally an Italian piece that Johann Sebastian Bach really loved and decided to transcribe from the original version that’s for oboe and orchestra for the keyboard,” Bax said.

Bach’s work flowed seamlessly into the second composition, an elaborate and intense piece by composer Sergei Rachmaninoff, who combined elements of Italian romanticism with his own Russian roots.

“It’s the same key and same kind of mood,” Bax said. “But then very quickly, Rachmaninoff makes it his own, and it becomes very romantic and very Russian. And it’s probably one of the most powerful pieces he wrote because it’s his last piano piece.”

“And it’s probably one of the most powerful pieces he wrote because it’s his last piano piece.”

The Rachmaninoff composition reached such intensity at times that the lid of the piano shook as Bax performed. The tone of the performance shifted from intensity to intrigue when Bax played a more modern composition by Luigi Dallapiccola. The 20th-century composer would create music in an experimental and mathematical way, yet still make it emotional and human.

“He manages to make it incredibly beautiful and touching, and very, very special,” Bax said.

The final masterpiece ended the program with flair and drama. The piece was written by composer and pianist Franz Liszt and is based off The Divine Comedy, a vivid epic poem by Italian writer Dante Alighieri.

“It’s a 14-minute, really thrilling ride through hell, purgatory, and heaven, and back and forth,” Bax said. “It’s quite passionate. It’s really exciting.”

The Italian pianist’s enthusiasm for the piece was evident when he sometimes rose from his seat while playing Liszt’s work. Audience member Jacob Hord noted that Bax’s performance of Liszt made a big impression.

“I think the Liszt probably stood out the most,” Hord said. “It’s a good one to end with.”

Bax said he believes classical music will continue to be relevant as young musicians interpret it and recreate it in their performances.

“As long as music is respected, is done well, I think it’ll just keep on living,” Bax said.