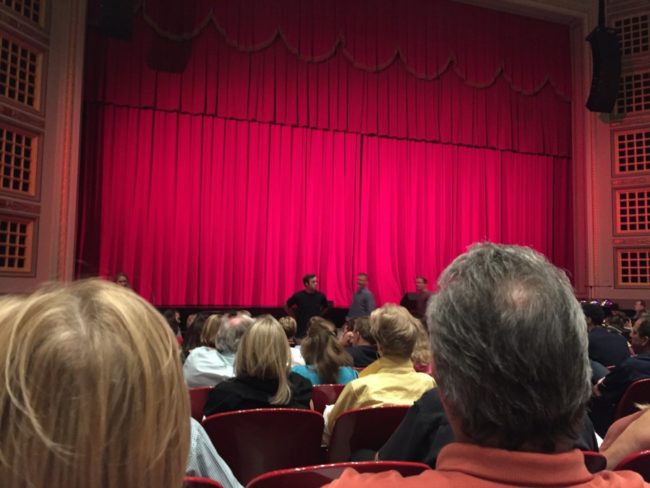 Five groups were selected to perform in this year’s Sing Song. They featured students from many Greek organizations on campus who had written, directed and choreographed their routines to the best of their ability.

Program Council’s 2016 Sing Song chair, Sam Weber, explained that they chose only five groups in order to allow them to fully develop their story lines and thicken the plots of their stories. In fact, he said the reason he chose the theme of “Stories” or twisted fairytales was to give groups a set plot to work their show around, whereas in years past it has been based more around types of music. 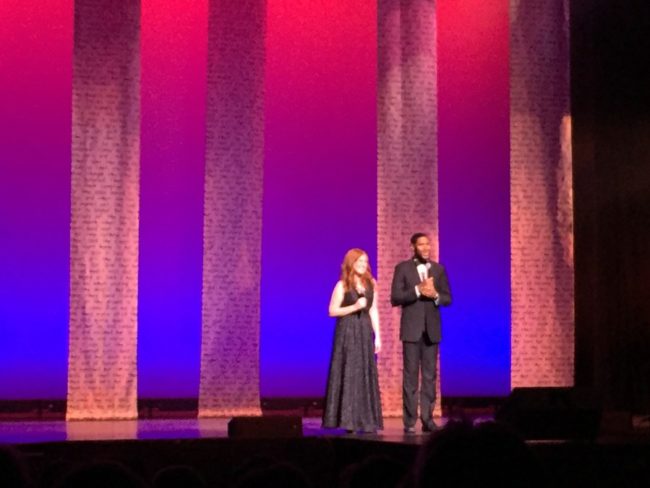 To kick off the festivities, the emcees for the night were Molly O’Connor and D’Marquis Allen. Both were dressed to the nines and kept the audience entertained in between each story with jokes and little skits of their own about the story the audience had just seen.

Kicking off the night was Chi Omega and Beta Theta Pi telling their twist on the classic “Cinderella.” Lead actress in the story, Michelle Campbell, definitely looked the part of Cinderella, but she needed the help of some friendly mice (in this case, people backstage) when her microphone went silent during the first song. The group recovered well, though, and gave Cinderella a more Texas-themed twist, including the evil step mother’s attempt to buy “Home Barn” and Cinderella losing her cowboy boots instead of glass slippers.

Up next were Kappa Alpha Theta and Sigma Phi Epsilon with their twist on Snow White. For this skit, the group decided to start after the “happily ever after” and show how things weren’t quite all smiles and singing birds. Perhaps the most ingenious part of this skit was when Prince Charming decided to get the Seven Dwarves out of his hair by finding female dwarves for them, including Ditzy for Dopey and Dozey for Sleepy. 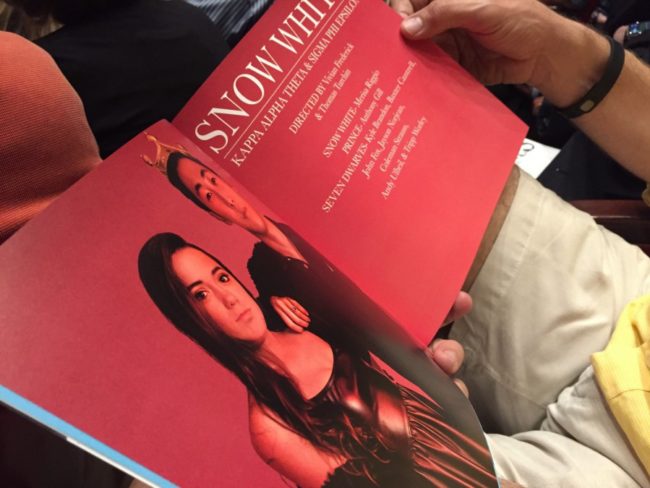 Third in the lineup were Tri Delta and Sigma Chi performing their spin on Rapunzel. To twist their story, the group made Rapunzel, played by Gabby Davé, the best rock guitar player in the land who had been trapped by the evil witch who forced her to play only jazz music. At the king’s insistence, thief Flynn Ryder rescued Rapunzel from the Witch, but he was supposed to bring her to the king so he could keep her talents to himself. Fortunately, a rocking wizard was able to save them and they “sailed away” to Austin to play in ACL. 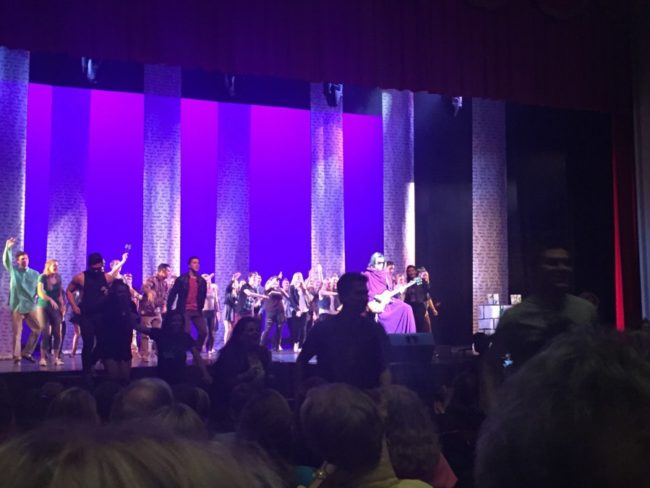 Up next, Sing Song Stories peeked into the storybook of Sleeping Beauty, and then turned the story on its head. The group, made of members from Pi Beta Phi and Kappa Alpha Order, told the tale of a male prince whom the queen’s sister cursed. Doomed to be exceedingly vain, he also had to avoid needles on his 18th birthday. However, Maleficent, played by Anna Cannon, was able to convince a lowly peasant named Aurora that pricking him with the needle would deflate his ego. Of course, once he fell asleep, Aurora realized the error of her ways and woke him with true love’s kiss, which also got rid of his inflated ego. 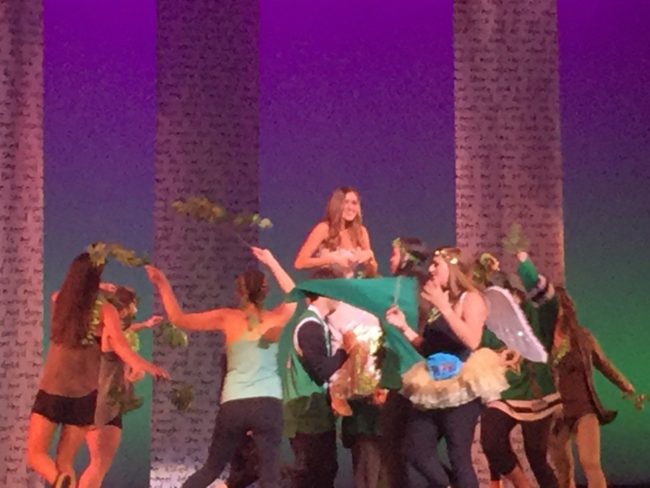 Last, but not least, was Gamma Phi Beta and Company performing their spin on Aladdin. Much like the take on Sleeping Beauty, they decided to switch up the gender of those in lead roles and gave the Genie a sinister twist. Allie, played by Kristin Kapusta, was a lowly stagehand on Broadway with her friend Jaden, when suddenly she happens upon a Genie who promises to make her wishes of being famous come true. However, fame isn’t all it’s cracked up to be, even though Allie gets to be in a staged relationship with Harry Styles. She then goes running back to Jaden in New York and is cast in the next big Broadway hit, but she gets to keep her personal life out of the spotlight. 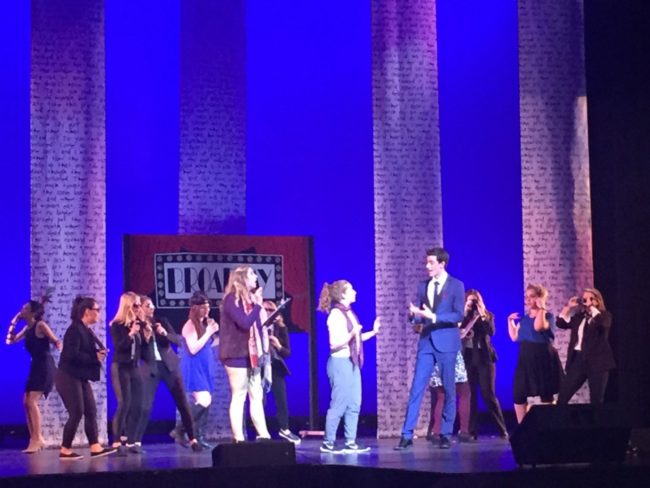 After all of the performance were over, the emcees came back out and urged everyone in the audience to vote for their favorite. While those in the audience and the three esteemed Sing Song judges deliberated their favorites, a video montage played that showed all the hard work that had gone into the performances and gave everyone a chance to see their new favorite fairytales rehearsed. 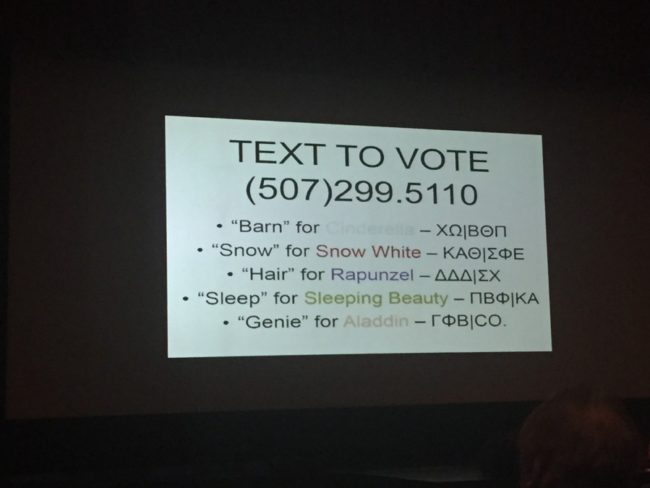 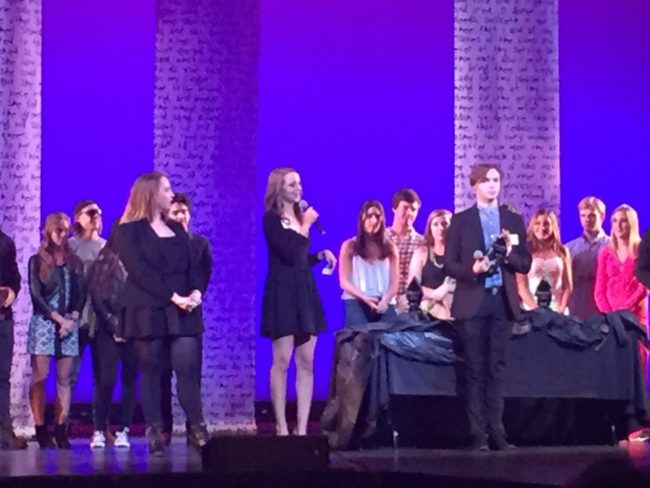 First up, Snow White received the award for outstanding achievement in ensemble. Next, the Wizard from Rapunzel won best featured male ensemble member and best featured female ensemble member went to the head fairy from Sleeping Beauty, played by Chandler Browning. Best production design and best directors went to Cinderella and best choreography went to Aladdin. Outstanding achievement in a male lead role went to Flynn from Rapunzel and outstanding achievement in a female lead went to Allie from Aladdin. For the top prizes, third place in Sing Song Stories went to Chi Omega and Beta Theta Pi with Cinderella, second place went to Gamma Phi Beta and Company with Aladdin, and finally, winning both the judges vote and the audience vote, the winners of Sing Song Stories went to Tri Delta and Sigma Chi for Rapunzel. Congratulations to all who performed!