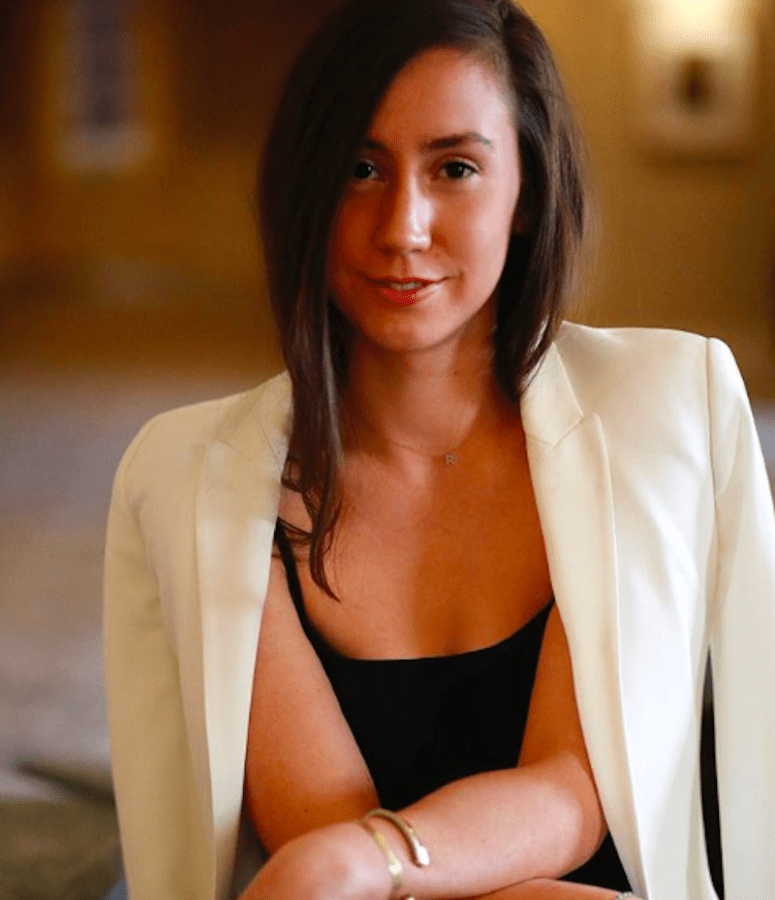 Rosie Roberson has always been herself.

She hasn’t changed who she is when she embarks on a new journey. She’s always been goofy, creative and out there. Throughout her transitions from Austin back to Dallas and from music to fashion and journalism, she learned how to be a little more refined “while not being cookie cutter.”

Roberson was born and raised in the Preston Hollow area of Dallas. Throughout high school, she expected to attend The University of Texas (UT) to pursue her dream of managing musicians, since she had inherited her passion for music from her father. She was excited to explore the artistic city of Austin and her identity.

When Roberson didn’t get accepted into UT, she decided to still leave home and venture out on her own at Austin Community College (ACC). However, she quickly realized she had a lot of soul-searching to accomplish. She had never moved from Dallas and really wanted to immerse herself in a social lifestyle, but had no real plans for her future.

Her time at ACC was spent realizing that she didn’t know which career path to choose, so she headed back home to Dallas to start over at Southern Methodist University and ditch a career in music.

“I didn’t know anyone at SMU. I didn’t know what to do now [that I was at SMU], so I thought I’d just buckle down with work,” Roberson said.

Rosie decided on a career in journalism, allowing her to meet Lisa Goodson, an administrator in the journalism school at SMU. Goodson introduced the idea of Roberson interning with Paper City Magazine.

Despite a windy path of not knowing what to do in life, Roberson finally discovered her passion for the magazine world, working at Paper City until December of her junior year; but what would be her next step?

Her internship at Paper City led her to her next step at Forty Five Ten, a clothing boutique on McKinney Ave. that had been around for years. After being bought by Tim Headington, Forty Five Ten transformed into what it is today – a successful store on Main St. in downtown. Roberson was inspired by the store’s metamorphosis, so she decided on a whim to interview to be a marketing intern only three weeks after the store established its new home on Main St.

“I thought I had no chance,” she said. “[Forty Five Ten] was the new huge thing at that time. Everyone thought that store was so cool, but then I became the [store’s] only intern.”

She had the chance to work under Nick Wooster, the men’s fashion director from New York City, when he flew into town for photoshoots for the men’s department.

Instead of describing a glamorous encounter with Wooster, she told a story about the time Wooster gave her $100 to go buy him coffee at the first photoshoot.

“I went to buy his coffee with the money he gave me, but they wouldn’t accept the $100. They said the bill was too big. So, I paid for his coffee with my own money and ran back to the photoshoot to deliver it,” Roberson said. “I gave him his coffee and his money back and explained what happened. He looked surprised and told me to never spend my own money for work.”

Rosie explained that Wooster then took her under his wing and became an important mentor. She said that their personalities “hit it off so well.”

Roberson said her time working at Forty Five Ten was the big start to her career. She learned that there are no small tasks and precision is key.

“[I learned] to be a hustler,” Roberson said. “Do things fast and right and always say yes you can do something. Hustle is so important to being successful.”

After working at Forty Five Ten, Roberson started a “super entry-level job” as the marketing and events coordinator at Modern Luxury, a luxury lifestyle publication. Due to what she had learn thus far and becoming close to the editor-in-chief, when the assistant editor left the magazine, Roberson was offered the job.

“Grit and luck got me where God wanted me to be. I got that [Forty Five Ten internship] because I was just confident and went with my gut and asked questions,” she said. “I didn’t even want to go into fashion at first. I wanted to be different than my mom because she’s a fashion designer and I grew up in the fashion world. But fashion is booming in Dallas and it comes naturally to me.”

Roberson has no real plans for the future.

“I kind of fell into the [fashion industry] completely and I’m taking life as it comes,” she said. “I want to see where my passion can take me.”