Ominous clouds loomed over the outdoor space behind The Wild Detectives café Thursday evening, but the threat of thunderstorms didn’t faze the members of the avant-pop band Reliant Tom and their local guest dancers, who were set to perform in just one hour.

Reliant Tom is a two-member avant-pop band started by SMU alumna Claire Cuny and her partner Monte Weber. The group incorporates vocals, instrumentals and musical tech with abstract dance performance in their concerts. The group has received attention from publications including The Deli Magazine (NYC) and Audiotox.

Cuny’s sister Grace Cuny, who is also an SMU alumna who performed in the show, explained that Claire has merged her talents in dance and music from her time in college, where she received a B.F.A. in dance performance and performed in university musicals. After moving to New York City, Cuny was a part of multiple bands until she created Reliant Tom with her partner Monte Weber, and the rest is history.

Before the performance, the musicians and dancers helped to move the equipment inside when the threat of rain appeared imminent, and then back outside again when the potential for severe weather passed. These sudden changes immediately before the show did not seem to affect the performers when the show began, as they seemed completely composed while performing even though their rehearsal time had been cut short by moving equipment.

Marie Lawrence, one of the dancers and yet another SMU alumna, shed some light on the group’s ability to adapt at the last minute when she explained that the performance as a whole was the product of only one week of rehearsals. Evidently these performers were already accustomed to last minute production and alterations. Even with this abbreviated rehearsal schedule, Lawrence said that the “simple and efficient rehearsal process allowed [the dancers] to quickly absorb the choreography pretty easily.”

At the beginning of the performance, the dancers held small lights that accented the pathway of their arms as they moved fluidly through the space. These lights initially seemed to be simply a prop to augment the movement of the dancers, but in a subsequent song, the dancers used the lights to mimic using a lit up phone screen. As Cuny and Weber performed, the dancers sat idly on the stage and seemed to ignore the performance going on right next to them, starkly contrasting their previous dancing.

Claire Cuny explained to me that this pantomime representing one’s absorption with technology was meant to represent the group’s “mixed feelings about social media.” 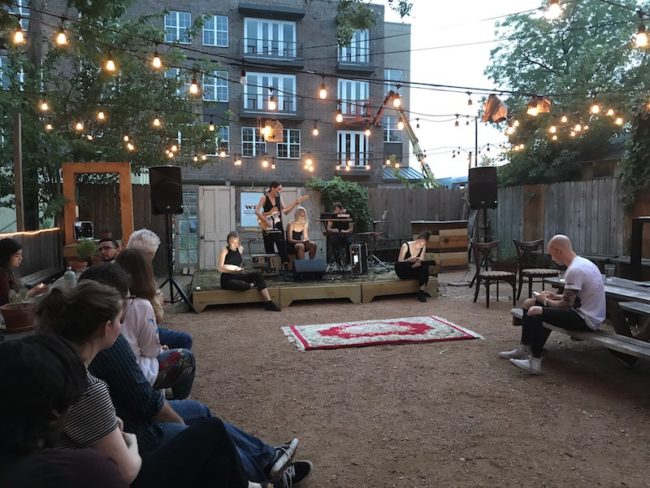 Cuny continued to explain, “We wanted to make a statement on the passive age we live in and start a conversation about our absorption with social media, where people share a post on Facebook and think they’ve made a change.”

In the second half of the performance, Claire Cuny performed with her sister using chairs on a small area rug. The sisters moved seamlessly together with periodic pauses in abstract shapes. In my conversation with her before the show, Grace Cuny revealed the personal importance of performing this duet. Cuny explained, “Being the little sister, I always looked up to Claire and her work, so working on this duet with her and collaborating with her on an equal level was a big deal for me.”

At the performance’s conclusion, the dancers gave out flowers to thank the audience for attending the show, and the dancers performed and improvisational section. Instead of planned movement, the dancers spontaneously respond to the music, allowing the audience to witness the dancers’ interpretations of what the audience was hearing in the moment.

After the performance, I got the chance to speak with Christopher Dolder, the recently appointed chair of the SMU Division of Dance who attended the performance to support his past students. Dolder noted that the “nuanced connection between the movement and the music allowed the audience to be a part of an experience, not just witness a show.” The audience’s involvement in the experience was evident as the group concluded their last song and the final soloist exited the space. Cuny thanked the audience, and after enthusiastic applause, the audience sat for a few moments in a reflective silence before moving to converse with those around them, highlighting what Dolder described as an “ambient dream state” created by the performance.