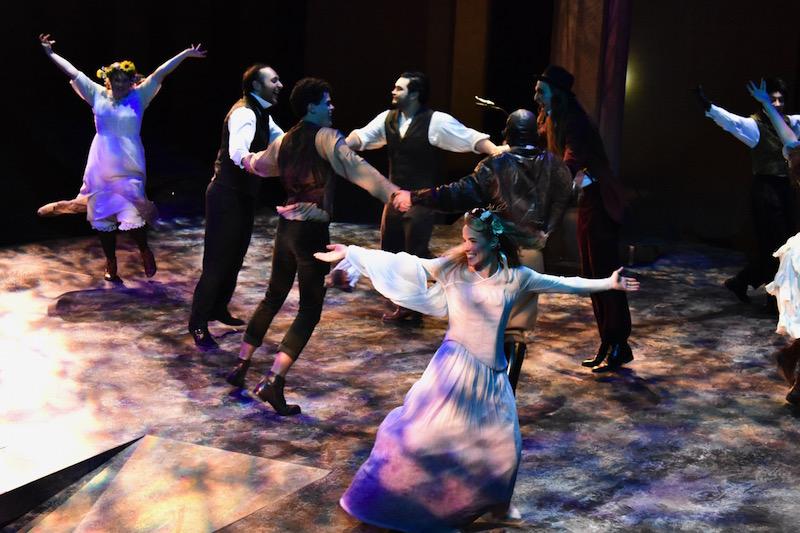 The Bard of Avon’s work graces the stage yet again.

The popular comedy “As You Like It” comes from the middle of Shakespeare’s career, just before the turn of the 16th century. As expected of a comedy, the play entertains a variety of themes such as love, marriage, mistaken identity, gender. The list could go on. Defining the work in more ways than one, leading lady Rosalind takes the stage.

Before “As You Like It,” the female characters in Shakespeare’s plays tended to have less agency. There was the famous Juliet, of course, but even her dramatic role had its limits and her story arc ended in tragedy. Portia (“The Merchant of Venice”) is the closest to Rosalind’s character, as she herself briefly takes charge and dresses in the guise of a man. However, this moment and Portia’s role in general are overshadowed by her male counterparts. Other well-known leading ladies– Cleopatra, Lady Macbeth, Desdemona, etc.– did not emerge until later in Shakespeare’s career. Keeping this context in mind, Rosalind’s strength as the female lead is significant.

Back to the play…

Rosalind is one of the exemplary Shakespearean heroines, and not just in terms of line count. She is vivacious and has contagious spunk that is especially apparent when she trades in her dress for trousers under the guise of Ganymede. Her wit is impeccable too, as she has some of the best lines besides Touchstone, the clown. Due to the “rom-com” genre, there are some aspects of the story that may feel somewhat clichéd. However, Rosalind’s personality brings new life to the love-at-first-sight trope.

Rosalind is not the only character to shine, though. Humorous and spirited characters dominate the cast, from larger roles– Celia, rebellious Orlando, tyrannical Duke Frederick– to smaller ones, such as Jaques and his wry melancholy. The actors do well in illustrating these varying personalities and complexities in their relationships with each other (and believe me, there are many).

Another compelling element of “As You Like It” is the setting’s duality: The Court of France to the Forest of Arden. The French court comes to represent a civilized and orderly place, while also being an area of danger for our protagonists. It is the realm of Duke Frederick and his cronies, as well as scheming Oliver.

The Forest of Arden, however, comes to be something else entirely. It is a place far removed from civilization, and the rules of society do not exist. This idea is apparent even in passing moments, such as when Rosalind (as Ganymede) meets Orlando in the forest and asks for the time.

ROSALIND.
I pray you, what is ’t o’clock?
ORLANDO.
You should ask me what time o’ day. There’s no clock in the forest.

Arden becomes something wholly separate from civilized society, almost teetering on the edge of being mystical or fantastic. During the Arden scenes, the stage lighting is especially helpful in turning the forest into a timeless and dreamy location. The collection of soft pink, orange and violet hues, coupled with the lattice pattern embodying tree branches, turns the simple stage into something of a fantasy.

A majority of the humor in the play comes from love and how it is constantly frustrated. Orlando meets Rosalind, in the forest but does not realize it since she is disguised as a man. Given the advantage of being incognito, Rosalind decides to coach him in the art of wooing (for her benefit, no doubt), even requesting his calling her “Rosalind.” As one would expect, this leads to priceless awkward moments where the lines between affectation and actual attraction blur.

Oh, but let us not forget the love lives of everyone else. Touchstone getting cockblocked becomes a trend. Silvious wants Pheobe, yet Pheobe eventually wants Ganymede (Rosalind). Even Celia gets some action when Oliver, having turned a new leaf, enters the picture later in the play. From all accounts, the sexual tension is relentless and hilarious. Alas, all good things must come to an end though and eventually, these convoluted relationships must be restored. What better way to do so than a quadruple marriage?

All joking aside, the comedy ends happily as it should. The couples marry, and the last few minutes of the play consist of merry dancing and lively music. Fit with a talented cast, vibrant characters, hilarious musical numbers, incredible wit and romance, this play checks all the boxes and really does serve up the performance “as you like it.”